Why Are Huskies So Vocal? It’s More Than Just Their Ancestry 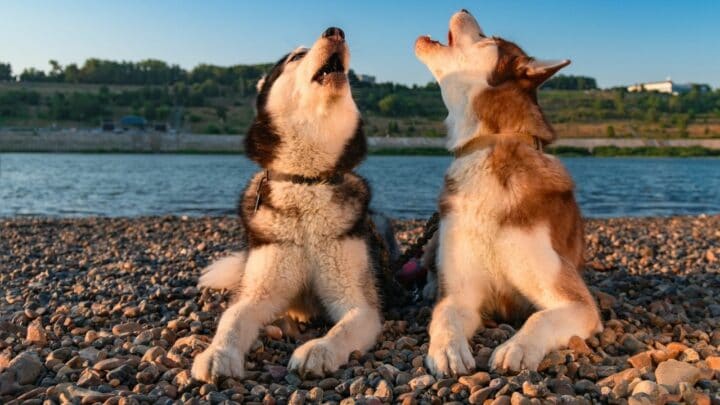 We’ve all seen those adorable videos where huskies are constantly making silly noises.

Or you might be one of those owners that are met with a full-blown husky temper tantrum any time it’s time to leave the dog park.

The question is, why are they so vocal? Do they just like the sound of their own voice so much that they’d like to share it with the world?

In this article, we will look at the deeper meaning behind the impressive range of sounds that huskies make and why they’re making them.

Why Are Huskies so Vocal?

Huskies are a breed that is often described as talkative. Huskies make noises that can be defined as howling, chirping, whining, moaning, and so-called talking, but they rarely bark. The main reason is due to their genes. As Huskies are pack animals, they constantly communicate with those around them to convey their mood, demands, and to interact.

What These Husky Sounds Mean

Huskies are pack animals and are also working dogs. When in a working environment, Huskies should be able to communicate both with their handlers and among themselves.

This is where the range of sound comes into play.

One of the reasons that may make you smile is that once you own a husky, you are part of their pack.

That leads them to vocalize their different moods and feelings that they are talking back to you when you talk to them in an attempt to mimic your voice.

Huskies also love the sounds of their own voices.

So, whether it be in an environment where they are working dogs or pets in your own home, they want to constantly communicate.

The type of sounds that they are making and the pitch can mean several different things.

Much like when we talk to each other, the different tones of our voice and how it is portrayed, huskies communicate their feelings and demands in different pitches.

What Huskies Try To Say

Dogs have a far wider wavelength of hearing and they can hear sounds miles away that we can’t.

Dogs can hear sounds that are of such a high frequency that they are undetectable by the human ear.

Often, times your husky could be ‘talking’ back to a dog that is further down the street or expressing discomfort or annoyance at a high-pitched sound.

Sounds at such a high frequency are far higher than what we can hear, and can cause a response from your husky.

They often respond to surrounding sounds of different pitches (low, high, and, of course, the frequent sound of sirens or horns).

Being pack animals is in their genes, so they often experience separation anxiety. You know the feeling, you leave and as soon as you shut the door you hear howling.

This is their way of saying that they do not want to be alone.

While separation anxiety is a hard habit to break, having another dog around can minimize the anxiety caused by your husky and maybe make your neighbors a little happier.

When they’re upset about something that they don’t want to do, they’ll tell you.

Huskies will wail, howel, and grumble when they don’t want to do something, throwing a temper tantrum of epic dog proportions.

Sticking with their big personality traits, huskies aren’t afraid to tell you when they want something.

If you don’t make dinner on time, expect a very grumpy husky to let you know that you are in the wrong.

They also are more than happy to try and sing along with your music or a television show that you have on.

Huskies are also very high-energy dogs, and they need plenty of exercises and mental stimulation daily.

They can be very vocal in an attempt to tell you that you are not giving them enough of either and that they are bored.

Frequently Asked Questions About Why Huskies Are So Vocal

How do I train my husky to be less vocal?

While huskies are highly intelligent and are apt to learning new commands, they will always be vocal dogs. Training your husky the commands ‘quiet’ and ‘speak’, while providing plenty of positive reinforcement may help cut down on some of the noise that they make.

Will getting two huskies make them less vocal when I’m not around?

With huskies being pack animals, having two when you are out of the house means that they are not totally separated from their pack. This can lower their anxiety as they know that they have each other until you return.

Do huskies stay as vocal throughout their life?

As huskies age they tend to become less vocal, not to say that there is ever a period where they won’t be. Older dogs begin to have a lower range of hearing, which means they are less likely to respond to as many noises around their environment. Older huskies also have the tendency to mellow. With more time spent lounging outside or in that perfect sunny spot, they won’t be as inclined to demand your undivided attention as frequently.


Why Are Huskies So Vocal: Lasting Impressions

While much of it comes down to genes, huskies have definitely grown to display big and unique personalities.

They are always willing to tell you what is on their mind, and they want to be sure that you’ve heard them loud and clear.

Huskies are vocal for many reasons and it all revolves around their desire and instinct to communicate with those around them. 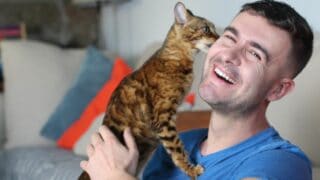 Previous
Why Do Cats Bite Your Face? Stop It! 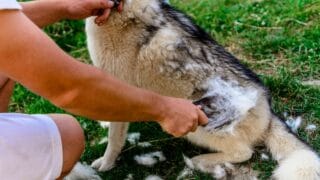 Next
When Do Huskies Shed? Now I Know!