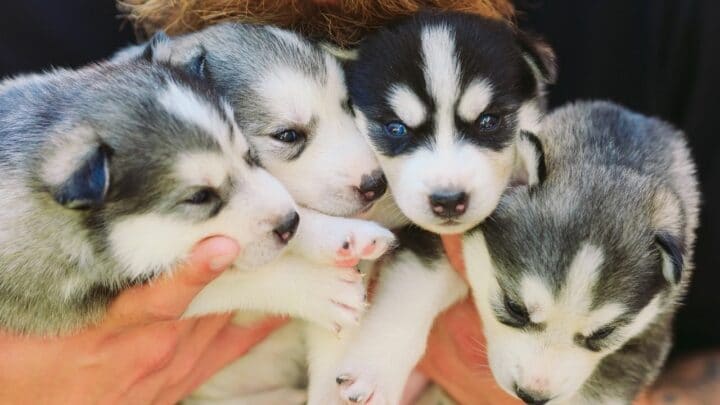 These furry northern breed dogs are naturally strong and agile. Despite the aggressive looks of Siberian Huskies, they love cuddles.

Huskies love snuggling, nuzzling, and kissing all day long. With their cuteness, you will never refuse to give them everything you’ve got.

Huskies’ characteristics are being intelligent, lovable, and playful with children.

They also have a sensory alertness instinct and that makes them good watchdogs. That is why many fur families adopt, care for, and breed huskies.

How Many Puppies Can a Husky Have

As a general rule, a Siberian Husky usually gives birth to four to six pups in a litter. But of course, the number of born puppies depends on various factors as the mother’s health, weight, and age.

Number of Litters a Husky can have per Year

Litter is what determines the number of puppies that dogs give birth to.

Siberian huskies usually give birth to four to six puppies per litter.

It’s not every birthing period they give birth to the same number in a litter. But a veterinarian can estimate the litter size of your pet mother husky.

The first litter may have less than four puppies. And then the succeeding litters may have five, and then six.

If a husky is regularly heating every six months, more likely she can conceive twice in a year.

Let’s say she started being pregnant at the age of two until she was seven years, she could have 10 pregnancies.

But of course, you would not let your pet get pregnant every heating period. They need to complete their reproductive cycle that handles fertilization and healthy pregnancy.

The litter size of a dog determines the number of puppies inside the pregnant husky’s womb.

It is important that your pet gives birth at the right age bracket and with a balanced diet because these factors are proven to affect their litter size.

The health of the dog plays a big role that influences the litter size of a pregnant husky. A healthy dog during her pregnancy has a good litter.

Make sure that your husky is seeing her vet, especially if you are planning to breed her. Pregnancy for dogs, just like humans, requires attention.

As the matter of health is concerned, we are also talking about its diet and weight.

Typically, an obese female husky is likely to have fewer puppies than the one with normal weight.

An underweight husky has the potential to get small litter.

It is important to bring your pet to her vet a couple of times during her pregnancy period.

Her vet will perform a checkup for her so you would know if she is having a balanced diet.

Aside from that, her vet can decide whether to give your pregnant husky a supplement or not.

Maintain good health for your Husky and aim to breed her between the ages of two and seven years.

When it comes to age, a husky that starts pregnancy at three is likely to have a bigger litter. That is as compared to younger than three and older than seven.

A younger than a three-year-old puppy can have a small litter. And a mother husky that gives birth at seven years old will start to reduce the number of puppies.

As the dog gets older, the number of puppies it gives birth to decreases since its body changes as it grows old, just like humans do.

Some fur parents think that when a mother husky has large litters, its girl baby huskies will have the same as well.

But the fact is, the size of a litter can’t be passed down to the next generation of huskies.

Thus, the body size of a dog can tell if your husky will have big or small litters.

How Frequent Can A Female Husky Get Pregnant

A well-treated husky is more likely to give birth five litters or more in her lifetime.

The number of puppies that a husky can conceive depends on the maturity level of its health.

Weight and age have a big influence on how many times a husky can get pregnant.

It is important that the husky is physically matured and fit during her heating period. Dog’s heating period starts as the dog’s vulva bleeds and changes its appearance.

Just like the other dogs, huskies only heat every six months. Sometimes, however, the cycle comes every eight months.

And when the heating period for the husky comes, it mostly lasts for three weeks.

Typically, it ends on the second week up to four weeks.

A mother husky must be of moderate weight, not underweight or overweight as weight also influences the healthy physique of the puppies.

A healthy husky can give birth many times. So if you want to breed your husky, you need to secure its health.

As the female husky reaches two years of age, she can already get pregnant.

When getting pregnant, her gestation period can last for 63 days.

Yet, she can conceive until she is seven years old.

Meanwhile, a male husky can still bear puppies until he is 13 years old.

Though, there are still huskies who are able to conceive even when they are nine years of age.

You must also know that an ill and weak puppy has a little chance of getting pregnant for more pups as its body can only give birth to the number that it can hold inside her body.

Thus, there’s no specific number of how many times a husky can get pregnant. Their pregnancy depends on the factors affecting their pregnancy. 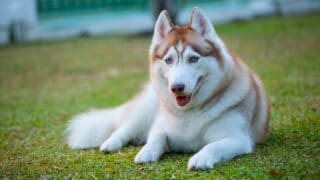 Previous
Why Are Huskies Stubborn? Find Out Here! 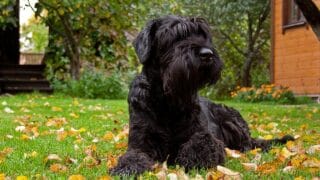 Next
How to Groom a Giant Schnauzer — Things To Remember

[…] you have not had the experience of hearing a husky speak unusually, you should have an idea about what does a Husky voice sounds like and why it is […]