One of the more vocal breeds, the Siberian Husky or Huskies are working-class pups, but they have a personality that is unique to dogs, in general.

In fact, some of the sounds that they make are eerily close to humans and causing their owners and others nearby to give them a second glass when they are speaking.

If you have not had the experience of hearing a husky speak unusually, you should have an idea about what does a Husky voice sounds like and why it is different from others.

When you hear Huskies ‘speak,’ you may notice that it’s often higher-pitched than other dog breeds. Depending on what they’re trying to say, their tone could shift substantially, indicating that they want to play or there’s something to be concerned about. Their voice can simulate other common sounds such as sirens, cries, or even your voice as the owner.

One of the biggest reasons that Huskies have the ability to communicate with their voice unlike most breeds is because of their close relationship with their wild wolf ancestors.

Wolves in general are known to be in communication with others since they often live, hunt, and travel in packs.

Being able to communicate through the changing of tones and sounds is common practice and something that is expected.

Fast-forward to today, the Husky is carrying that same idea of communication over to their owners as they are domesticated and found living among humans everywhere. 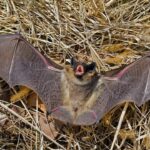 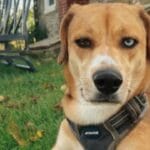 Some sounds coming your Husky may make with their voice is a response to their local environment.

If they hear sirens from an emergency vehicle or first responder within a mile of your home, they are liable to respond by making similar sirens noises, alerting you of a sound that you may not have heard yet.

For families with infants and small children, Huskies have been known to mimic the cry of a baby to alert the parents that the child is awake and needs attention.

Over time, if your Husky hears a certain sound over and over, they will start to associate that sound with a particular situation and use that to communicate with you.

Once they master a sound such as your doorbell or the locking sound of your car when you pull into the garage, they can start to mimic that sound and associate it to visitors at the door or you coming home after being away for work or errands.

Like many dogs, Huskies become attached to their owners and want to be with them around the clock.

Many members of this breed happen to develop separation anxiety that may be triggered by a sound.

Their response to your shoes being laced up and you grabbing your keys could be a cry when they are at their most vocal.

Anytime they take on stress or anxiety, they will start to voice their concerns and feelings through a level of whining and long howls that seem as though they are begging you to stay around the house.

Frequently Asked Questions About What A Husky Voice Sounds Like

My Husky makes a lot of sounds, but I have not heard him bark. Is this normal?

It is common for Huskies to bark minimally throughout their lifetime. In fact, most of the noise you will hear them make is them using their voice to try and communicate with you. While the Husky appears to be an aggressive breed where barking is common, most of these dogs do not often bark unless they are in distress or have anxiety about some trouble happening soon.

My Husky talks all the time. Is this level of communication normal?

Some Huskies are known to be a bit chattier than others. There are several reasons that could be causing this chatter, such as physical discomfort, anxiety, or simply boredom. If you notice an uptick in how much your Husky is talking, you should probably get the root of the problem right away.

I enjoy my Husky talking to me. How do I get her to repeat what she’s said?

Like any other command, you can train your Husky to repeat sounds in their voice that sounds like words. If there is something you enjoy them saying and want to have them repeat it for you regularly, you can reward them when they make the preferred sound by providing treats. Over time, they will understand that talk is desirable and will begin repeating it for you.

Whether you have a Husky currently or planning to get one in the near future, you should be aware of their communication methods.

After you identify what does a Husky voice sounds like and see what your Husky is capable of, you can move forward with trying to understand their communication.

Having the ability to shift tones in their voice and enable them all to familiar whine, they are able to have their needs addressed right away.

All dog breeds have their own way of communicating, but the Husky will use their voice to get their owner’s attention and get assistance with whatever needs they have.

Why do Huskies Talk? Ooh, Interesting!

[…] we think of husky dogs, we generally think of their striking blue eyes, distinct markings, and wolf-like […]

How Much Are Huskies? Whoah, Really!?

Why Are Huskies So Vocal? It's More Than Just Their Ancestry