I love reading supernatural stories, and in many of these, the hellhound features quite prominently.

It may be described as a pit bull or a rottweiler or a doberman even, but the hellhound is never just a dog.

It’s a hellhound, and that’s something entirely more frightening than a garden variety pooch. This got me thinking, just what kind of dog resembles a hellhound the most?

As I began my research, I realized that no single dog would meet all the boxes of just what a hellhound looks like.

After all, a hellhound is a supernatural creature, and like Cerberus, the two-headed guardian of the underworld, the hellhound would not fit most earthly creatures in its entirety.

So I decided to look for different characteristics in dogs, hoping to find the dog that meets most of the hellhound’s bloodcurdling features. This is what I found!

What Real Dog Resembles a Hellhound the Most?

There are 2 dog breeds that closely resemble a hellhound: the American pitbull and Doberman. This is because of their build, aggressive nature, speed, and intimidating aura. A black Belgian Malinois can also resemble a hellhound with its sleek build and huge jaws. Plus, its eyes do glow red.

After my initial research, I decided that there were three dog breeds that might earn the title of hellhound: The American pitbull, the Doberman, and the Belgian Malinois. 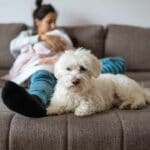 Each breed has its own uniquely hellish characteristics that may have inspired the legend of the hellhound if they had existed around the time of the legends being written. 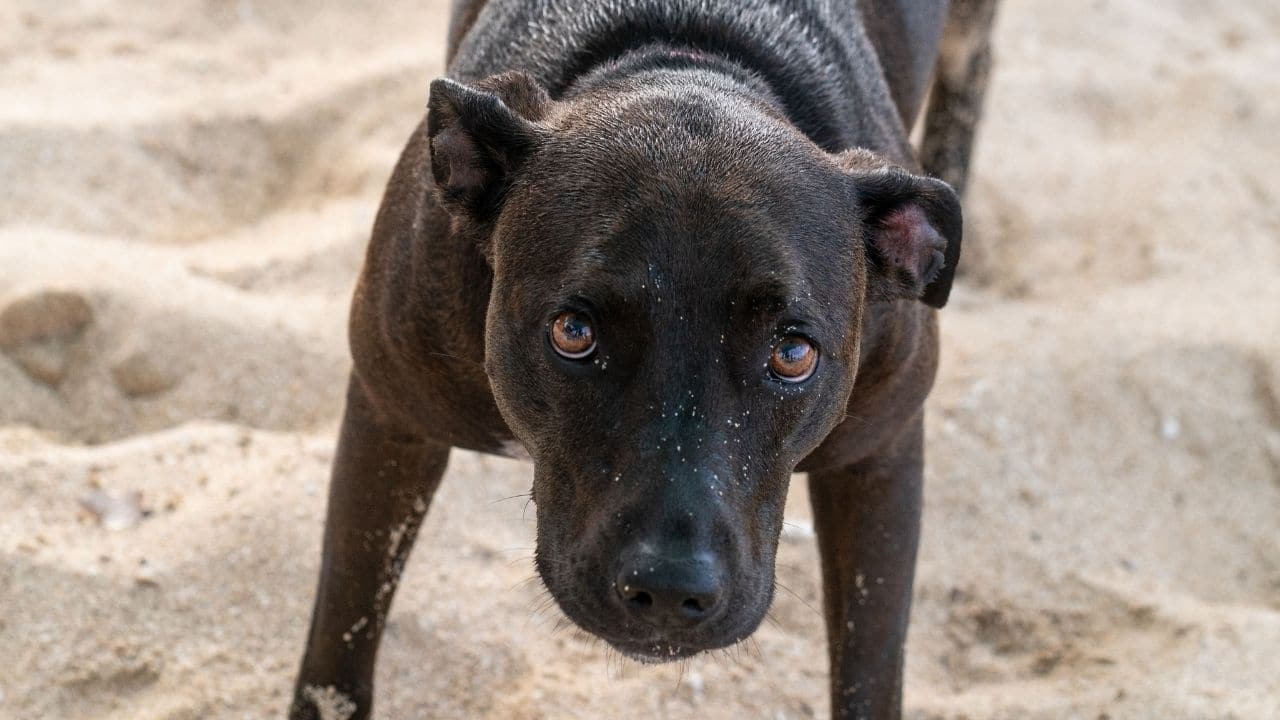 The pitbull, as it is commonly known, needs no introduction. It is the most dangerous dog breed according to many dog associations and government regulations across the world.

While this reputation is probably due to ignorance and poor training of Pitbulls, the reality is that these ferocious dogs are bred for fighting. Hence, it’s a common concern for new parents if it is safe to leave a pitbull with a baby.

Pitbulls have different coat colors, and the pure black variety is truly fear-inspiring.

With their sleek and hugely muscled bodies, they would seem to fit the bill of hellhound, though I considered that they are a little heavy in build for the mangy look that many hellhound descriptions from lore featured.

Additionally, the pitbull has brown eyes, which will glow yellow or green in dark lighting conditions since their tapetum lucidum does not contain the right amount of rods or cones to reflect the red spectrum of light. 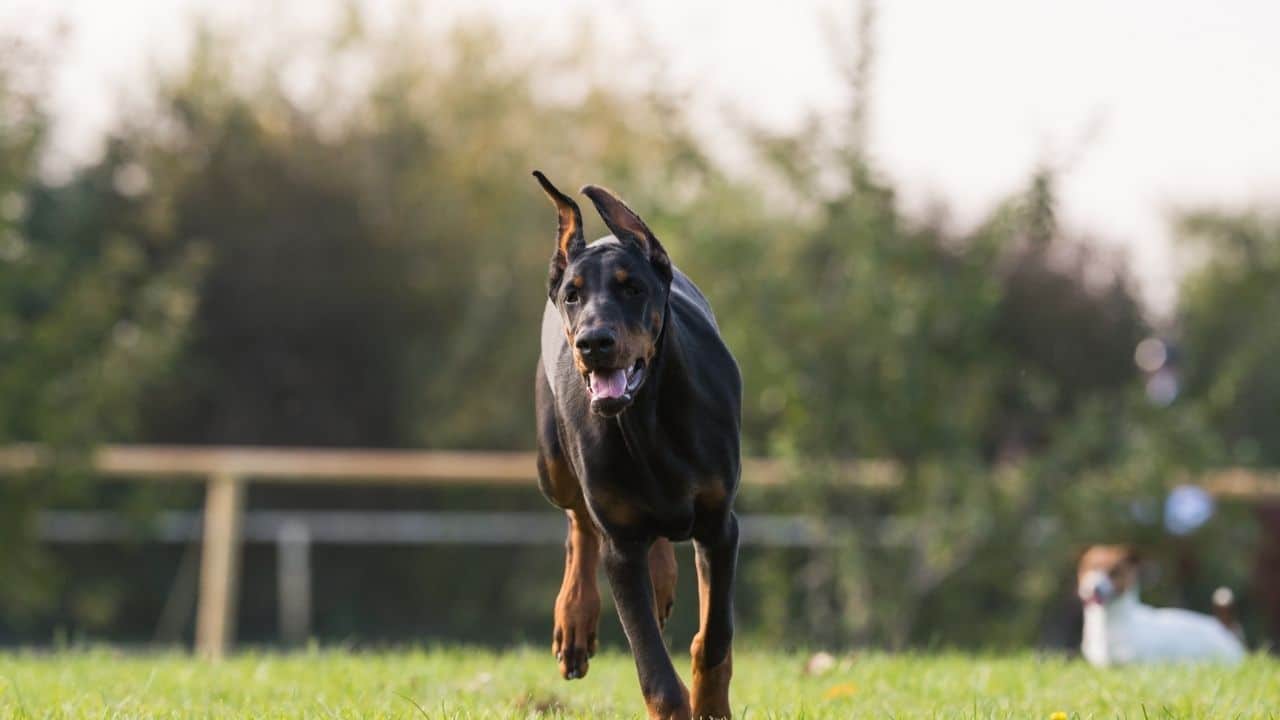 This terrifying dog instills fear even when it sits quietly, watching you with its large jaws ready to bite upon command. They are the right color and build too, with a more lean body and a sleek black coat.

Superbly muscled, Dobermans can easily fit the description of hellhound, and many movies have made use of this by using Dobermans as terrifying hounds that attack some human victim.

The Doberman is also incredibly loyal to their master and, being highly intelligent, they could be seen as the demonic hellhound that will relentlessly pursue their evil master’s victim.

With an excellent sense of smell, Dobermans can sniff out their victim, hounding them like the fabled hellhound would.

However, these terrifying dogs with their “horned” ears (when they have been cut by a breeder), don’t fit the bill on red eyes as their eyes also reflect yellow or green in dark lighting conditions.

Plus, it’s even possible that a purebred Doberman can have blue eyes!

This prompted me to look further for a more likely candidate. 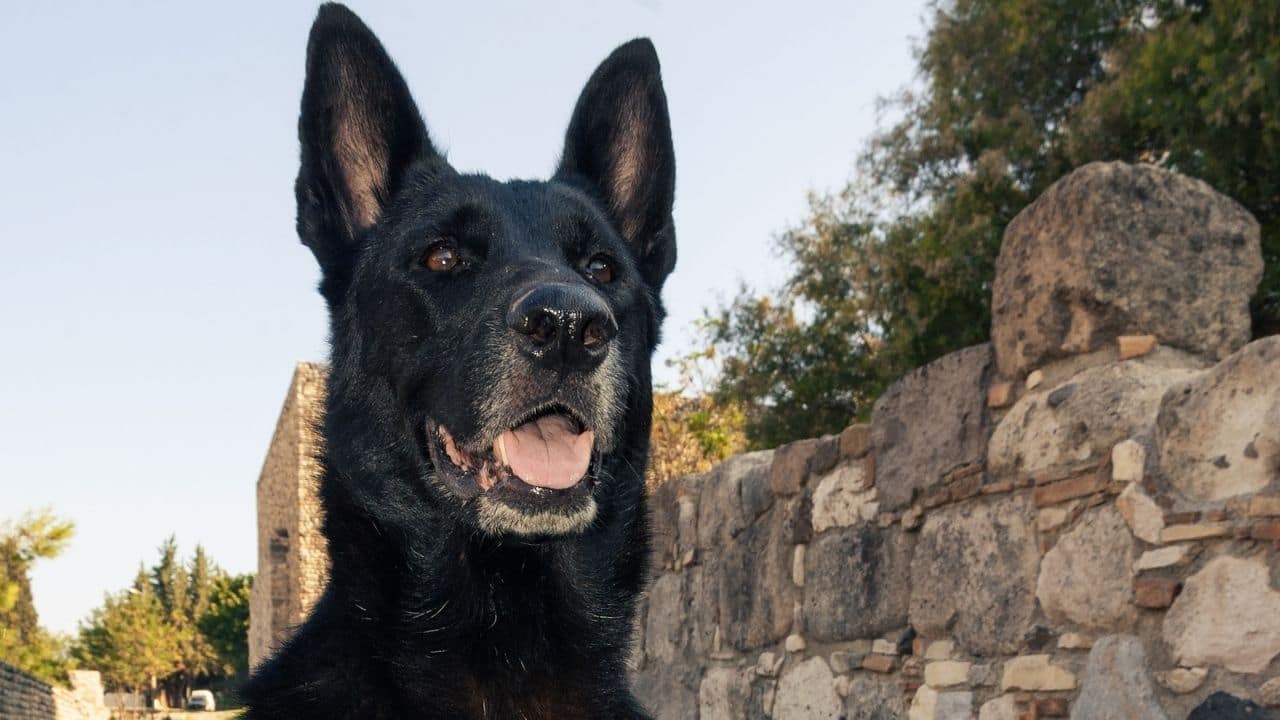 This is a dog breed that is less known than the American pitbull or the Doberman, yet it is equally ferocious and terrifyingly strong.

The Malinois, as it is more commonly known, has a bite force of 195 pounds per square inch (PSI), which is sufficient to inflict massive damage during a fight. And with their sleek and muscled bodies, they would fit the body shape of a hellhound.

While the Malinois was primarily bred as a sheepdog, it has been repurposed as a guard dog, a police dog, and more recently, as a military dog too.

They are high-strung, and if provoked, they can be incredibly aggressive. Belgian Malinois are often used by law enforcement for tracking purposes, and they are often trained to sniff for explosives since they have an incredible sense of smell.

Yet, the final feather in the hellish cap of the Belgian Malinois is that they can have pale or blue-colored eyes, which have a tapetum lucidum that will reflect red in dark light, making the Malinois the ultimate hellhound in the flesh.

What is Satan’s dog’s name?

According to legend, the devil’s dog is named Cerberus, and it is a large black dog with more than one head in some myths. It is said to guard the underworld, and in some myths, it is also sent to retrieve the souls of those who made a deal with the devil.

What type of dogs are hellhounds?

In Wales, a hellhound is seen as an English mastiff, with large jaws that hound the countryside at night. Today, any dog that is large and aggressive can be seen as being a hellhound, but the Belgian Malinois fits the description of hellhound best.

Where are hellhounds found?

Hellhounds are the guardians of the underworld, according to legend. However, they were said to be unleashed to do the devil’s bidding when a soul had to be collected, and they would then walk the earth.

Finally, I should mention that I own a Belgian Malinois. While my dearest Shadow is a real honey, he does have a dark side, and if provoked, you can clearly see the hellhound in him.

He is large, incredibly strong, and when he is chasing prey, he is single-minded in his purpose. At night, his white eyes have an eerie red glow, which makes even my heart quiver a bit.

Hellhound or not, the Belgian Malinois is not a dog breed to be trifled with.

What A Black Lab Coonhound Mix Looks Like - Cute!

[…] it comes to mixing breeds of dogs, black labs are a popular choice to mix with a variety of hounds, including the […]

How a Pug and Golden Retriever Mix Looks Like — Wow!