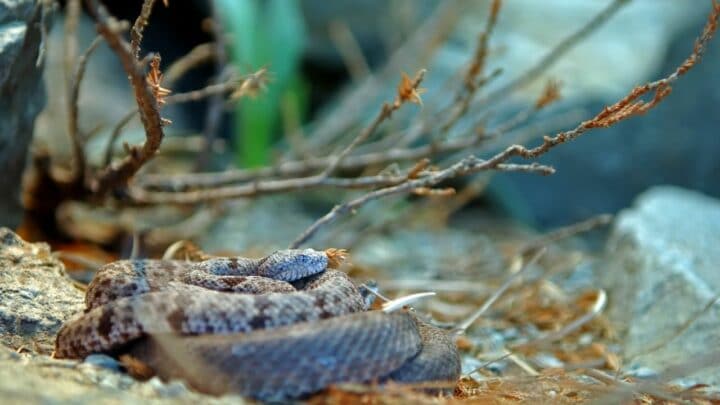 OK, so if you want to know what eats snakes, you are likely motivated by morbid curiosity, unless you are seeking a natural way of eliminating snakes in your backyard.

Well, the answer to this question is extremely broad, as many animals prey upon snakes.

Of course, if you are the owner of a pet snake, you may want to keep it caged to protect your snake from predators. The list of predators is very long, too.

In addition to several species of birds, there are quite a few animals that eat snakes.

Many birds of prey feed on snakes, but there are several other types of animals that will also eat snakes, including tigers, crocodiles, bobcats, snapping turtles, mongooses, and foxes. Surprisingly, many species of snakes eat other snakes. In some cultures, people may eat snakes as a delicacy. 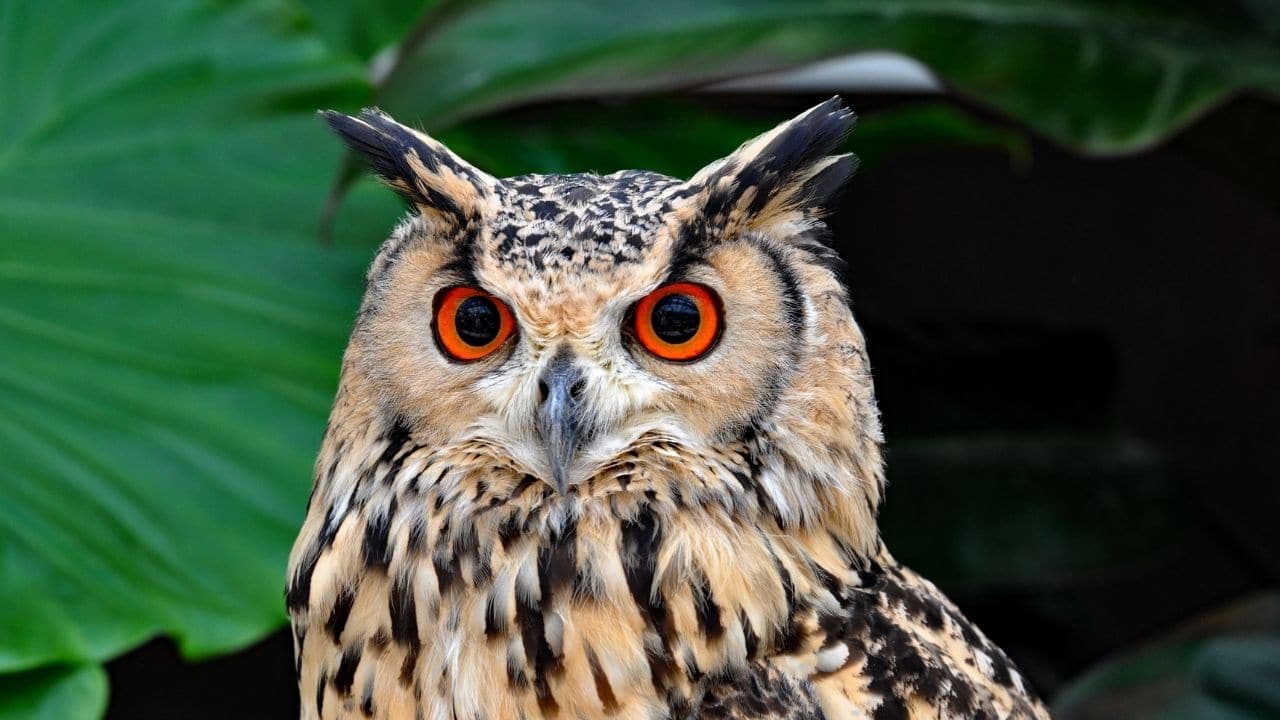 Many people have already figured out that an owl will quickly swoop down and devour a snake, or even a bat. Since owls and snakes are both nocturnal, they come out to hunt at the same time.

As snakes rely heavily upon smell to detect prey, they may pick up on the scent of an owl lurking in a nearby tree, but they can’t see exactly where the owl is.

Sure, the snake may attempt to slither under a rock, but the owl is faster and usually wins.

Hawks, especially red-tailed hawks, are another enemy of snakes. They’re capable of spotting their prey on the ground while they are in the sky thanks to their keen vision. This gives them the upper hand over the snake as they will fly lower and hover over their prey before moving in for the attack.

Snake eagles, secretary birds, and laughing falcons also eat snakes. A snake eagle’s specialty is hunting reptiles, and a snake doesn’t stand a chance against the beak and talons of an eagle.

While most falcons rarely eat snakes, the laughing falcon seems to take pride in doing so, as this falcon can safely devour even the most poisonous snake.

On the other hand, secretary birds have a unique snake-killing tactic. They simply stomp on them until they die. Then they have them for dinner. 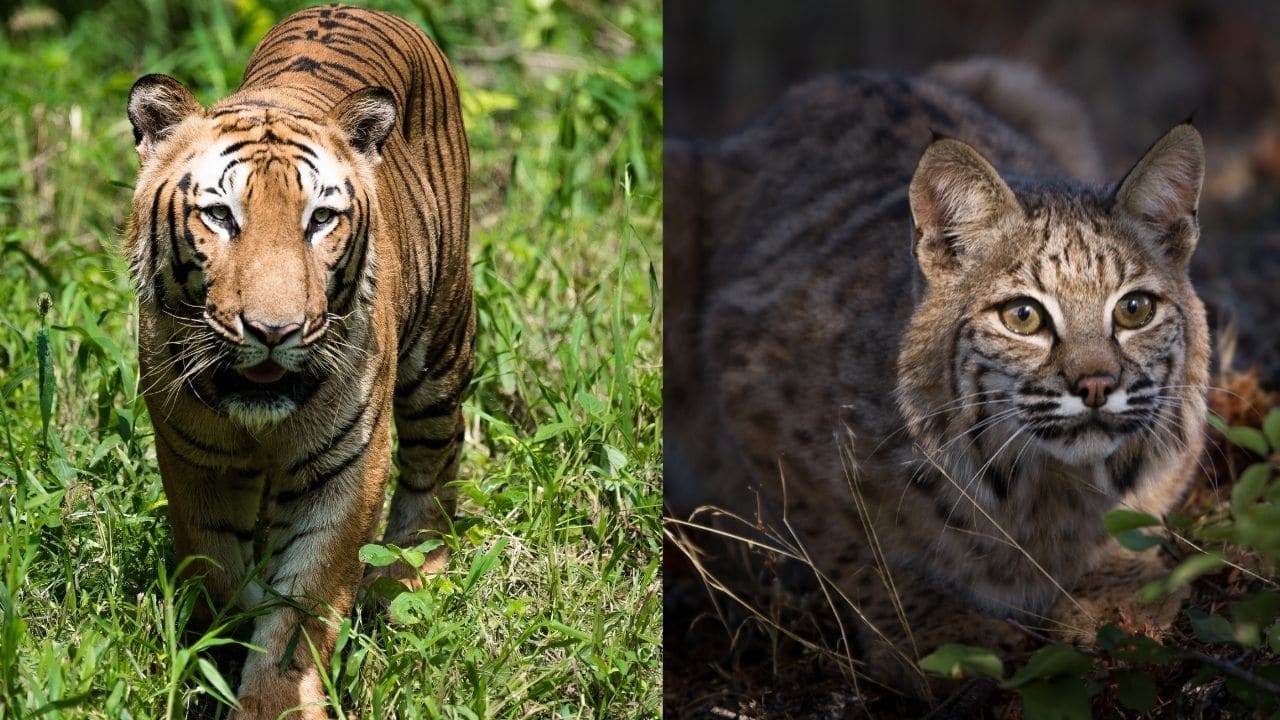 Tigers and bobcats usually prefer not to eat snakes. As both of these animals are larger wild members of the cat family, they are carnivorous and commonly prey upon smaller animals.

While a tiger can take on a wild boar for dinner, bobcats are slightly bigger than house cats and will typically choose to prey on chickens or deer.

Snakes aren’t part of their regular diet. As a matter of fact, a bite from a poisonous snake can take a tiger down.

However, when food is scarce, survival instinct will kick in, and while a bobcat would gladly substitute a snake for a small mammal, a tiger would proceed with caution when settling for a snake. 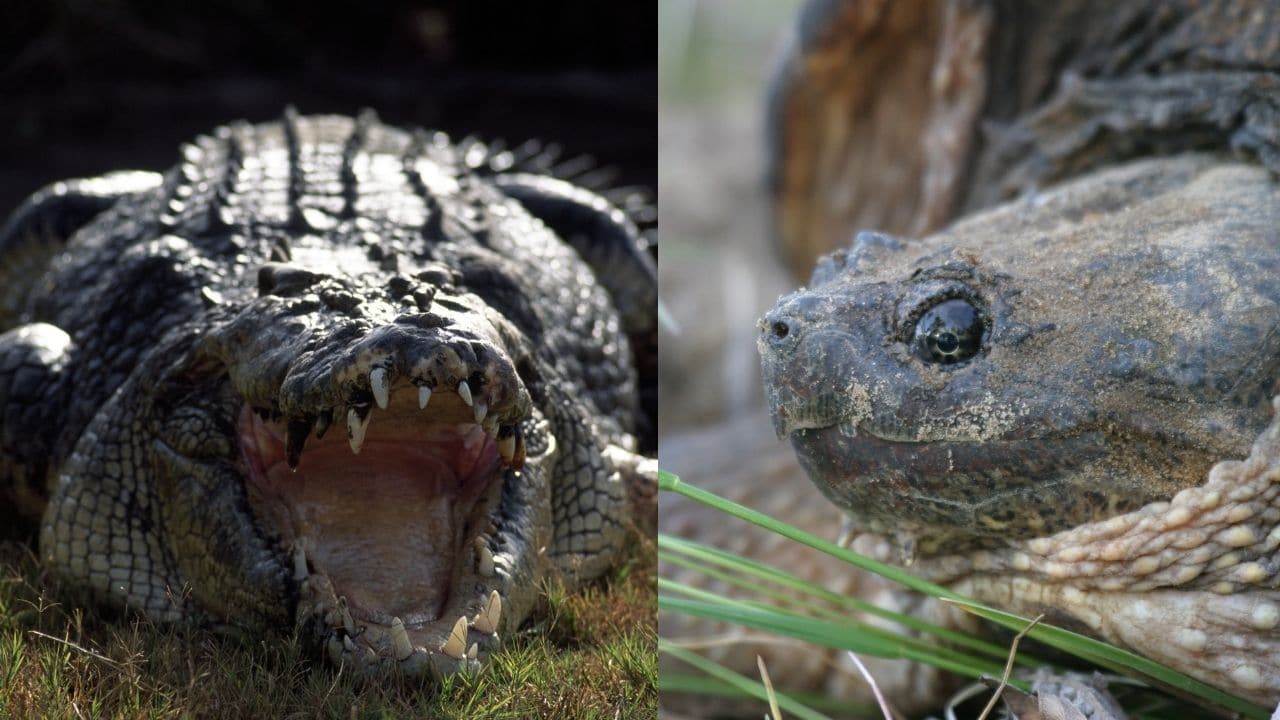 While most turtles have the reputation of being peaceful creatures, snapping turtles are known to be carnivorous and aggressive. Although they lack teeth, their beaks are still very sharp.

They will often prey upon frogs, fish, and snakes that are in the water or close to the bank.

Now, crocodiles are notorious predators, but did you know that crocodiles would feed on other reptiles? Yes, crocodiles do indeed eat snakes.

Thanks to their thick, scaly skin, crocodiles are unfazed by snake bites. 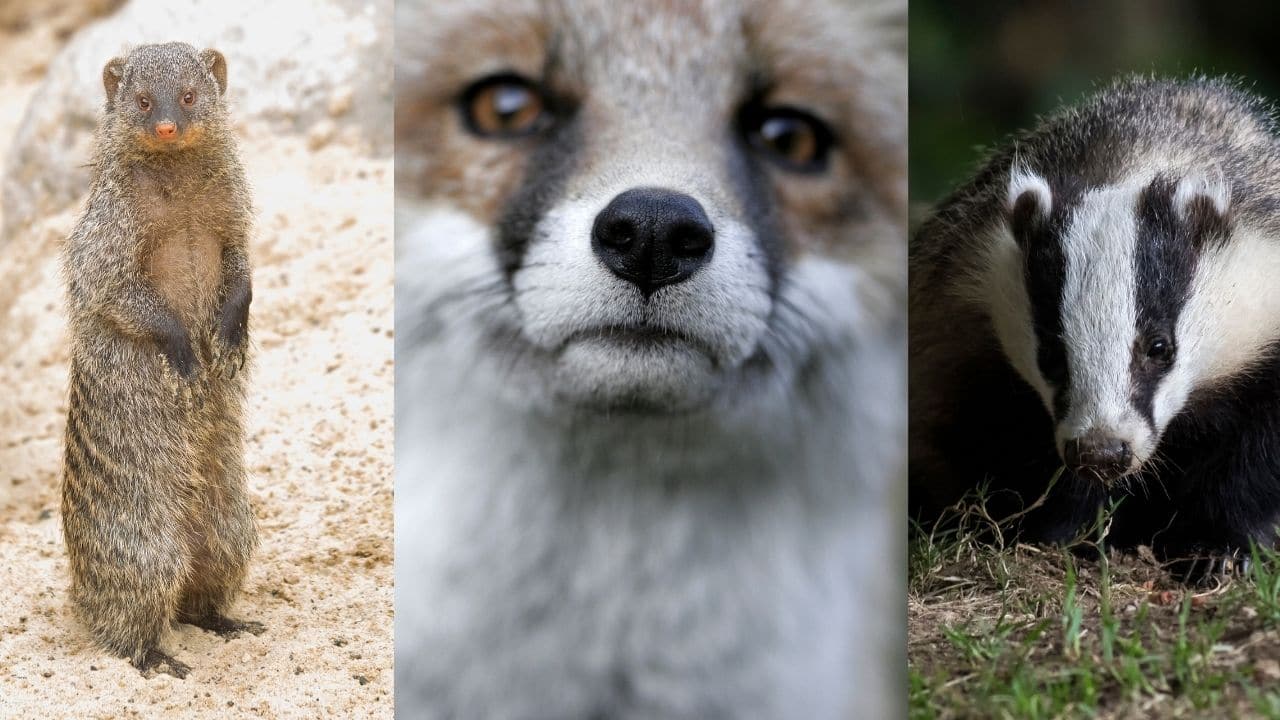 When speaking of the mongoose, the instinct is to kill or be killed, literally. The mongoose is actually a common prey for snakes, but it can go the other way around, as well.

Mongooses don’t eat snakes because they enjoy the taste. Instead, it’s a survival matter for these small mammals.

Although foxes are omnivores who usually feed on plant life, when cold weather approaches, they are forced to eat other animals to survive.

While foxes don’t like eating snakes, they will definitely prey on a snake if they are hungry enough.

Honey badgers are small, carnivorous mammals that regularly prey upon snakes and other reptiles. They have keen hunting skills, too, and often win battles with deadly venomous snakes. 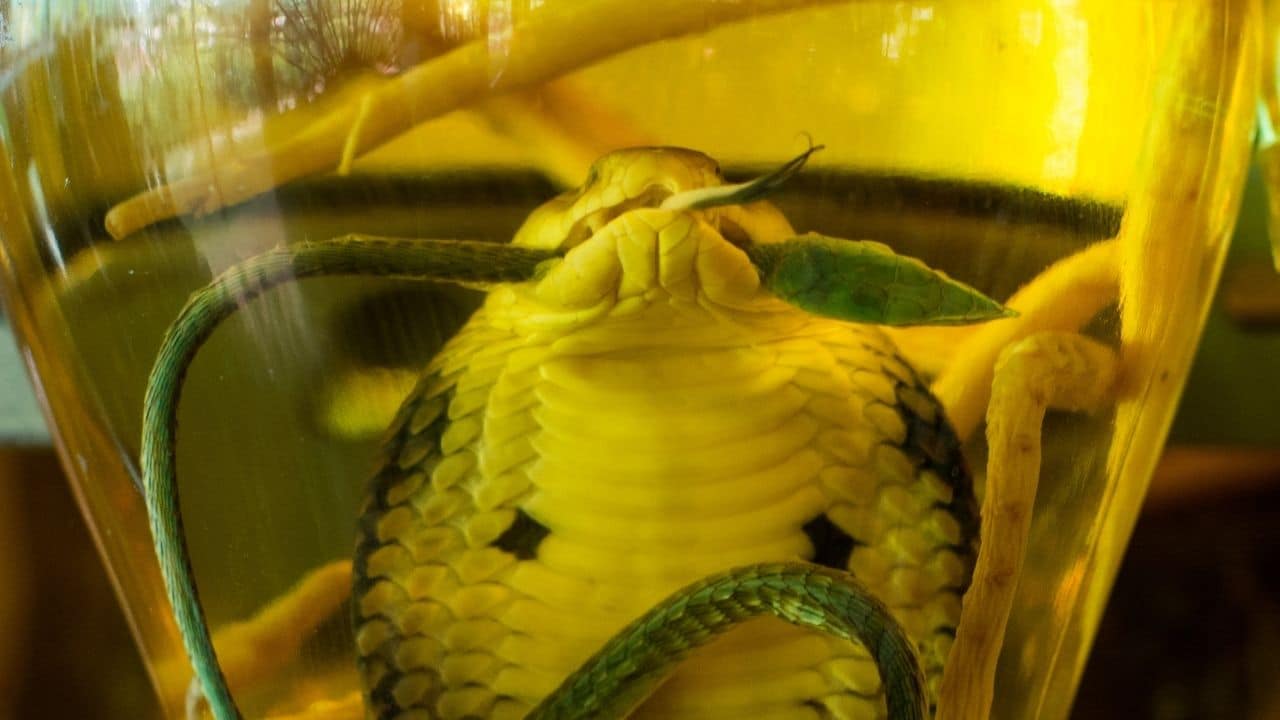 Out of all the creatures that eat snakes, these two may very well be the strangest. People who live in Southeast Asia do eat snakes…and consider them to be a delicacy!

If that doesn’t sound strange enough, consider the fact that many snakes eat each other! Yes, there are some snake species, such as the coral snake, that are cannibalistic.

What Animals Keep Snakes Away?

Mainly foxes and raccoons, as they will both occasionally prey upon snakes. Surprisingly, it is claimed that cats, chickens, and turkeys are also effective at chasing off snakes.

What Kind of Predators Eat Snakes?

While there are many animals that will eat a snake, other snake breeds and birds are their two main predators.

While there are several different animals that eat snakes, some will only settle for a snake as a last resort.

Since it is unlikely that you will adopt a fox or mongoose, you can keep snakes away simply by having a house cat and a few chickens in your yard, unless, of course, you decide to eat the snake for dinner yourself. 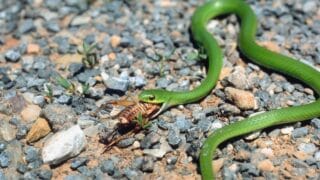 Previous
What Do Snakes Eat? Really?! 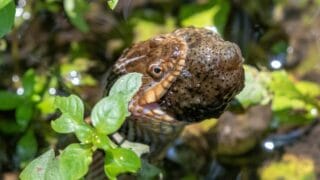 Next
What Do Water Snakes Eat? Interesting Read!

[…] snakes can be incredibly intimidating. They swim alongside us in lakes, rivers, and streams, often […]