Snakes may not be everyone’s cup of tea, but there is so much about them that is truly fascinating. One of their most special characteristics is how they drink water.

Like most other animals, serpents require water to survive, but their tongues are not adapted for lapping it up.

Read on to find out how this unique creature quenches its thirst.

How do snakes drink water?

A snake’s tongue is forked, making it impossible to scoop water into their mouths. Instead, they have an abundance of small folds on their lower jaws acting like tiny sponges. By pressing their jaws down into the water, they absorb it into their bodies through capillary action, then using muscle pressure to help transport the water to the rest of their bodies.

How a Snake’s Tongue Works

Most of us are accustomed to seeing animals drink water by lapping it up with their tongues and funneling it into their mouths. This is not the case with snakes.

Their split-fork tongues cannot scoop water, nor do they open their mouths very wide when their tongues are in action.

Snakes use taste to learn about their environments, picking up scents around them before retracting their tongues into built-in “sheaths.”

Given this adaptation, they have a different and unique way of hydrating that doesn’t involve their tongues at all. 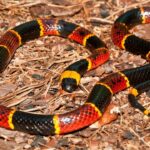 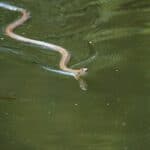 How Snakes Use their Jaws for Drinking water

A snake’s jaw can expand to quite a significant degree when it is eating. Indeed, their cleverly designed jaws are what allows them to hydrate too.

The bottom jaw of most snakes is lined with folds or creases that expand outwards when they consume prey. These same folds behave like sponges when it comes to drinking water.

This requires some muscle action, as they need to push down on these folds to propel the water into their bodies.

This incredible drinking mechanism works in tandem with another biological adaptation comparable to siphoning.

When drinking, many snake breeds “seal” their mouths to stop water from escaping. Consequently, the front of their mouths resembles a little straw through which they slurp up water.

Like all land-dwelling animals, serpents need water for them to survive. While it was believed for a long time that snakes did not drink water, science has since debunked this myth, and studies have shown that they will dehydrate and die without it.

Snakes do get a fair amount of water from the food they consume, but not all of it, and certainly not enough to sustain them. Therefore, they need to drink from freshwater sources regularly.

How Much Water Snakes Need

How much water a snake needs really depends on the snake. Some snakes do not drink very often, as they are used to harsh climates like deserts and receive some of their hydration from their prey.

Others may use bodies of water to get their water fix.

Pet snakes are similar. They will drink as much as they need, so it’s advisable to have fresh water on hand for them at all times. Unless they are ill, they will drink when they are ready.

Both wild snakes and pet snakes can absorb water in several different ways. Do not be too alarmed if they are not drinking regularly.

They might be taking water in through their permeable skin while lavishing in their water bowls.

How to Tell if My Snake is Dehydrated

Dehydrated snakes cannot regulate their body temperatures correctly, digest properly, or shed their skins completely, so it is paramount that they receive enough water.

Without adequate hydration, they can suffer from organ failure, which, if left untreated, can be fatal.

Signs that a snake may be suffering from dehydration include weakness and lethargy, sunken eyes, dry, wrinkled skin, loss of flexibility, infrequent defecation, flaky skin, and sticky membranes.

If a snake owner notices any of these signs, urgent attention needs to be given to the animal to prevent further illness.

If dehydration is already severe, it is best to seek veterinary help.

Can my snake drink from a water dish?

Pet snakes should have access to a water dish at all times. It must be kept clean, and the water refreshed daily. Avoid using harsh detergents or strongly-scented soaps.

Tap water contains chlorine which may be unpleasant for snakes, so it is good to run tap water through a filter or purifier before giving it to them to help remove particle contaminants. Snakes should not be given distilled water, as it contains no electrolytes or minerals, which snakes need in their diet. Purified tap water or bottled water has traces of minerals and calcium, which are beneficial for snakes.

How do sea snakes drink water?

Even sea snakes need freshwater, which isn’t freely available in their salty homes. Consequently, they need to wait until it rains, which drops the salinity level of their environment by creating a temporary freshwater layer above saltwater. Then, they can drink and rehydrate.

If you’ve ever seen a snake drink water, you’ll likely agree that it is quite incredible to watch. How they have adapted to survive is fascinating.

For a creature with no arms and legs, they sure know how to navigate the world.

[…] my snake only eat mice, or do snakes eat other things too? Just what do snakes […]