What Animal Has the Most Stomachs? Most animals have stomachs. Notice we said, “most.” Some animals believe it or not lost their stomachs as part of the evolutionary process.

This includes the carp (which is a species of fish), and the platypus.  The platypus is considered part fish and part mammal and both the carp, platypus,

and other species without stomachs are considered rather prehistoric and base animals.

This is dating back 450 million years and scientists see no time that stomachs will be replaced in some animals that experienced this evolutionary process.

Glands were formed to replace the gastric juices that disappear with the loss of a stomach. The reason for the loss of the stomach in some egg-laying animals is not specifically known.

According to Smithsonian Magazine, many aquatic species and some land mammals lost their stomachs permanently and genetic mutations do not reverse.

On the opposite side of the coin, some animals have multiple stomachs, which begs the question, “Which ones?”

This is a loaded question as there are approximately 150 different species of animals with multiple stomachs worldwide.

The multiple stomachs are compartmentalized stomachs which means different sections of the stomach with different uses.

What Animal Has the Most Stomachs?

Animals having multiple stomachs are giraffes, steers and cows, yaks, sheep, deer, and many others. Plants are the main foods and therefore the stomachs break down the vegetation in stages using different bacteria in each portion of the stomach. These animals are referred to as ruminants. 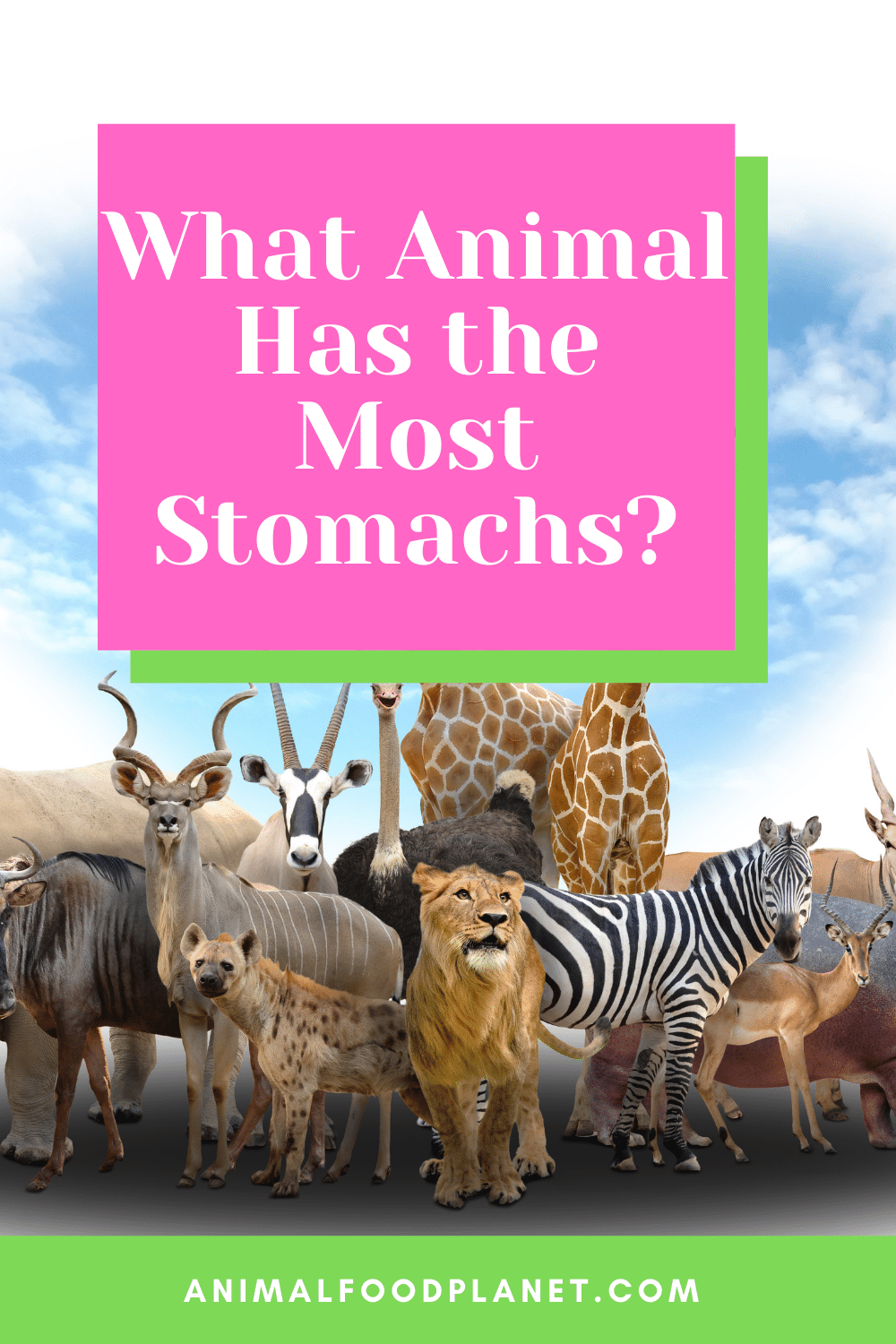 What Animal Has The Most Stomachs?

So, What Animal Has the Most Stomachs?

Answers from research vary with some unfounded research claiming that some animals such as alligators and other lower form animals have the most.

These stomachs are not possibly functional, however, much like a human appendix where it still is useful in preventing infection but not digesting food. 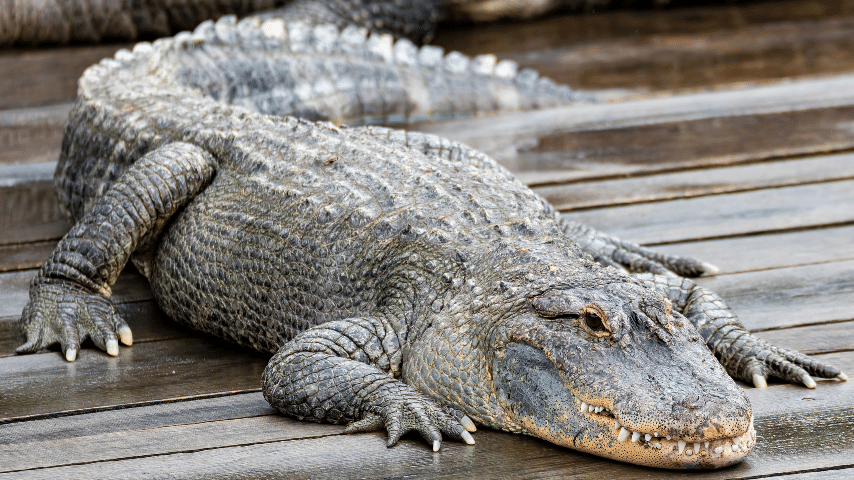 Alligators And Other Lower Form Animals Stomachs Are Not Possibly Functional

Many of our human ancestors were herbivorous (plant eaters only), so the appendix was the second stomach in humans millions of years ago.

However, the most reliable source (and which makes sense) using the “chambered section” stomach methodology described above,

would be, believe it or not, the cow and the goat. This is according to research done by verified scientists in animal biology.

Cows and goats produce milk and have four functioning chambers. This is according to Purdue University and as close to real study as can be believed.

The four sections of the stomach are called the Reticulum, the Rumen, the Obamasum, and the Omassum, all of which have a different roles in the body.

The Reticulum is especially important to cows and goats as chewing by cows and goats breaks down the food into cud before it is passed into the rest of the stomach.

(this is why when you spot a cow or goat it always seems to be chewing).

Other ruminant animals such as deer, giraffes, steers, and horses also seem to always be chewing

but the importance of the stomach in human consumption of milk in this article is as much as the number of stomachs an animal has. 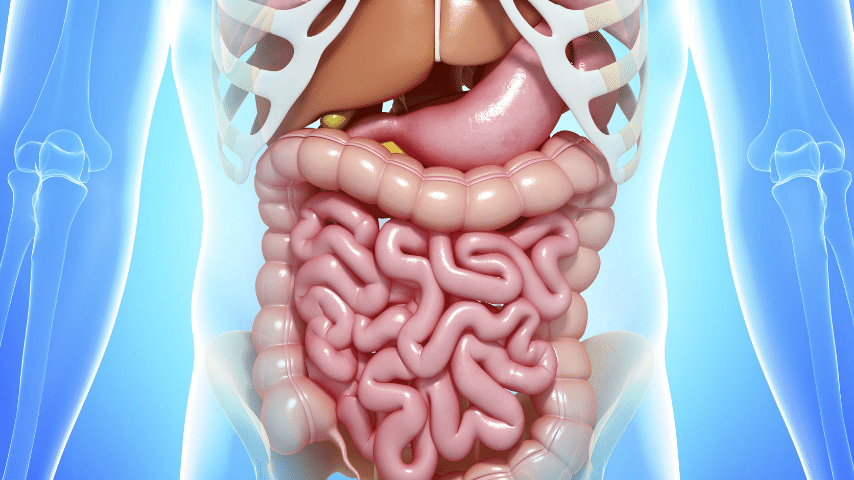 Cud is akin to chewing tobacco where juices are released only these are beneficial juices.

This might sound strange but is a relatively safe way for a cow or goat to produce milk that humans can safely consume.

While other ruminants like deer and other mammals have four stomachs, and milk can be drawn from them for consumption,

it is not popular in most countries and the milking of reindeer can be dangerous, although it is done in Scandinavia. Some Bedouin tribes milk camels. 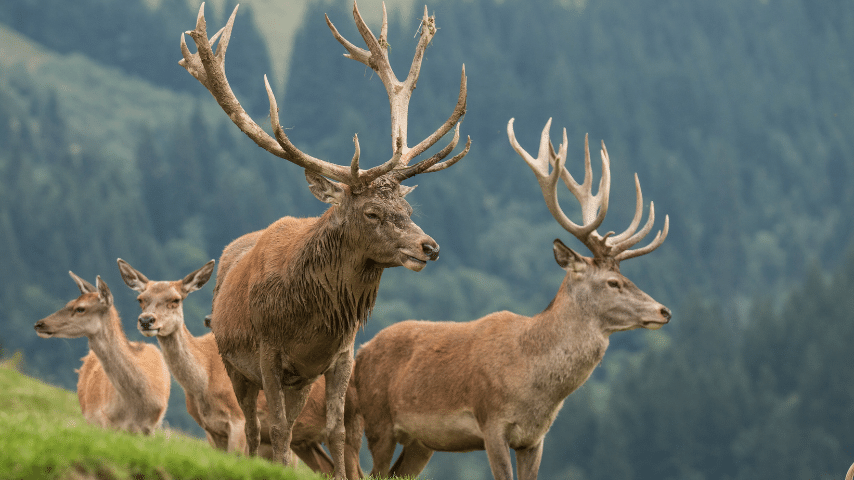 Deer And Other Mammals Have Four Stomachs, And Milk Can Be Drawn From Them For Consumption

Most other milk is not fit for human consumption and even cows and goats can lose the ability to be milked if dehydration occurs.

However, cows and goats cannot live without the four stomachs as the bacteria level becomes high and they die.

Ruminant animals, which eat only plants and are herbivores must grind down the food and pass it from one part of the stomach into the other to prevent bacteria from harming them.

Cows and goats can die without the four stomach portions. In addition, cows’ and goats’ stomachs are generally checked for diseases by agricultural veterinarians as diseases can occur.

Milk cows and goats are the most common supply of milk in the USA and other developed countries for consumption.

The dairy industry is regulated for cows and goats and farmers ensure their animals’ stomachs are in good health by feeding approved grains in addition to the grazing the animals do naturally.

Milk is also pasteurized and homogenized before being sold to remove bacteria and excess fats and water.

In industrialized nations, however, generally, only cow and goat milk and health are regulated by OSHA (Occupational Health and Safety Administration) in the USA.

Animals who only eat plants need to extract the water from the plants through constant chewing.

The cud that is chewed is then passed to the first stomach which extracts the water and then to the second, the third, and finally the fourth.

This ensures all bacteria are removed and more water retention occurs.

Cows and goats in particular because they are milked regularly can lose a lot of water in the process of reproducing the milk.

They do drink water continuously but the plants eaten by them must also contribute to the total water consumption. 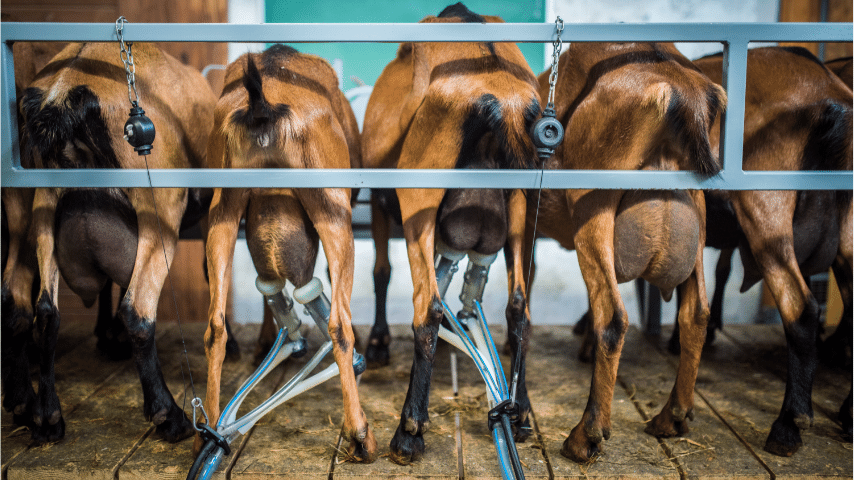 Frequently Asked Questions About What Animal Has the Most Stomachs

Do all animals who eat only plants have many stomachs?

No. As explained in the first portion of the article many mollusks, fish, and platypus can have no stomachs at all due to evolution.

These are uncommon rather base type animals however and have glands to make up for the lack of a stomach.

Can I tell by looking at a cow or goat that they have many stomachs?

No this does not show on the outside but diagrams online can be found which show the four stomachs, or “chambers” as they are called.

A large portion of the animal is the stomach however if you look closely and this can give a hint. Big round bellies can be observed!

Wild animals have many stomachs but are not milked so why do they?

Wild animals still need good digestion and the removal of bacteria via the four stomachs.

Water might be scarce for them so digesting more fibrous materials needs to be broken down even more when in the wild.

The Conclusion What Animal Has the Most Stomachs

The stomachs are really “chambers” with four different functions to ensure health in herbivorous animals.

Some animals have no stomachs due to evolution yet survive while those with many stomachs need all the stomachs or can die.

but physical coping mechanisms help ensure that both wild and domestic animals survive using multiple stomachs or none at all.

Over 150 species of animals exist with multiple stomachs, and this article is only a guide to the most common in the USA

and other countries both industrialized and non-industrialized. Included was a brief overview of wild animals with many or NO stomachs.