What are the warning signs when introducing cats?

Since cats are territorial by nature, you may run into some problems when bringing home a new kitty.

However, there are warning signs that you can look out for when introducing your cat to a new cat that’s just been brought into your home.

It’s perfectly normal for your current cat to become defensive and view the new cat as a threat.

Fortunately, the aggressiveness will usually subside once the cats get to know each other.

In the meantime, be on the lookout for warning signs of an impending feline fight on your hands.

When introducing cats, you should watch out for any hissing, growling, fur puffing, snarling, ear flattening, or staring each other down. These are telltale signs that your current cat views the newly-brought-home cat as being a threat to their territory. 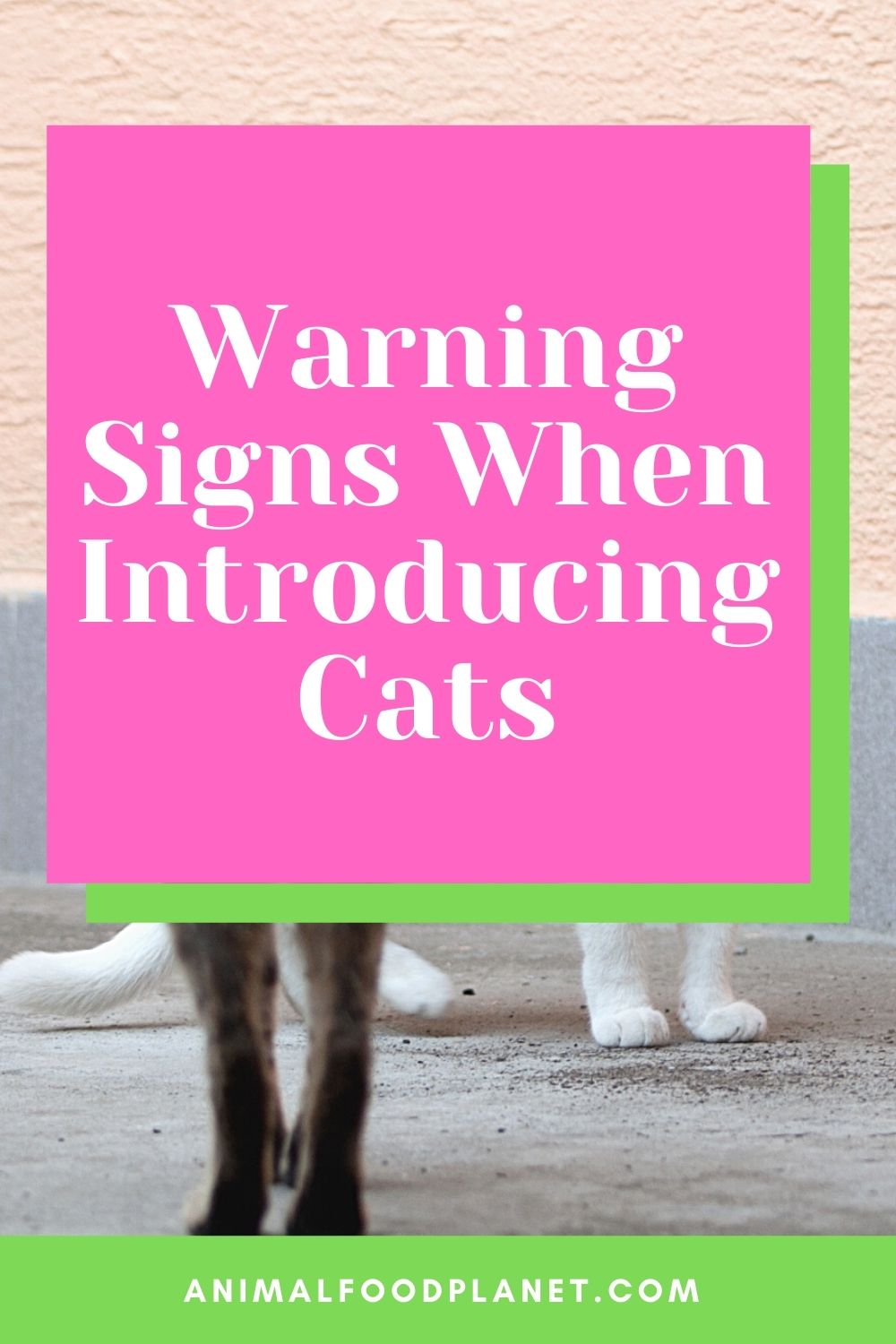 Eventually, this may lead to the cats hiding from one another, fighting, and refusing to eat and use the litterbox.

While it’s normal for cats to not greet newcomers with the warmest welcome, territorial catfights can be life-threatening. 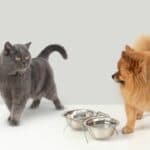 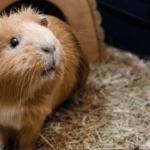 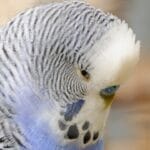 Fortunately, you can take these steps to help your cats learn to co-exist with one another.

Red Flags to Look Out for When Introducing Cats

The biggest red flags when introducing cats are hissing, growling, snarling, puffing up fur (including arching their backs), and flattening of the ears, but you should be particularly concerned if your cats are displaying a combination of these behaviors. 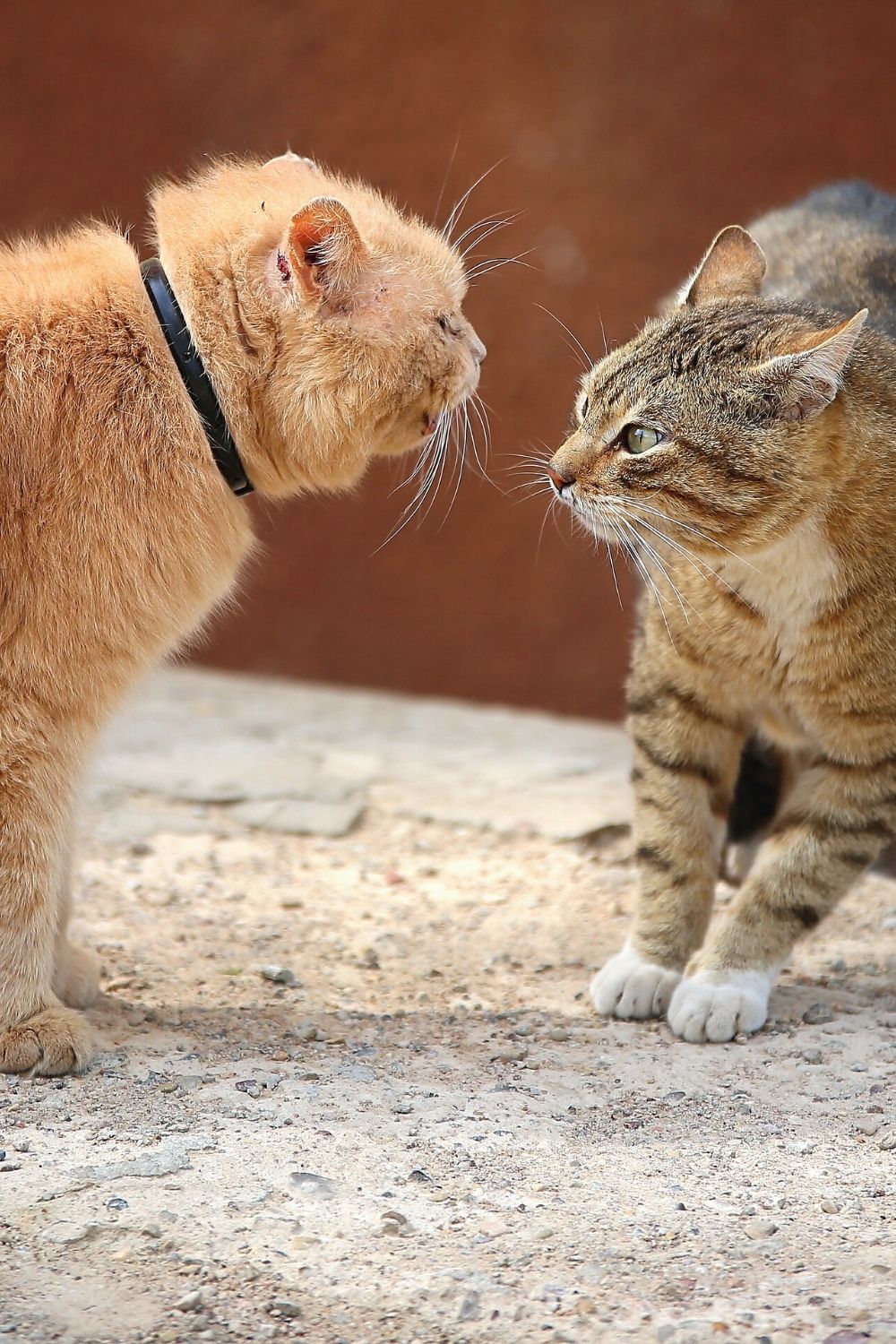 Hissing, growling, and puffing up fur are some of the warning signs when introducing cats

While cats will occasionally hiss when excited, hissing is usually a sign of fear, which is perfectly normal if your cat feels threatened by a newcomer. 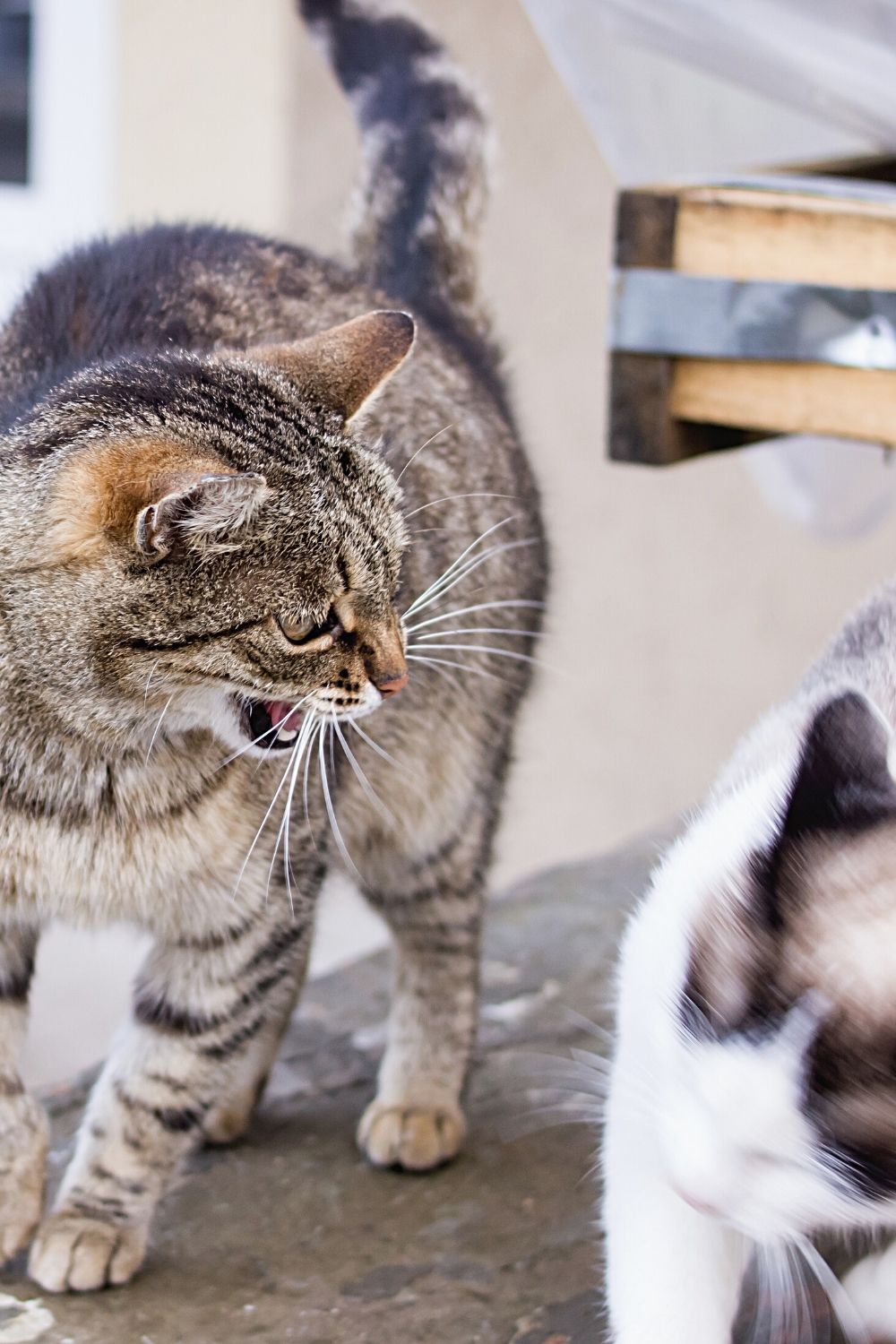 Although these aren’t necessarily warning signs of aggression, they clearly show that your cat is feeling uncomfortable.

If your cat begins to growl or produce a rumbling sound, they are essentially telling the other cat to leave their territory. Since the new cat now lives there, it’s doubtful that the warning will be heeded.

Then, your current may puff up their fur to make themselves look bigger and assert their dominance, or the cats may simply stare each other down as a precursor to an almost inevitable fight. 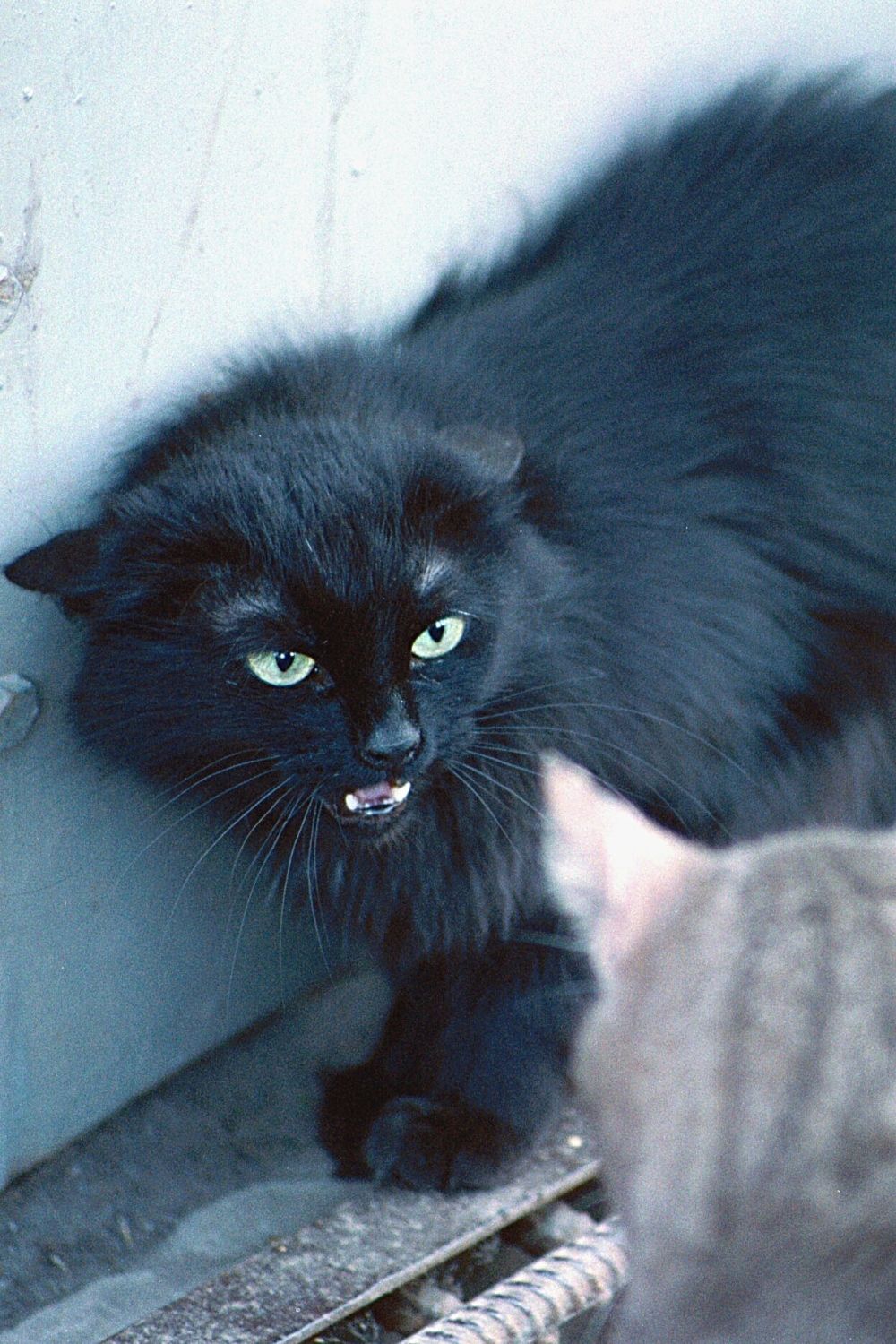 Cats puff up their fur to make themselves appear bigger, especially when introduced to a new cat

If you notice these warning signs, the cats should be placed in separate rooms and allowed limited – and supervised – time together, so they can gradually get to know one another.

Cats Can Fail to Thrive from the Stress of a Newcomer

Occasionally, cats may refuse to eat if fed in the same room as the newcomer. While this may simply be a form of rebellion, your cat may legitimately feel uncomfortable or threatened by the new cat.

Your cat may even take this a step further and refuse to use the same litterbox as the new cat. This can affect your cat’s ability to thrive.

The newcomer – or less dominant cat – may start hiding underneath the bed or sofa to avoid altercations with the other cat. 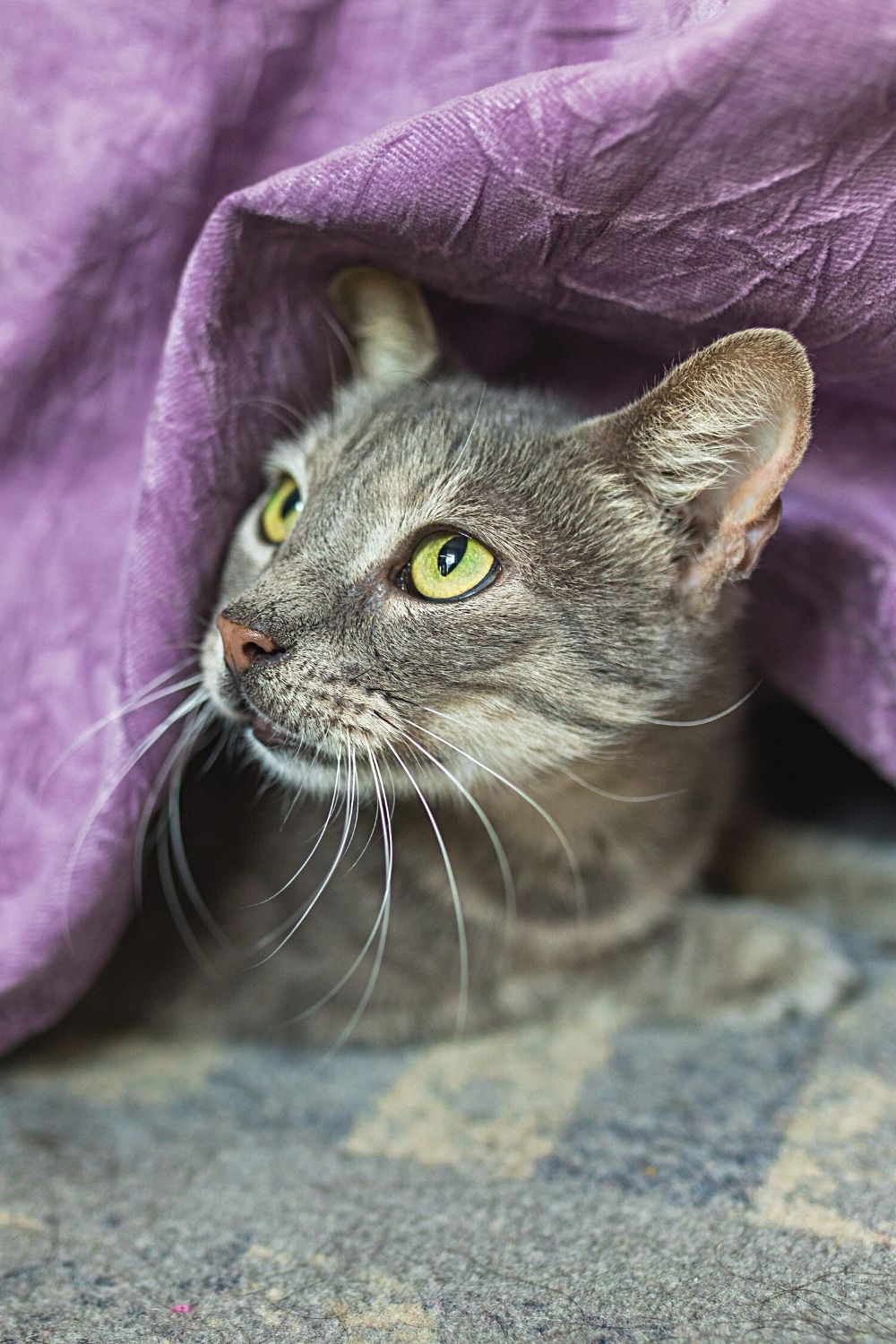 Eventually, the two cats may finally decide to have it out and begin biting or attacking each other. If this happens, separate the cats for 24-48 h0urs.

Normal Behaviors When Cats are Introduced

Since cats are extremely territorial and content with solitude, it’s normal for a cat to not greet a newcomer with a warm welcome.

Even a little bit of hissing is normal when cats are first introduced.

Although hissing can be a sign of aggression, fear, or dominance, it’s perfectly normal for a cat to be on the defensive when a new cat is brought into the home.

While you were probably hoping for a loving cat eutopia where the two cats would rub and cuddle one another, there’s no guarantee that will ever happen.

But it can and will eventually happen. You just need to give your felines enough time.

How to Properly Introduce Cats

Although you can’t control whether your cat is thrilled about the idea of a newcomer, you can make the transition easier by avoiding an aggressive response during introductions.

Ideally, the new cat should be placed in a separate room with its own food bowl, cat bed, and litter box.

Then, you should gradually introduce the two cats and give them time to get used to each other’s sounds and scents.

No, your cat may still not be very happy with the idea of a new cat in the home, but they’ll eventually come to accept the newcomer — in their own time.

If you are lucky, you may eventually end up with that loving cat eutopia that you were hoping for.

How long should I separate my cats for after a fight?

After a catfight, the cats should be kept in separate rooms indoors for 24 to 48 hours to give both cats time to calm down.

How do I get my cats to stop being aggressive towards one another?

Spaying and neutering reduce territorial behavior that often leads to fights. Additionally, providing extra hiding nook and plenty of food and supplies may prevent cats from fighting over resources and offer them places to enjoy some time alone.

Can cats become friends after fighting?

It’s certainly possible for cats to become friends after fighting, but don’t count on it. Cats will often fight when they’ve been abruptly introduced, so it’s best to go easy with the introductions and allow the cats limited contact with one another until you see how they’ll react.

Although it’s normal for cats to be wary of newcomers and even hiss at them, there are certain warning signs that cat owners should look out for when introducing new cats.

While aggression between cats is common, it shouldn’t be overlooked, especially when introducing a new cat into your home.

Even if the cats initially have trouble adjusting to one another, this can change over time. It really all depends on the cat.

The hard truth is that you can’t force your current cat to like or even accept the newcomer, but there are measures that you can take to help your cats adjust — and keep them safe — during the introductions.