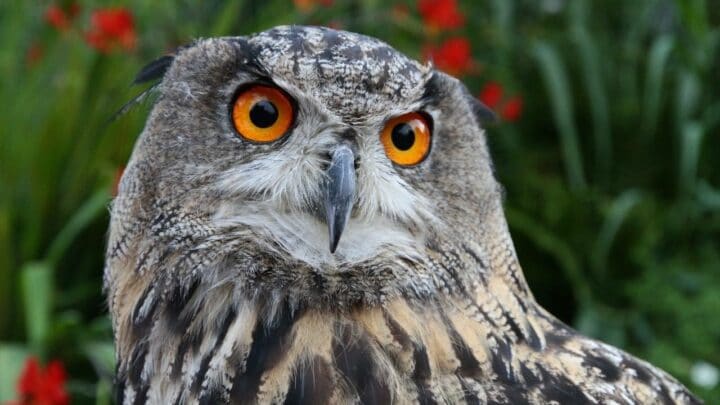 The traditional view of owls is that they are wise, intelligent, and kindly. That’s the owl of fables because the owl in the wild can be vicious and deadly.

The owl is the nighttime version of daylight predators, such as the eagle, hawk, and kite, Plying the night sky. They will take babies from the nest and take on all comers who find their way into their night-filled territory.

The largest of the owl family is the Great Horned owl. Owls of this family average a little over two feet in height, weigh three to four pounds, and have wings that stretch an impressive four to five feet wide.

To learn why do owls attack eagles, read on for more about these two predatory birds.

Why Do Owls Attack Eagles?

Owls and Eagles are Competitors for Territory

Owls and eagles often live in the same territory, and since they have similar diets, they are vying for the same groceries. Even though owls are creatures of the night and eagles of the day, they often cross paths.

Eagles will hunt into the late hours of the day when owls begin their hunt. But, on the contrary, owls are often still out hunting when eagles arise in the mornings and start their days in the early hours of dawn.

It’s at these hours that owls and eagles can cross paths, and then it’s on.

Even though the great horned owl has a weight half that of a bald eagle, they have talons with a grip that can crush bone. With a clasp that can produce 500 pounds per square inch of grasping power, it can be deadly when an owl gets a grip on a foe.

This phenomenal strength, mated with its fierce fighting attitude, gives it an edge against its competitors and enemies. Although owls do not always win a battle against a larger foe, they often do, even smaller than the eagle.

Owls and Eagles have Similar Diets

Both of these avian predators are carnivores. Their diets consist of rabbits, voles, rats, squirrels, chipmunks, ducks, other owls, reptiles, and insects.

Eagles prefer fish but vie with owls and other predators for small game as a meal.

Even if food may be ample in the area shared by the Great horned owl and the bald eagle, the owl will still see the eagle as competition for great food. Therefore, it will try to kill the adults and attack the nests and steal the eaglets.

Their talons have enough strength to break the backs of their opponents. Pair that power with stealth, and you can see that an owl is a well-equipped fighter.

The great horned owl will take on a full-grown bald eagle but is the only member of the owl family that has the ferocity to do so.

However, more diminutive members of the owl family, such as the Eagle-owl, will steal baby hawks and other birds from their nests.

They will also battle with other predatory birds, such as the hawk, that they see as a threat to their territory.

Owls that Live Near You

There are almost 40 species of owls in North America. Whether you live on the east or west coast, the Midwest, or the southern plains, one or two of these species are likely to live near you.

Not every owl is as big as the Great Horned owl. The smallest North American owl species is the Elf owl.

Standing less than six inches in height, the Elf owl weighs about an ounce and a half when fully grown.

The owl family has screechy members, bespectacled ones, horned ones, and those that live in the forests. There are also little and pygmy owls, which are the smallest of the family.

However, there are also crested owls, and the strangest of them all, the burrowing owl.

You won’t often see an owl during the day, but near nightfall, after dark, and in the early hours of the morning, you may be able to spot an owl.

You may also hear them outside your home, as they call who, who, for their mate.

The Golden Eagle, another native of North America, will hunt down great horned owls and kill them. They see them as a direct threat to their food source as they are both enormous birds with voracious appetites and dietary needs.

There may appear to be an abundance of food for all forest animals in the wild; however, urbanization, drought, and fires can make animal habitats smaller.

If you are out at the right time at night, you may see a great barn owl as it wings across the night sky. However, you may never see an owl attack an eagle, but now you know that it does happen, and sometimes the owl wins. 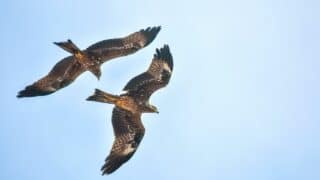 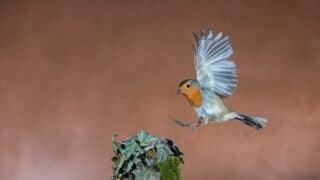 […] photos making the rounds on the various social media platforms that show how “short” owl legs really are. Most people were freaked […]

[…] one of the largest avian predators in the world, eagles have few predators. Eagles are known to fight amongst themselves and die from their […]