These white splotches on either side of the head, called eye patches or eyespots, are just normal coloration.

The whale’s real eyes are found in the lower-left corner of the eye patches and above the corner of the mouth, small in comparison to the entirety of the whale.

Eye patches differ with some types of orcas.

Where Are a Killer Whales Eyes Located?

Orcas or killer whales have large, oval spots on the sides of their heads that seem to look like eyes. These spots are located behind and above the actual eyes. The real eyes are brown, blue, or red. The eyes are the size of a cow’s eyes. Just why orcas evolved such large white eyespots is unknown, although theories abound.

The Eyes Have It

Orcas seem to be eternally glaring at the world with a vivid white gaze. These aren’t all-white eyes, but white patches of color on their skin.

Just why orcas evolved such remarkable false eyes is unknown. There are 2 main theories on how these eyespots benefit killer whales.

The first theory is that the false eyes draw the attention of large sharks that could attack the whale. The shark bites the false eyes instead of the real ones. 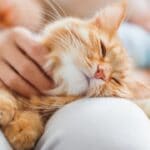 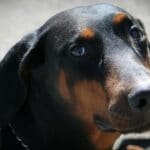 Although there are very few sharks large enough to take on an adult killer whale, killer whales have been around for at least ten million years.

Back then, the sea was full of large predators that could easily kill an orca, such as the megalodon, the largest shark that ever lived. They grew three times larger than a great white shark.

Another theory is that an orca’s white patches, including the eyespots, help whales identify individual whales.

Human groups that study killer whales, like the Center for Whale Research, note that the saddle patch, or white or light grey patches behind the dorsal fin, differs for each whale. This helps scientists identify particular whales.

Since the eye patches usually do not rise above the water, they are difficult to photograph, so saddle patches are used, instead. The differences between eyespots in individual whales have not been studied.

Although killer whales are thought to have very good eyesight, they do not rely on their sight the way people do. Whales live and swim mainly in the dark.

Ocean water is incredibly murky. Light only penetrates 3,280 feet or 1,000 meters in the water.

A tagged killer whale was recorded diving to 3,566 feet, according to a 2019 article in ICES: Journal of Marine Sciences, suggesting these whales normally travel in total darkness.

To get around, orcas use echolocation. Unlike light waves, sound waves travel very well through water.

Sound waves are 5x faster in water than in air. Sound can also travel longer underwater.

Whales are thought to hear the calls of other whales even from miles away.

Orcas use a kind of sonar called echolocation. It works like this:

This isn’t a fool-proof system. Humans make a lot of noise in the ocean, such as boat engines, underwater drilling, and military exercises.

This noise pollution messes up a whale’s echolocation abilities, effectively making the whale blind. It’s thought of as the cause behind beachings in all species of whales.

Eyespots and Types of Killer Whales

Before, it was thought there was only one killer whale species. Now there are thought to be many more, although they have not been officially been designated separate species.

Right now, they are just called different types. The types are not thought to interbreed.

Genetic testing of killer whales living around Antarctica has shown that one type of orca, called Type A, branched off from other types about 150,000 years ago.

The different types of Antarctic orcas often have differently shaped or sized eyespots. These help scientists identify which type of orca they are studying.

There is thought to be a fourth type, Type D, with the smallest eyespots of all. However, Type D whales have so rarely been spotted that not much is known about them.

Genetic samples were only first taken in 2019. Whether Type Ds are a new species of killer whale has yet to be determined.

Frequently Asked Questions About Where Are a Killer Whales Eyes Located

Do All Killer Whales Have Eyespots?

Although the vast majority of killer whales are black and white, there has been an all-white whale observed in Alaskan waters in 2020. She did have eyespots whiter than her body. Only ten all-white killer whales have been spotted in recorded history.

All whales, including killer whales, are thought to be color blind since they lack the cones and receptors that other animals with color vision have. It’s thought that whales see the world in shades of grey.

What Color Are Killer Whale Eyes?

The irises in orca eyes can be blue or brown. The white part of the eye can turn a bloodshot red when they are emotionally upset. Captive orcas have been known to have red eyes when they die.

Killer whale eyes are only about the size of a cow’s eye. They are dwarfed by the huge eyespot or false eye above and behind the real eyes.

Eyespots also called eye patches, may have evolved to help whales identify each other, or to protect their real eyes from the attacks of sharks.

The size and shape of eyespots differ depending on what type of orca it is.