We find animals of all proportions in the natural world, ranging from microscopically tiny to unimaginably large. Some are feathered, and some are scaled.

Some have big ears, long necks, or huge teeth. With so much to learn about the animal kingdom, I’ve become increasingly interested in the so-called “record-holding” animals.

In this post, we’ll take an in-depth look at the creature with the largest eyes.

What animal has the largest eyes?

The colossal squid (Mesonychoteuthis hamiltoni) possesses the biggest eyes of any known animal ever to be recorded. This deep-sea dweller’s eyeballs measure in at a record-breaking 11 inches (27 centimeters), which equates to the size of a soccer ball.

Why Colossal Squid’s Eyes are So Big

It is believed that the reason for a colossal squid’s giant eyes is to aid in their survival, particularly given the depths and darkness of the area they inhabit.

The size of their eyes is also related to their overall size. The biological consequence of animals that dwell in the deep sea is a phenomenon known as deep-sea giantism.

In simple terms, the deeper the ocean’s depths, the larger the creature is likely to become.

From a survival standpoint, their forward-facing eyes allow them to judge distance accurately, and in spaces where there is little to no light, they can spot large predators, like sperm whales, approaching from a distance. 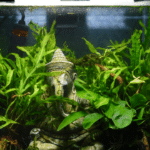 Sperm whales, as gigantic as they are, can be sneaky attackers. Fortunately for the colossal squid, whales tend to trigger bioluminescence when they move, as a result of knocking into microscopic plankton.

This creates a halo of light around them, which the large eye of the colossal squid can identify, serving as an early warning sign of impending danger.

The eye of a colossal squid comprises a single lens, much like a camera. This focuses images onto its retina and sends information to its brain via its sophisticated optic lobe.

In addition to this, a colossal squid’s eyes contain light organs, which work a bit like headlights. These giant built-in torches help them spot prey even in the darkness.

However, much like most deep-sea animals, colossal squids cannot see color.

What a Colossal Squid is

The colossal squid is a giant marine animal that inhabits the deepest parts of the Southern Ocean around Antarctica.

Mature colossal squids can reach lengths of 46 feet (14 meters) from head to tentacle and weigh in at a whopping 1100 pounds (500 kilograms).

These squids are also the largest known invertebrates on earth.

With that being said, it has proven challenging to study colossal squids as their habitat is beyond the reach of humans.

Most of what is known about them derives from rare occasions in which deep-sea fishing trawlers have caught them or from studying the stomach contents of their most significant threat, the sperm whale.

Classified as predators, they feed on both large and small fish and sometimes even eat other squids.

In terms of their physiology, colossal squids have giant heads, two fins, and long tentacles covered with suckers and sharp, strong hooks that they use to hunt and defend themselves.

Scientists have noted evidence of their fighting abilities on the bellies and backs of sperm whales.

This species is distinct from the giant squid (Architeuthis dux), which is smaller but sports longer tentacles.

What Else Do We Know about the Colossal Squid

Little is known about this mysterious sea-dweller beyond a few notable scientific studies that have taken place over the last one hundred years.

The first evidence that this giant animal exists was noted in 1924 when two enormous squid arms were discovered in the belly of a sperm whale.

In 1981, a Russian trawler accidentally caught a 13-foot (4-meter) squid that was later identified as a juvenile colossal.

Most recently, in 2007, a live female specimen was captured off the coast of New Zealand. In already-failing health, the squid was taken on board for scientific study.

Measuring and dissection showed that she weighed a whopping 495 kilograms and measured in at 32 feet (10 meters).

Interestingly, her beak was much smaller than those commonly found in the stomachs of sperm whales, indicating that this species probably grows to be much larger than we think.

Frequently Asked Questions about What Animal Has The Largest Eyes

Which animal has the second-largest eyes?

The blue whale, which is significantly larger and heavier than the colossal squid, has the second-largest eyes of all animals, and they are approximately 4 inches (11 centimeters) in diameter.

Which land animal has the largest eyes?

The land-dweller with the largest eyes is the ostrich. At 2 inches across (5 centimeters), the ostrich’s eye is larger than the bird’s brain.

While these animals are not endangered, they are considered rare. This is due to their limited interaction with humans and their habitat. That being said, they are not targeted by humans for catchment, and their environment is out of our ambit, so it’s impossible to know how many there really might be.

Colossal squids are one of nature’s enigmas, and indeed, if it wasn’t for happenstance findings of them, we may have gone on for decades more, never knowing about this creature at all.

While they already hold the record for having the largest eyes and being the world’s largest invertebrates, there is plenty more that we don’t know about them yet, and maybe never will.