Have you noticed your dog constantly rubbing its face after eating a sumptuous meal?

Some fur parents think this is merely a force of habit, but there’s so much more than meets the eye.

If you’re curious about this peculiar habit of theirs, it’s about time you dive deeper into the reasons behind it.

Why does my dog rub his face after eating?

A dog rubbing its face after a meal can have 7 reasons – from wiping its face clean, to show happiness, to relieve itself from discomfort, a tight collar, a parasite infestation, a brain tumor, or for pleasure. 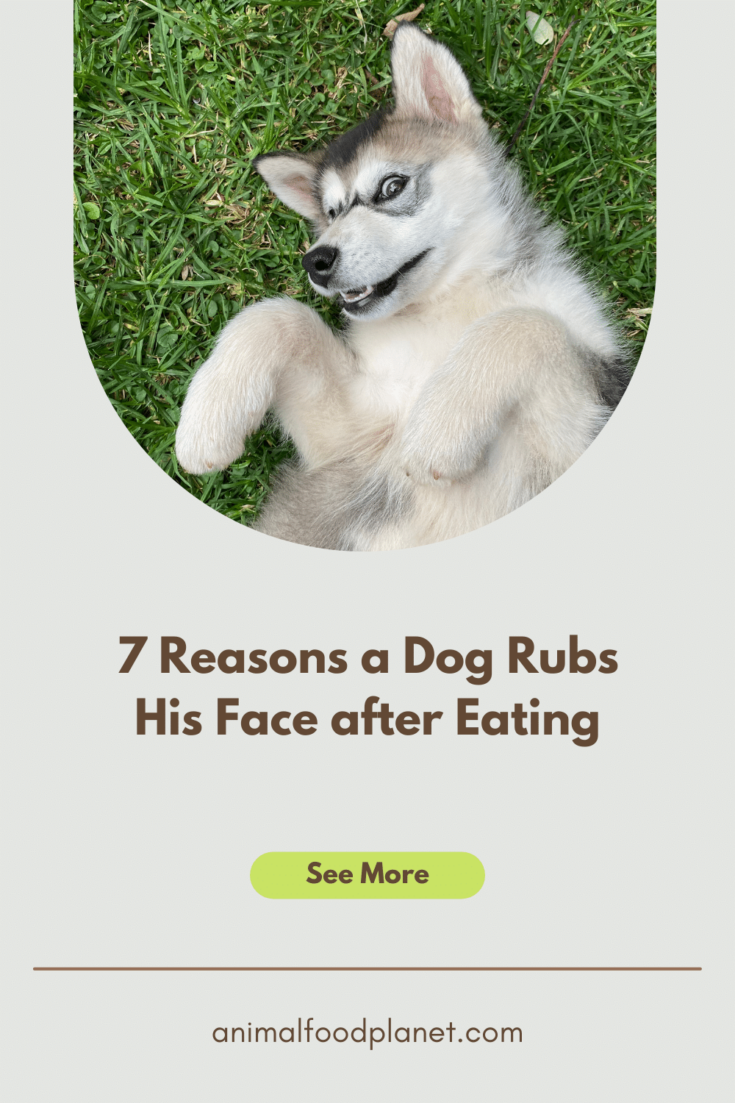 Reasons a Dog Rubs His Face after Eating

7 Reasons Why Your Dog Rubs his Dace After Eating

Reason 1: A Dog Cleaning its Face 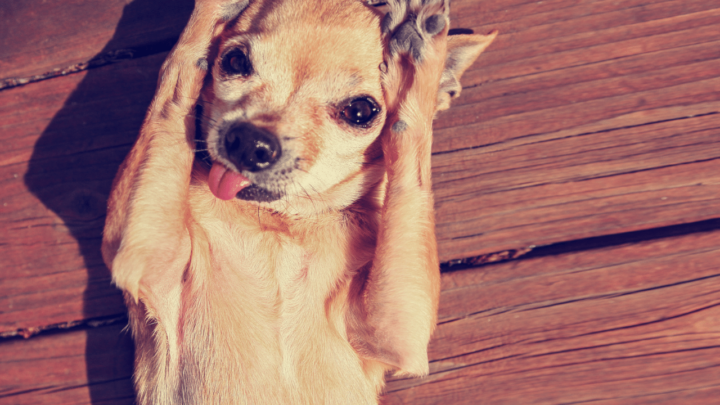 Reasons a Dog Rubs His Face after Eating – Cleaning its face

After munching on a delectable meal, it’s bound for some food particles to stray their way across a mutt’s face.

While other dogs don’t seem bothered with having food on their muzzles, some feel squeamish about it.

Other pups can even combine face rubbing with paw licking as well. These two are the most common grooming behaviors dogs perform to clean themselves.

If you notice this behavior often after giving your mutt a meal, then try washing its muzzle with a washcloth. This way, you can bond with your doggo while keeping him clean.

Reason 2: Expression of satisfaction and delight 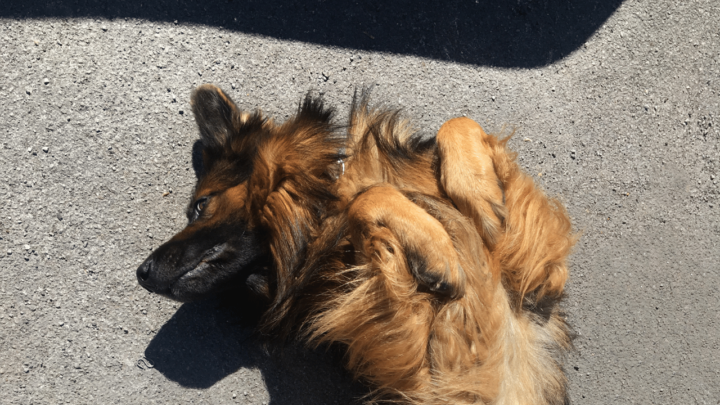 A pup rubs its face to show it is happy

While a wagging tail commonly shows a pup’s delight, face-rubbing is also another way to show it.

Most dog behavior experts coin face-rubbing with other gestures as contentment ceremony movements.

Contentment ceremony is a collection of signals that pups do to show you how much they loved the meal.

Even as you’re prepping the pup’s food, a dog can start rubbing its nose against the floor, then proceed with rolling and rubbing its snout.

Or, your mutt can even combine those gestures by rubbing its face from eye to nose, but it usually comes at the end.

But, mind you, these behaviors aren’t exclusive to how dogs say their graces after eating a delicious meal.

So, it’s still best to check for other noteworthy gestures before concluding. 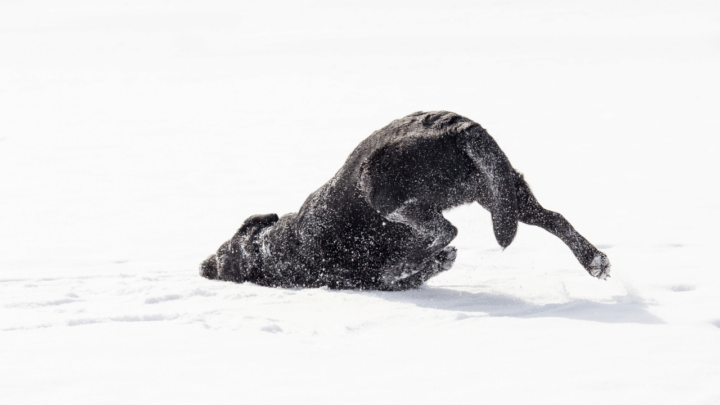 Most doubting fur parents think that dogs show their discomfort through groaning or whining.

But, face-rubbing after a delicious meal can spell discomfort or even a medical emergency at worst.

As mentioned earlier, a dog can rub its face after a meal to signal satiety.

But, if you notice that your mutt’s performing such gesture along with signs of irritation, then that’s another case.

Signs of irritation include swelling, watery eyes, and sores on the gums. You can even notice some flinching if you touch its snout.

Once you notice any of these signs, it’s best to speak straight away with your veterinarian.

The last thing we want to have is a mutt gasping for breath due to an allergic reaction.

Another medical-related reason for canines to rub their faces after a meal is toothache.

The most common reasons for toothache are swollen gums and broken teeth as well as cavities and tartar buildup according to Wedgewood Pharmacy.

Since pups can’t directly state where the pain’s coming from, they’ll rub their snouts against an object for pain relief.

You might want to check on your mutt’s appetite if there are any changes. A dog presenting with an aching tooth prefers to eat less, or even develops a sudden fancy on soft food.

Other times, a pup will eat its usual food, but will only chew on one side. So, if you notice these signs with constant face rubbing, bring the pup to a vet for further evaluation.

What other reasons do dogs have for rubbing their faces?

Apart from the ones mentioned above, there are other things you might want to consider.

But, take note, you have to be keen on observing the subtlest details for you to rule them out. 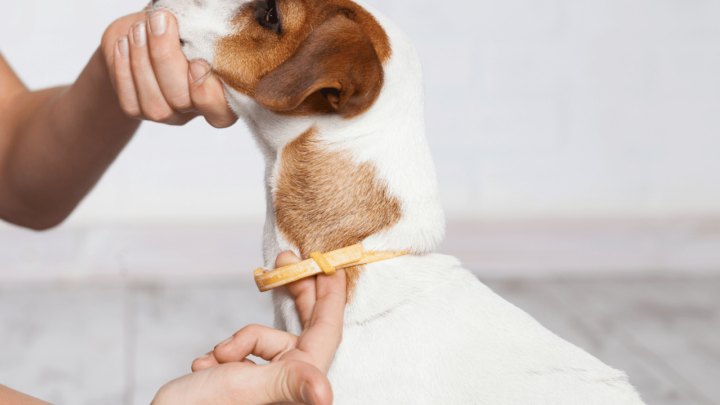 Ensure your dogs collar is not too tight

Collars are one of the most noticeable markings responsible fur parents place on their pups for identification.

But, while it’s a necessity, collars don’t come in a one-size-fits-all-dogs feature.

With a dogs’ voracious appetite, weight gain isn’t a surprise at all. Thus, if you haven’t bought a new collar and you notice your mutt constantly rubbing its face, check for its fit.

To check for the correct fit isn’t rocket science. Simply slip two fingers beneath your dog’s collar, and that’s it.

If you can easily insert two fingers under the collar, then it’s not tight. But, if you find yourself pushing to force the fingers into it, then it’s time to readjust the collar. 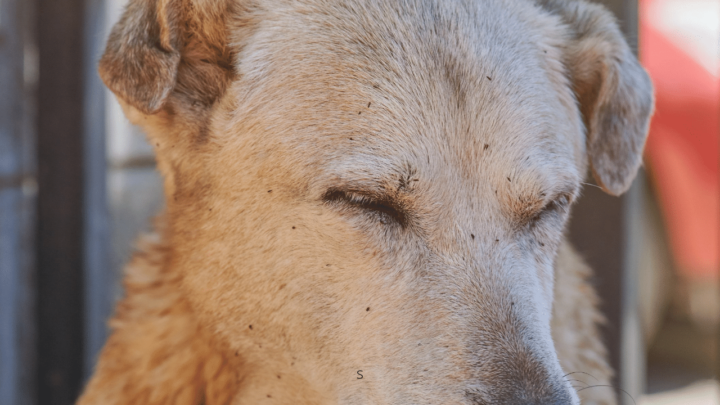 Another reason you might want to rule out your dog’s face-rubbing stint is the presence of parasites.

Ticks, fleas, or mites can’t resist roaming on your beloved canine’s body and having a taste of the warm liquid beneath.

Once these parasites sink their teeth into a dog’s body, their saliva reacts with the pup’s skin, ultimately causing itchiness.

At times, this area can be the face, hence, the doggo will keep rubbing its face to relieve itself of the irritation.

To relieve your mutt of itchiness, you can visit the vet to buy a prescription for treatment. You can also buy preventative medications to avoid dealing with these creatures again. 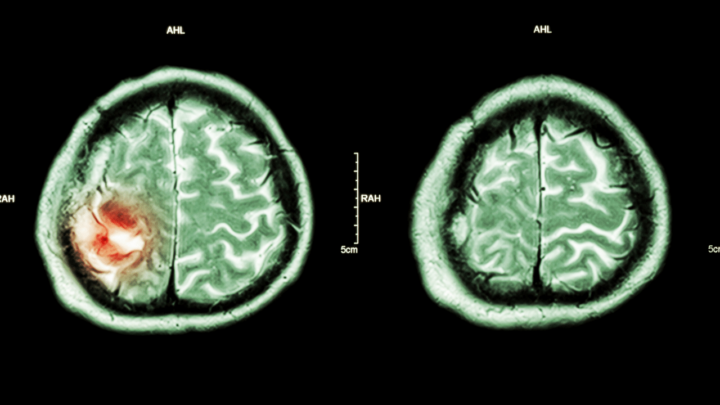 If worse comes to worst, a dog constantly rubbing its face can become a sign of brain tumor presence.

Though it isn’t common, most fur parents mistake this gesture as something funny.

Since tumors grow fast, they press on other structures inside the brain, causing discomfort, and even pain.

Thus, most pups with brain tumors press their faces against a wall or rub them to try alleviating their pain.

But, don’t think every face-rubbing is a sign of a brain tumor. If the gesture doesn’t come with seizures and other behavioral changes, then the tumor’s out of the question.

Brain tumors in dogs are severe but there are cancer treatments specifically developed for canines.

A recent study conducted by the Northwestern Medicine, Texas A&M University and ImmunoGenesis about treatment for glioblastoma in dogs has revealed that the treatment might even be viable in humans.

Glioblastoma is the second most common reason for brain cancer in dogs. 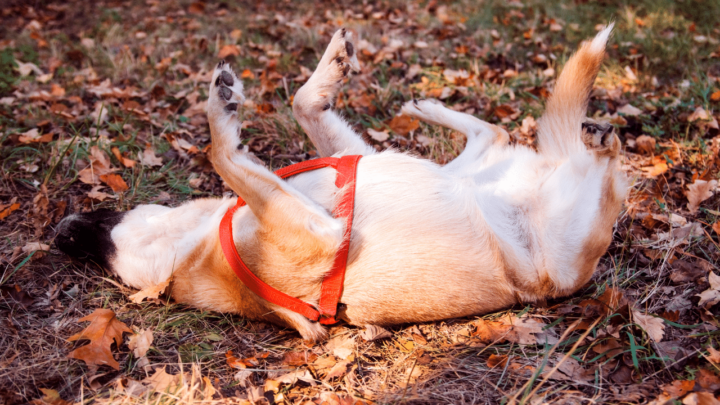 Pleasure – One of the main reasons a dog rubs its face

On the lighter side, face rubbing can simply mean they feel good when performing the act.

Once they touch on an object with a texture they like, they can’t stop rubbing their faces against it.

But, of course, you need to rule out other reasons first before you can jump to this conclusion.

Conclusion About Why does my dog rub his face after eating

So, the next time you notice your mutt rubbing its face after eating, don’t panic. But, if you already do, pay your vet a visit and ask your most pressing questions straight away.