Chances are that when you think about a sow bug, it will match the description of Armadilidium vulgare.

This species goes by many names, including the Common pill bug, Doodle bug, Potato bug, and the roly-poly.

Out of all the isopods, this is the most intensely studied terrestrial species.

Isopods are not insects but arthropods according to the University of Florida.

They are also quite a popular bug to keep in your home.

Kids will oftentimes find these out in the yard and want to take care of them.

They also make for great garbage disposals, ridding a terrarium of any organic matter placed in front of them.

But, what needs should be met in order to keep a thriving group of Roly-polies? This article will explore just that!

Armadillidium vulgare are easy to care for. Provide a 10 gallon plastic or glass container with a lid for 10-25 bugs and use leaf litter as food. They will need areas with high humidity as well as organic matter such as coconut fiber with a lot of hiding spots using logs, rocks, and leaf litter. The ideal temperature is between 70 and 80 degrees Fahrenheit (21 and 26 degrees Celsius). 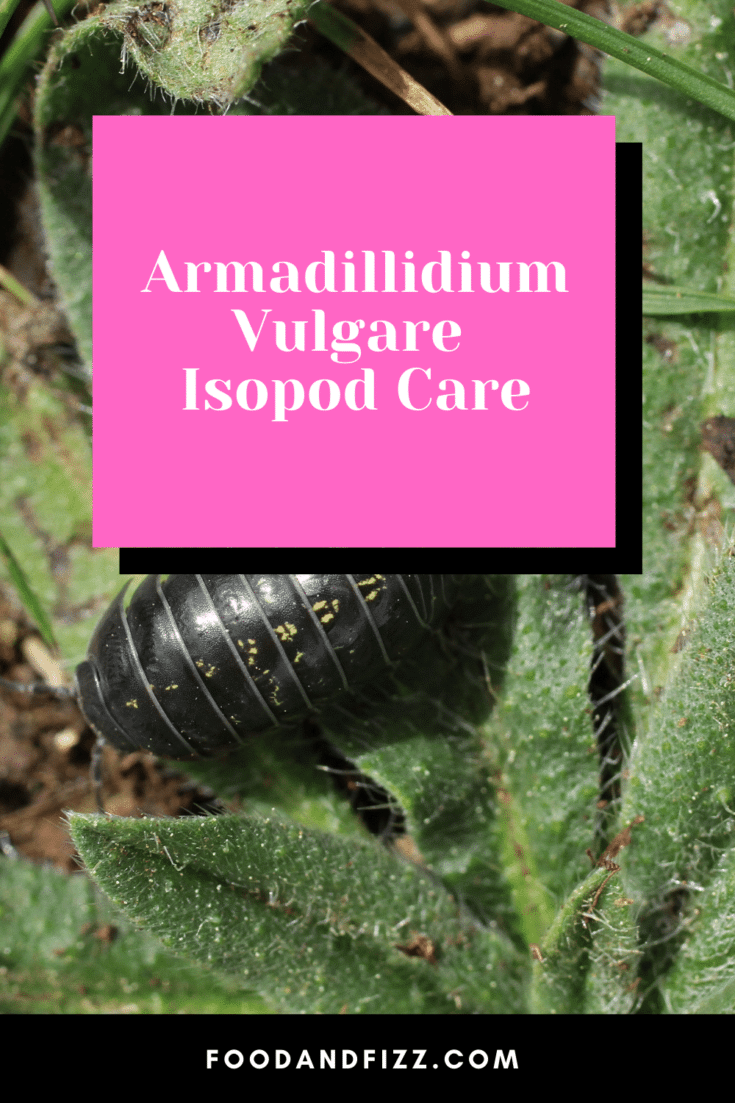 There are a number of aspects involved in caring for your own isopods.

They need moisture, food, temperature, and the proper enclosure, just to name a few.

We’ve taken the guesswork out of this so that you can be confident that your Roly-polies will live happy and healthy lives.

You can expect the average Armadilidium vulgare to be about 0.39 inches (10 millimeters ) in length.

The Common roly-poly can reach up to 0.71 inches  (18 millimeters in length, which is about).

They are given their unique name due to the ability to roll up into a little ball whenever they have been disturbed.

This is a great defense mechanism as it protects their underbelly.

This species of pill bug is known for being quite hardy despite its small size. 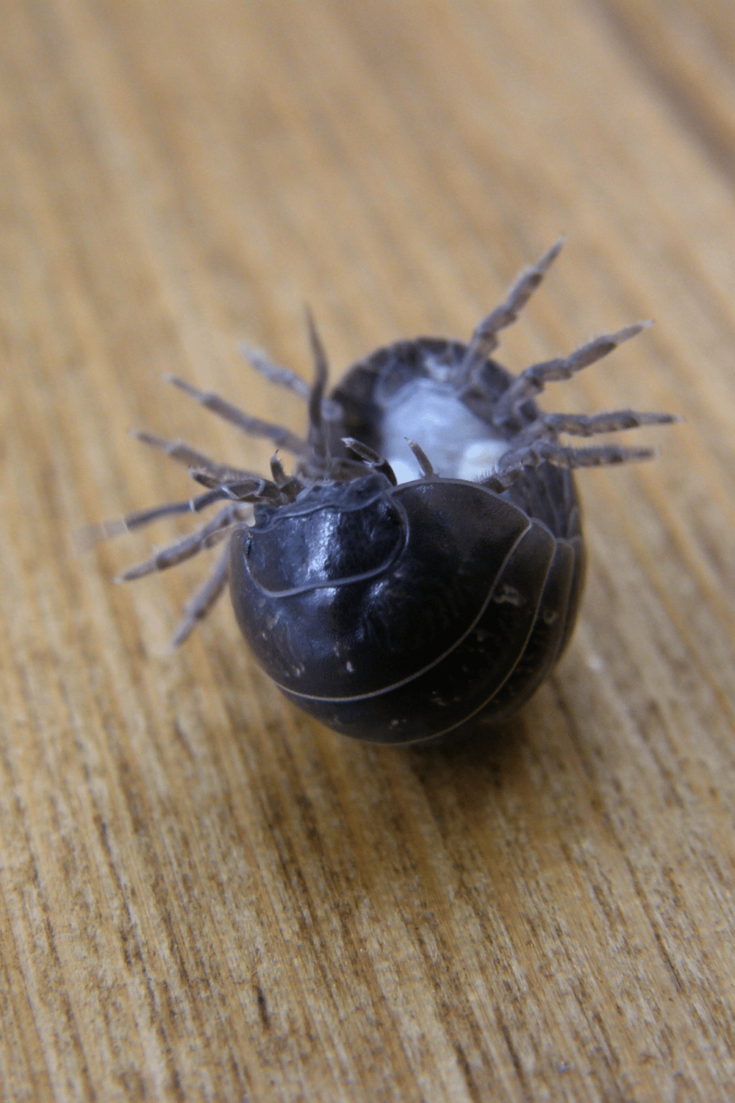 Armadillidium vulgare can roll up into a ball

Armadilidium vulgare, when supplied with enough food, can live anywhere from two to four years.

The lifespan of an insect is fairly short-lived.

On average, bugs tend to be seasonal creatures, meaning that they will only thrive for a year at the very most.

Even those individuals that last past a year are quite hardy and outlast a good majority of bugs.

But, as we said, diet can make a large difference when it comes to the longevity of a Roly-poly.

Unsure if you know the ins and outs of owning a colony of thriving Armadilidium vulgare?

Read through this article for an in-depth understanding of what care they need!

Armadilidium vulgare is relatively easy in their overall care.

They don’t tend to be as picky when it comes to basic needs being met.

In fact, there are a mere one or two aspects of care that should be considered in great length.

They can adapt to the rest fairly well.

The only time that they tend to be somewhat more difficult is if their environment were to change drastically.

To care for an Armadilidium vulgare enclosure refer to the following sizes per bug:

While out on a walk with the kids, you may come across a few Roly-polies in the dirt.

If you bring these insects home, where is the best place to put them?

It’s possible to place a small number of Armadilidium vulgare individuals in a cardboard box, but keep in mind that this enclosure will break down fairly easily.

The best option would be a vivarium or terrarium that is made out of plastic or glass.

There are containers built specifically for the roly-poly, most of which are pre-equipped with substrate and food.

An important aspect to having the correct enclosure for sowbugs is to make sure that it isn’t too crowded.

Follow the following rubric to make sure that there is enough space!

As with most animals, it’s best to provide a lid. Roly-polies aren’t avid climbers, but it’s still best to equip any container or enclosure with a lid.

Insects, in general, are generally incapable of scaling the side of glass unless it has been damaged or severely scratched.

The leaves, stigs, and other additions placed inside can act as a climbing structure.

A lid will also help to keep moisture within the tank, which we will discuss later on in the article.

Armadilidium vulgare prefers a substrate high in organic matter such as coconut fiber with a lot of hiding spots using logs, rocks, and leaf litter.

You can follow the same rubric for most terrarium-inhabiting isopods.

The University of Michigan states that Armadilidium vulgare are soil as well as ground dwellers.

When considering the best substrate to add to your enclosure, you’ll want to attempt to match the natural biome that individuals would have in the wild.

Although this sow bug can be found nearly all over the world, they are originally native to areas around Europe, particularly in the Mediterranean Basin, and the coastal regions of northern England.

Taking their distribution into consideration, you may also be inclined to know that those environments have plenty of fallen logs, rocks, and leaf litter.

They tend to also be fairly dark, which is what a roly-poly prefers.

In a general sense, your enclosure should have lots of organic matter that can add lots of hiding spots.

Another aspect to keep in mind is that Armadilidium vulgare, as with sow bugs, have gills so they should also have a fairly humid environment.

We will talk about this later on!

As for the specific items that you should place in your Roly-poly enclosure, there should be plenty of soil on the bottom of the tank, enough to cover the floor.

Some people have used newspapers, but this isn’t as natural.

You should also implement lots of hiding spots in the form of bark, smooth-edged rocks, cut-up cardboard, and paper.

We suggest that you add about 0.5 inches (1.3 centimeters-deep worth of soil) that is mixed with plenty of coconut fiber.

This will help to retain moisture in the tank and also give your pill bugs the option to dig if need be.

Scattered leaf litter in addition to the other organic matter is also a must as it provides shelter and food!

For Armadillidium vulgare the ideal temperature is between 70 and 80 degrees Fahrenheit (21 and 26 degrees Celsius).

In the wild, Armadillidium vulgare will actually regulate their temperature as opposed to the environment entirely doing so.

The pill bugs will adjust their behavior to how cold or warm the immediate area is.

If it’s rather warm, they escape to the shadows or burrow underneath the top layer of soil.

As you would expect, cooler temperatures means that they travel to areas that have bright sunlight.

They will continue to have this behavior modification when placed in an enclosure, but it’s best to give them a leg up and keep the temperature rather consistent.

The Common pill bug is known for being rather hardy, handling a range of temperatures.

Europe has fairly consistent weather depending on the time of year.

Armadillidum vulgare do just fine unless the temperature suddenly shifts one way or another. They cannot handle extremes.

So then, what temperature range should you shoot for in your tank?

We’ll use the typical preference for most sow bug species held within captivity. T

he most ideal temperature should be between 70 and 80 degrees Fahrenheit (21 and 26 degrees Celsius). 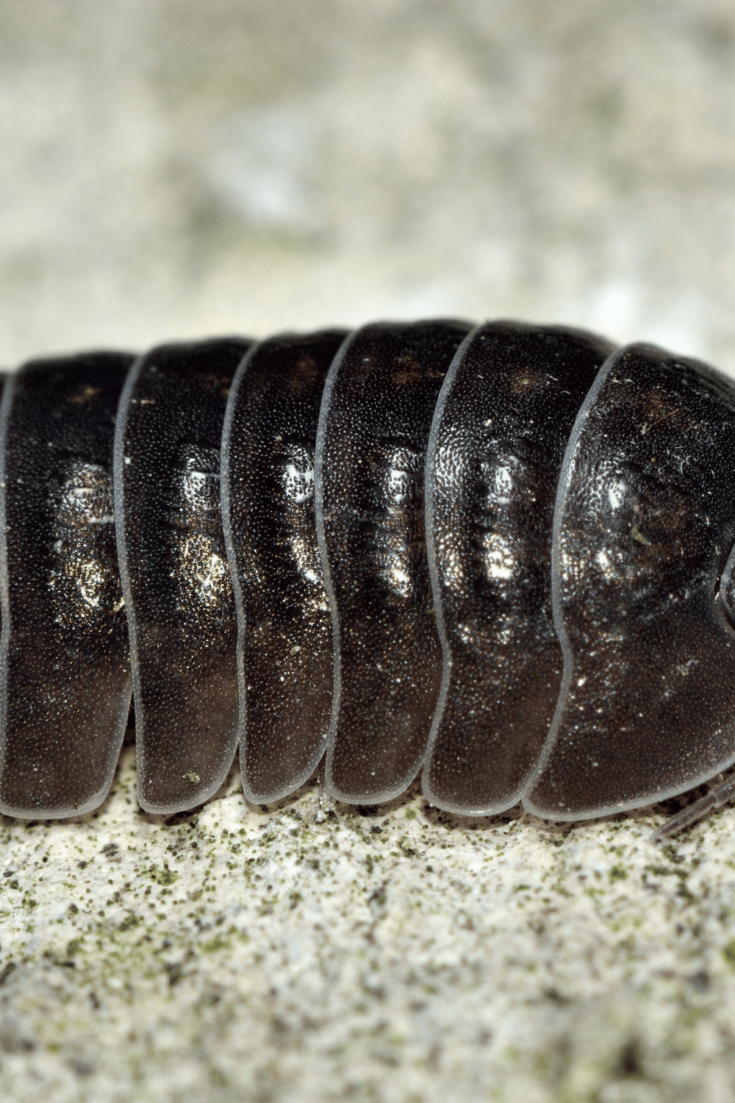 Armadillidium vulgare will need humid areas in their enclosure as otherwise there is the risk that they will dry out. Regular spraying of these areas with a spraying bottle is necessary.

Remember how we said that pill bugs use gills instead of lungs?

That means that they are dependent on moisture being in the air.

Humidity is a must for isopods. Well, most.

Contrary to the rest of the group, the Common Roly-poly can actually survive in lower levels of moisture.

Now just because Armadillidium vulgare can last for a longer mount of time with low humidity levels doesn’t mean that they should.

They still prefer to have dark and humid places to reside in.

You’ll want to mist the habitat every day, since these insects are nocturnal.

If you forget every once in a while, it’s not that bad, but the soil should be at least lightly dampened for the best living conditions. 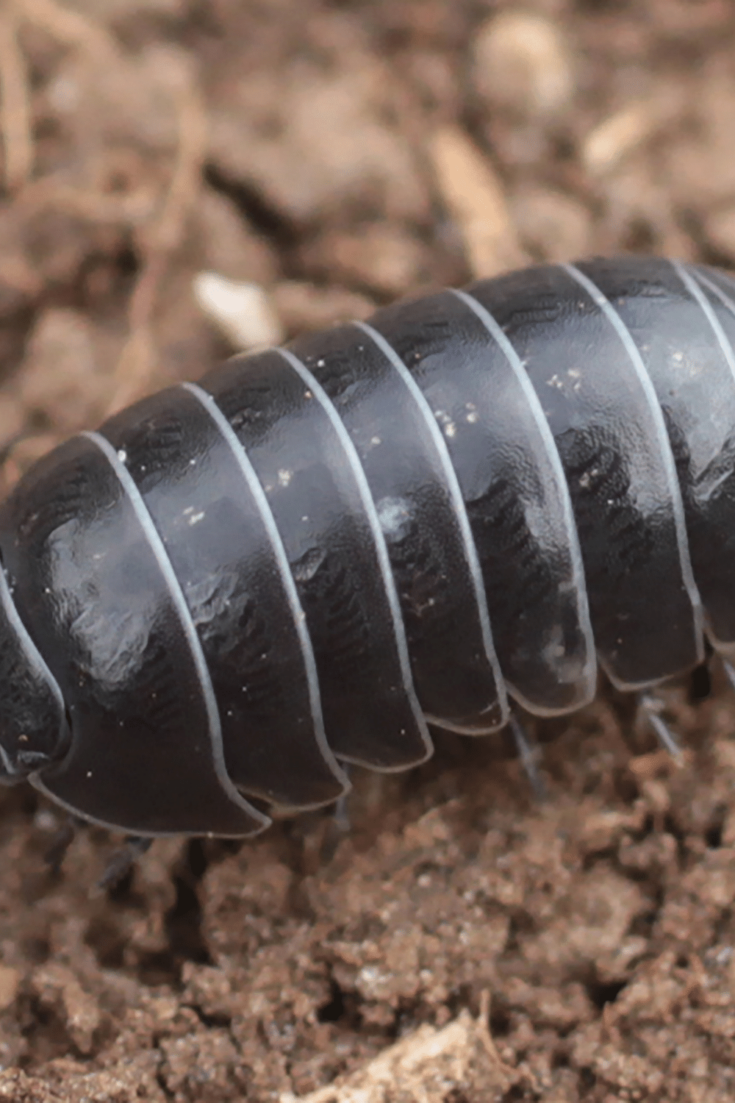 Armadillidium vulgare are labeled as being “detritivores”, or individuals that preys on the dead organic matter of other animals and plants. Provide them with leaf litter for food.

So then what should you add to their tank?

Leaves that have been boiled is among the top choices for diet that you should offer to your Roly-poly.

Finding decaying roots and vegetables can also be a good option.

Their favorite fruits and vegetables tend to be potatoes, apples, pears, and carrots. They also give them a fair amount of moisture. 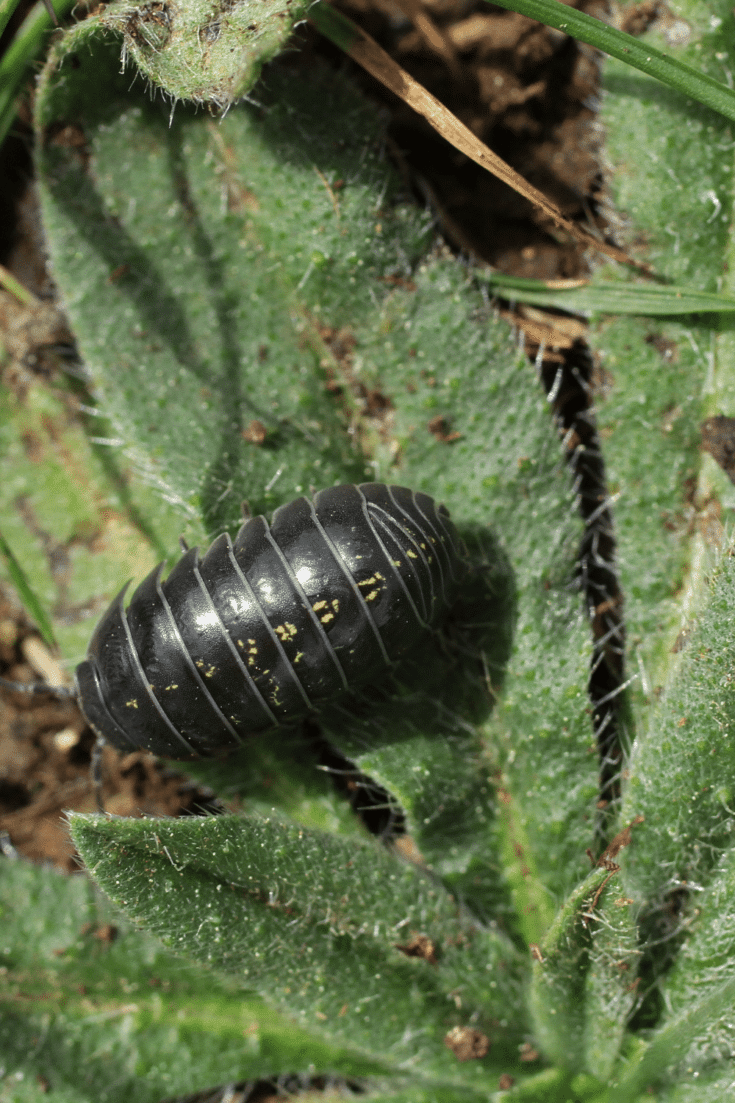 Armadillidium vulgare are easy to breed. They will breed readily in the summer months when all their needs in terms of humidity and food are met.

Isopods tend to breed more commonly in the summer and spring months.

They aren’t too tricky when it comes to breeding them in your own tank.

All you need to do is to make sure that all their needs are met, especially when it comes to humidity and available food.

Are Roly-polies harmful to humans?

Roly-polies are not dangerous when it comes to humans, as they do not have any toxins. The only indirect harm that they may cause is by invading their garden.

Can Roly-polies bite you?

The Roly-poly does not have anything that they can use to successfully bite a human, nor can they sting. That small ball that they roll up into is the only way that they can protect themselves.