My husband has become quite the twitcher … or should I say a wanna-be birder? He takes his notebook, his camera, and binoculars everywhere, and I mean everywhere.

When we go hiking (so this actually makes sense), when we visit our daughter, and even when we just drive to the grocery store (this one doesn’t make as much sense).

When he spotted a yellow bird with black wings in our garden, it took him a while to identify which yellow with black wings bird it was. And once he knew … boy, I didn’t hear the end of it.

The most common yellow bird that has black wings in the United States is the American Goldfinch, which is the state bird of Washington, New Jersey, and Iowa. The Lesser Goldfinch, Western Tanager, Orchard Oriole, Hooded Oriole, and Scott’s Oriole are other birds that are yellow with black wings.

There are a number of birds that have bright yellow bodies and black wings. 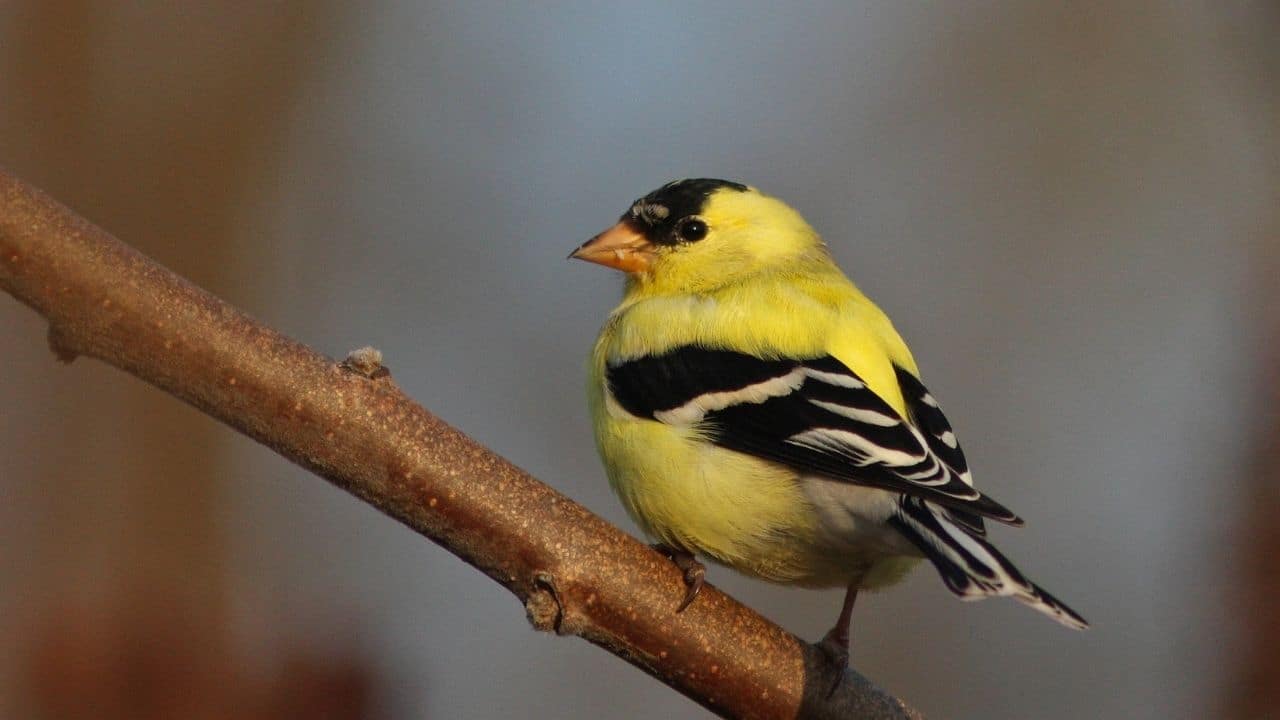 A popular bird that regularly visits your seed feeder in your backyard, the American Goldfinch may be the first bird that comes to mind when someone asks you “What kind of bird is yellow with black wings?”

An American Goldfinch is a small bird that measures 5 inches from its bill tip to its tail. While the bird is primarily yellow and its wings are black, I can also see some white stripes on the black wings.

The males are a brighter yellow and they also have a black crown.

In winter, the American Goldfinch molts and its body becomes a creamy brown. 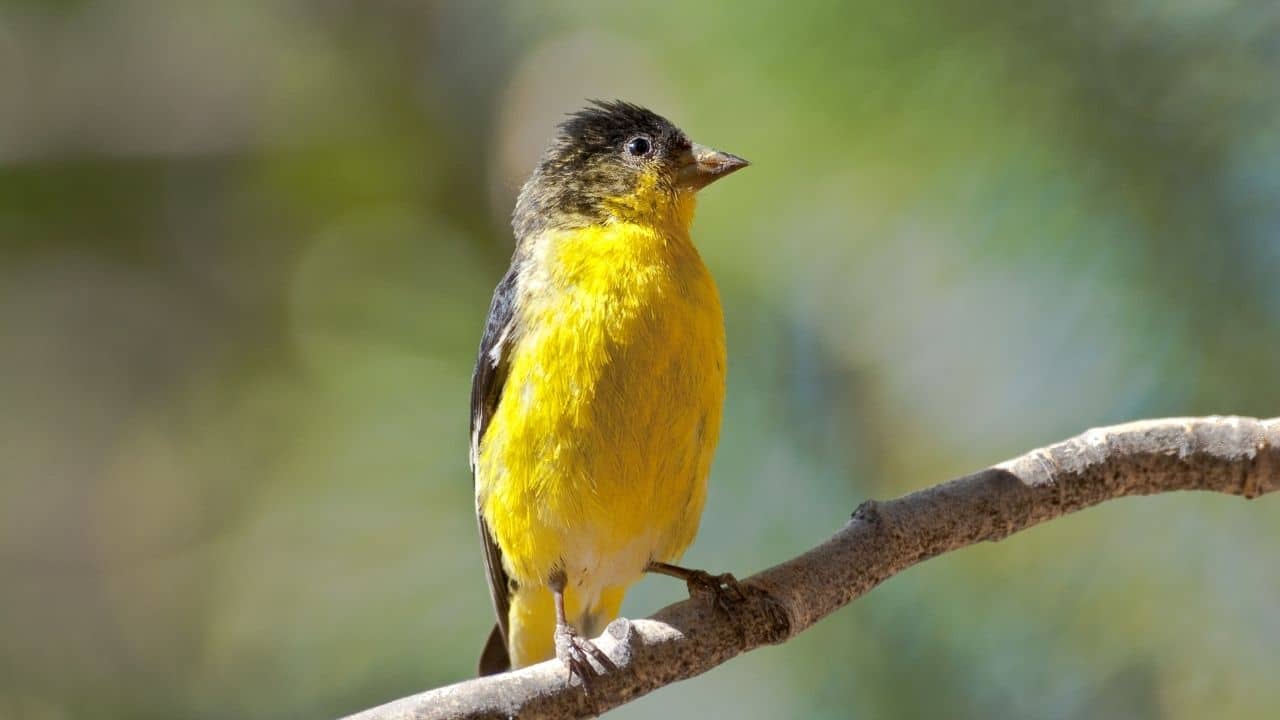 Resembling the American Goldfinch, the Lesser Goldfinch is smaller, measuring at 4 ½ inches from its bill tip to the tail tip.

While the Lesser Goldfinch’s body is yellow and the wings are also black with white stripes, its back is either black or yellowish-green.

As we’ve traveled through the States, my husband and I’ve spotted the Lesser Goldfinch in California, Arizona, Nevada, New Mexico, Utah, and Texas.

Where there is one Lesser Goldfinch, there are usually at least 5-6 other ones as these birds are often seen in groups. 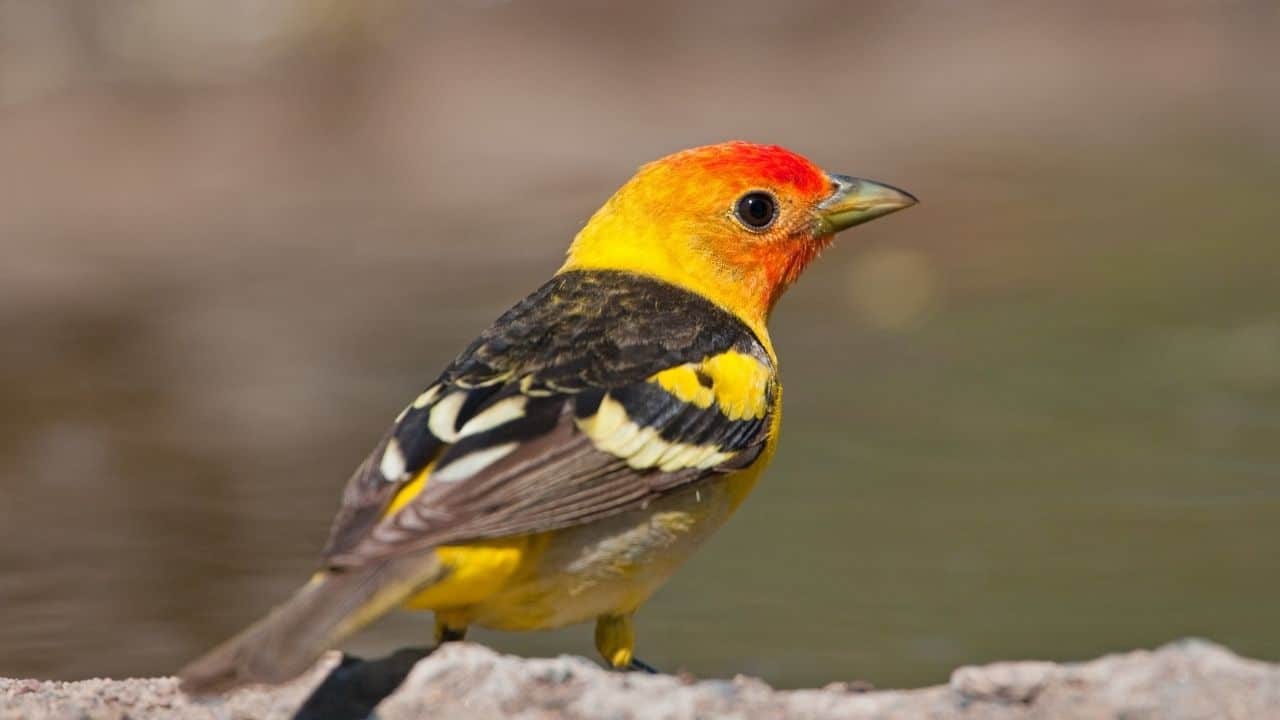 Another yellow bird with black wings, the Western Tanager also has some white on its wings, but less so than the goldfinches.

Interestingly, to differentiate between the American and Lesser Goldfinches and the Western Tanager, I just look at their heads.

A male Western Tanager has an orange-red head, which clearly sets it apart. The female bird is either yellow or gray with olive-green tail and wings.

This bird is larger than the Goldfinches, measuring at 7 ¼ inches from its bill tip to its tail tip. My husband has spotted the Western Tanager mostly in the Rockies. 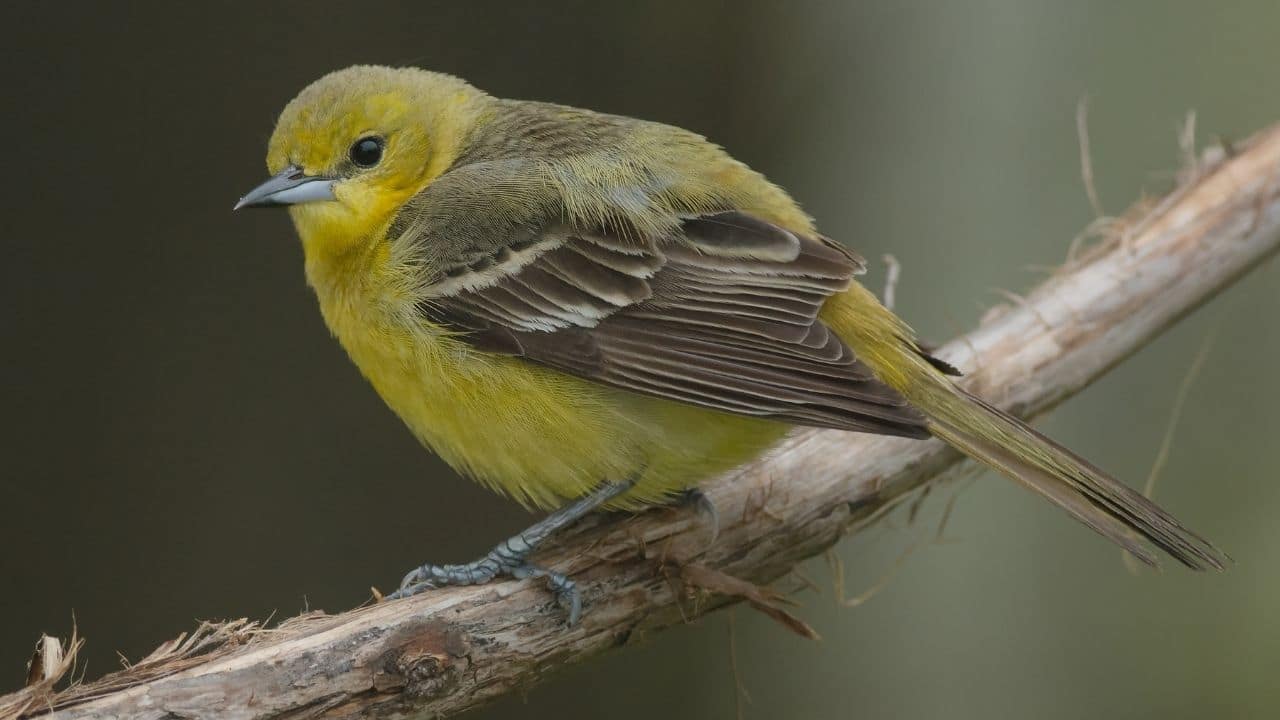 Another bird that measures in at 7 ¼ inches, the Orchard Oriole also has a bright yellow body with black wings. Its tail, back, chin, throat, and hood are black.

The females have olive-green wings.

My husband usually sees our Orchard Orioles by the fruit trees in our back garden during the spring and summer migration times. These birds can also be spotted in California, Texas, Arizona, and New Mexico. 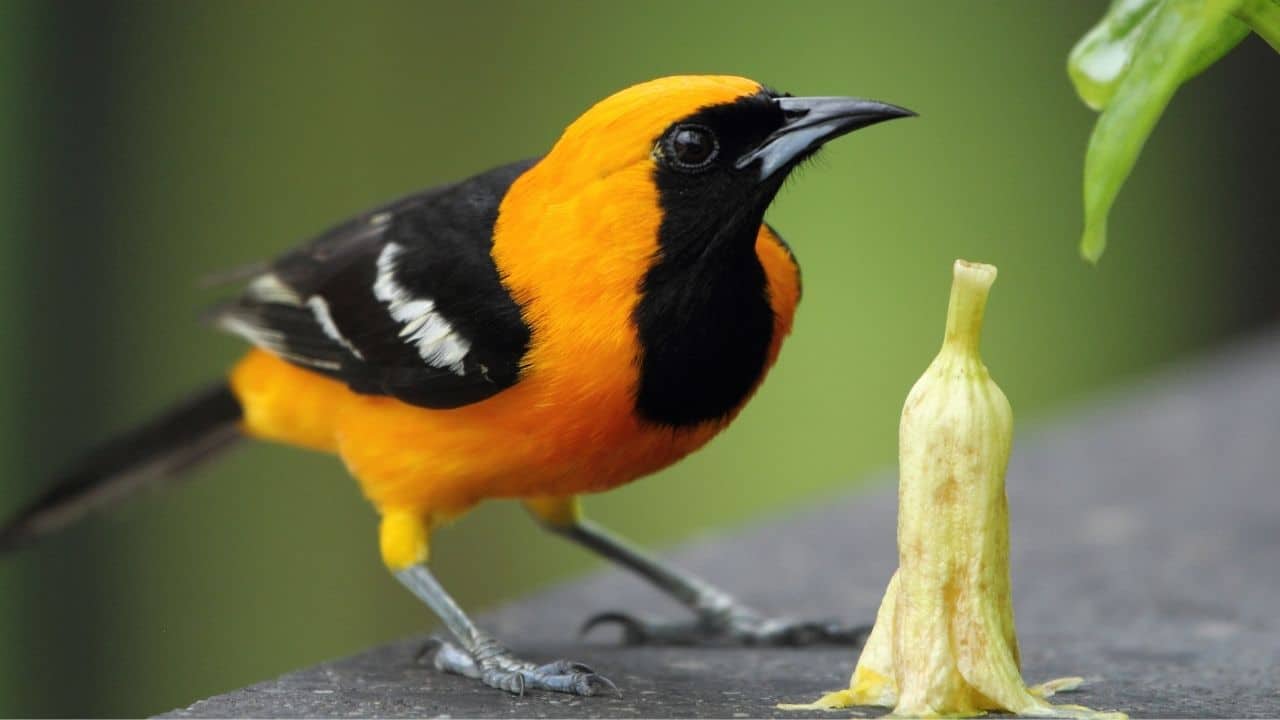 The Hooded Oriole, also called the bird of palm trees, can be spotted from California to Texas. The body of these birds, especially the males, is bright yellow, while their wings, throat, back, and tail are black.

The female Hooded Orioles also have yellow bodies, but they have dark wings and green throats.

The Hooded Oriole is slightly larger than the Orchard Oriole, measuring 8 inches from its bill top to their tail tip. 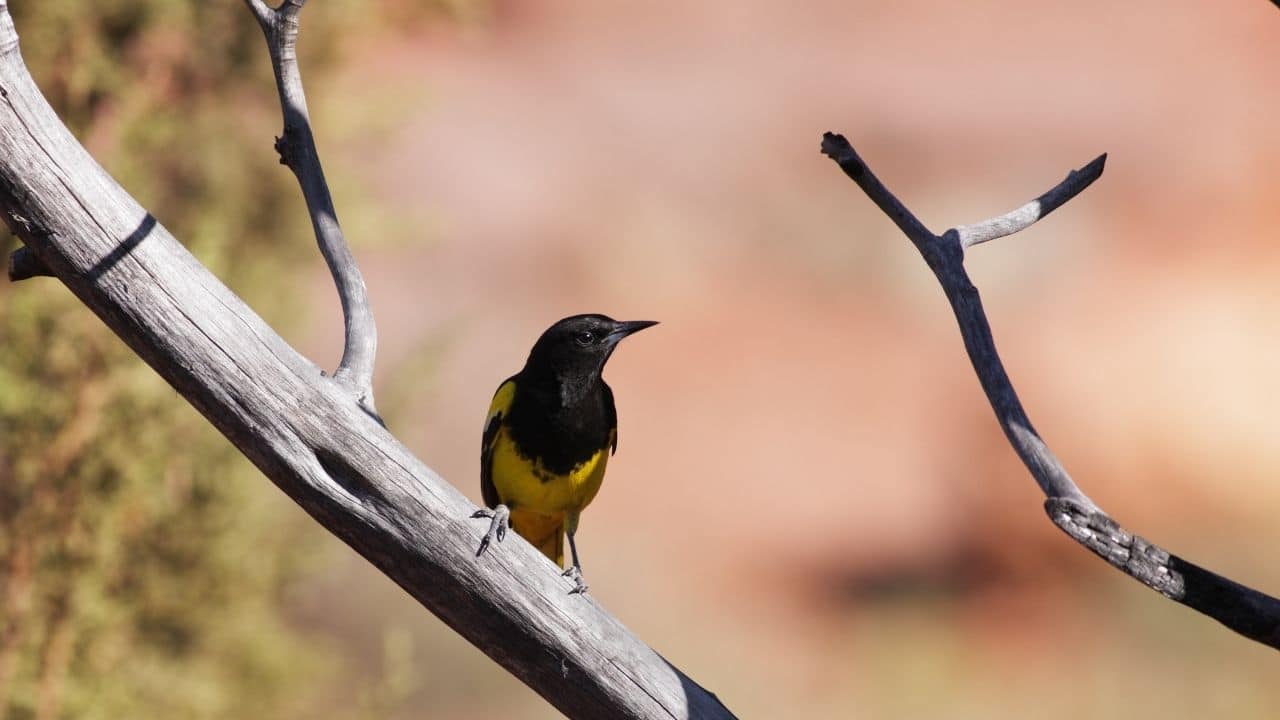 Measuring at 9.1 inches, the Scott’s Oriole can be seen in the mountain slopes and high deserts of the southwestern U.S. These birds are more black than yellow since their head, back, tail, and wings are black.

I’ve noticed that their wings have some whiteness. Their lower body is a bright yellow.

What is the lifespan of a Goldfinch?

Are the Yellow Warbler and Goldfinch the same?

What does it mean if you see a yellow bird?

Yellow’s commonly associated with positivity and joy. So if you see a yellow bird, it means that you will soon find joy and your outlook on life will turn positive.

There are quite a number of yellow birds with black wings that can be spotted all over the United States.

The American Goldfinch is the bird that most easily comes to mind if there’s a discussion on what birds are yellow and have black wings.

However, there is also the Lesser Goldfinch, the Western Tanager, the Orchard Oriole, Hooded Oriole, and Scott’s Oriole.

What yellow birds with black wings have you seen in your backyard or out in the countryside when you go for a ride or hike?