If you were to see an alpaca at a petting zoo, you might mistake it for the closely related llama. But how different are these two species? Do they share the same preferences as to what they eat? Or do they need separate dietary requirements? In this article, we will look at the diet of an alpaca, both in and out of the wild. 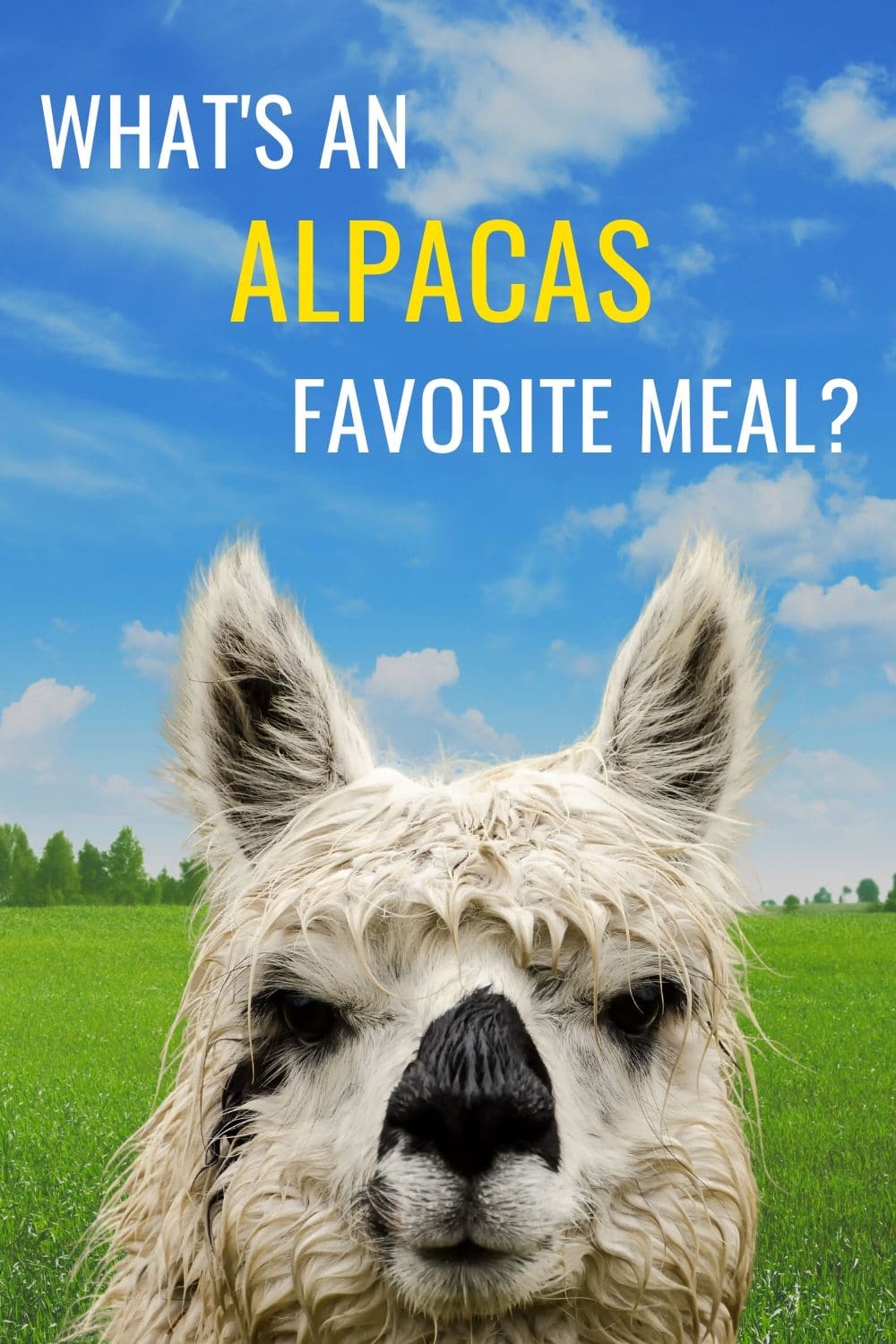 WHAT DO ALPACAS EAT?

When considering the type of food that an alpaca will choose to eat, it is clearly under the category of herbivore. In other words, it will only consume plants of various sorts. As a whole, alpacas tend to prey upon grass, leaves, bark, and even stems.

You might think that an alpaca will take what it can get. Not every type of plant, however, is up to the standards of these grazers. This can be explained by their family lineage.

The physical features belonging to alpacas (Vicugna pacos) sort them into the family Camelidae.

This group includes different types of camels, llamas, and alpacas. These animals all share long necks and legs.

They also are called even-toed ungulates, meaning that they lack hooves.

Instead, there are two toes followed by a leathery padon the bottom of the foot. The alpaca, in particular, is a camel species originating from South America where they have since been largely domesticated for their wool.

Knowing the family of the alpaca can give some insights into what they eat and why, both in the wild and in captivity.

WHAT DO ALPACAS EAT IN THE WILD?

It has been widely discussed whether or not alpacas truly exist in the wild. Historical findings suggest that these animals were first domesticated around 6000 years ago.

The closest living species of alpacas, the vicuña (Vicugna vicugna), has been believed to be the only wild ancestor. Located mostly along the central Andes in South America, these individuals are slightly smaller than alpacas at 35 to 65 kilograms as opposed to 45 to 86 kilograms found in alpacas.

Since these animals live in the Andes, they have to adapt to high altitudes where vegetation may be scarce. The vicuña is considered to be a thorough grazer, using its front teeth to snip the plants it finds along the way. The majority of their diet is made up of short perennial grasses that tend to grow in scattered clumps.

Alpacas are considered to be descendants from vicuñas found in the wild. They are listed as Least Concern, thriving with over 163,000 individuals. Alpacas no longer exist in the wild, meaning that their diet may vary from this close relative.

WHAT DO ALPACAS EAT IN CAPTIVITY?

The alpaca originated in Peru before being used for its wool and meat. In fact, this animal can be found in every corner of the world, aside from the Antarctic. There are two separate breeds of alpacas, but do these diets vary?

Huacaya Alpaca
Also known as the “teddy bear” of alpacas, this breed is characterized by its thick fleece. This is thought to be an adaptation as they were mostly found at higher altitudes. They are also the most common breeds of alpaca, making up approximately 90 percent of all living individuals.

Suri Alpaca
The Suri alpaca is more desired, mainly due to its wool. Instead of being thick, the coat is slightly curly and soft. They are also more rare, making up a mere 10 per cent of the world’s existing alpacas. Looking at their thinner wool makes scientists believe that they were kept at lower altitudes where warmth was not an issue.

Both breeds of alpaca tend to consume the same types of food. Alpacas found in captivity generally thrive off of grass and hay. Pellets are also used as they contain the correct vitamins and minerals. Each animal requires a daily intake of protein, fiber, vitamins, and minerals.

Protein is gained from consuming pasture grass. Hay, leaves, and long stems produce the necessary fiber. Lastly, supplements and green grasses have Vitamin A and E, which are a key necessity.

People who choose to raise alpacas for their wool need to consider the fact that their food can change based on the time of year.

DOES THEIR DIET CHANGE SEASONALLY?

An alpaca’s diet may vary depending on the current season. Even though these animals sport thick coats, they still need the necessary nutrients in order to survive. This is especially true in the colder months.

During the warmer months such as summer, spring, and even fall, alpacas can prey upon a larger variety of food items. Pasture grasses, hay, bark, leaves and stems all become a chosen meal.

Winter can be a bit more challenging. Straw and hay make up the majority of an alpaca’s diet during the colder seasons. This is because hay and straw will warm up an animal more quickly. Grass does not have the same effect.

HOW MUCH DO ALPACAS NEED EACH DAY?

As with any captive animal, it is important to consider how much food they should be fed daily. Too much can create problems such as obesity and joint problems.

Since grass and hay make up the majority of an alpaca’s daily intake, the food requirements can be measured in percentage. Most wool farmers recommend that a captive alpaca receive about 1.5 percent of the animal’s body weight in either hay or pasture grass. For example, an alpaca weighing about 56 kilograms should consume about 1 kilogram each day. Individuals who are either pregnant or maturing should eat 2.5 percent or their current weight.

Ruminants are considered to be animals that have four chambers in their stomach. This is essential for plant eaters. Surprisingly enough, the alpaca is not a true ruminant. They have instead been coined the term “pseudoruminants,” or fake ruminants. Those found in Camelidae actually get by with one stomach that has three separate areas for digestion. This digestive system aids in a more efficient intake of nutrients.

Similar to ruminants such as cows, an alpaca will thoroughly chew their food so that saliva mixes in with all of the consumed material. This helps pass the food down the esophagus. This food then moves along to the stomach.

The first chamber in the stomach is responsible for fermentation of the plant material. Next begins the digestion process through the release of enzymes. In the last chamber, the nutrients are broken down further and absorbed into the body. Alpacas can be seen chewing their food after it has been swallowed. This is referred to as “chewing cud”.

The chewing of food that has been partially digested helps to make sure that the meal is completely broken apart before digestion commences.

When comparing the teeth of a predator compared to that of prey, there are obvious differences. The alpaca shares the same dentition that other Camelidae members, even those who have remained a wild species.

There are 30 to 32 teeth present in a fully matured alpaca, generally at around six years of age. The six incisors located only on the bottom jaw are used to efficiently cut and chop any plant material. There are also six molars found on each jaw along with three premolars. The purpose of these teeth is to grind the food down further.

One interesting fact about the dentition of an alpaca is that they have what is referred to as “fighting teeth”. These are essentially canine teeth that can be found mostly in males. As the name suggests, these do not aid in digestion. Instead, they help protect themselves.

Without proper dental care, the teeth continue to grow past the point of a healthy range. The incisors, in particular, can become extremely uncomfortable and prevent the animal from eating. It is recommended that a tooth trimming happens annually to avoid complications.

WHAT ARE AN ALPACA’S WATER REQUIREMENTS?

It is evident that all living beings need water, but what about members of the family Camelidae? Camels are known to go long stretches without the drop of liquid. Is the alpaca the same?

Originating in the Andes as opposed to the Sahara desert lets one know that they do not need the same adaptations as a camel. In fact, captive-raised alpacas require water around the clock. Each animal needs a minimum of 5 liters in a day alone. They have been known to be quite picky when presented with stale water. Those who own alpacas tend to install an automatic water dispenser to avoid stressing their animals out. Alpacas are quick to become overheated because of their coats, making water a key component in regulating body temperature.

What vegetables do alpacas eat?
Some alpacas are given vegetables as a treat. These foods include carrots, celery, lettuce, cabbage, and pineapple. Choking can be present when consuming one of these foods. To avoid any risks, it is best to chop up any vegetables prior to serving.

Do alpacas make good pets?
Alpacas do make enjoyable pets when given the correct care. Other than the annual shearing and daily upkeep, a herd of alpacas can be a worthy investment. They become attached to their owners, especially when in contact with children. Their wool is also hypoallergenic. Those wanting a pet that they won’t become allergic to will find an alpaca to be a pleasant surprise.

Are alpacas smart?
Many do not know that these animals are indeed quite intelligent. Some herd animals are difficult to train. Useful behaviors such as loading in a trailer or being comfortable in a halter can be cumbersome to learn when teaching a flighty animal. The alpaca, however, picks up within a couple of repetitions.

Do alpacas spit?
One common worry among people is that camel-like animals tend to spit. These individuals do have the potential to spit, but it is seldom without the proper encouragement. Alpacas live in large herds where they need to share resources. The males oftentimes spit in order to establish a hierarchy. They will also do this to warn an oncoming predator or challenger.

Many don’t listen to the precursors that come along before these animals spit. If provoked, an alpaca will begin to show that it is bothered. Such displays include flattened ears and a stiff body. If you continue to aggravate the individual, the alpaca will inform you of your pestering through the use of its regurgitated food, or “spit”. Overall, these animals are quite friendly and will not spit without being mistreated.

Can alpacas die of loneliness?
Due to the fact that these animals live in large herds, they can become lonely without an adequate number of fellow individuals. If not kept with at least one other individual, they will even pass away. They thrive off of companionship. When properly cared for and kept in a large herd, these animals can live well beyond 20 years.

Oftentimes confused for the llama, the alpaca is a member of Camelidae that eats mainly grass, hay, and other plant material. With a three-chambered stomach, this wooly animal has become a wooly commodity in nearly every corner of the world. The next time that you see a lengthy alpaca looking your way remember that they rarely spit unless provoked. Instead, these animals are smart, intelligent, hypoallergenic, and provide us with a number of warm articles of clothing.