Llamas are native to the Andes according to Oklahoma State University., and thrive at altitudes between 8’000 – 16,000 feet.

The eyes of the llama are lauded worldwide as engrossing and hypnotic and their countenances as amicable and benevolent.

People stare in awe at the eyes of the llama, but what is it that makes a llama’s eyes so unique, so mesmerizing?

Are they all that different from other ruminant animals like goats, horses, and cows?

What are the frills in a llama’s eyes?

These frills in a llama’s eyes, which are structures that fold vertically like blinds, are called corpora nigra (also called iridic granules). They act as natural sunglasses protecting the llama’s eyes from harsh sun rays by decreasing the amount of bright light that can reach the retina. The llama’s pupils are elongated horizontally, and they are shaded by the corpora nigra, located on the iris’ borders. This is what gives the llama’s eyes their unique look. 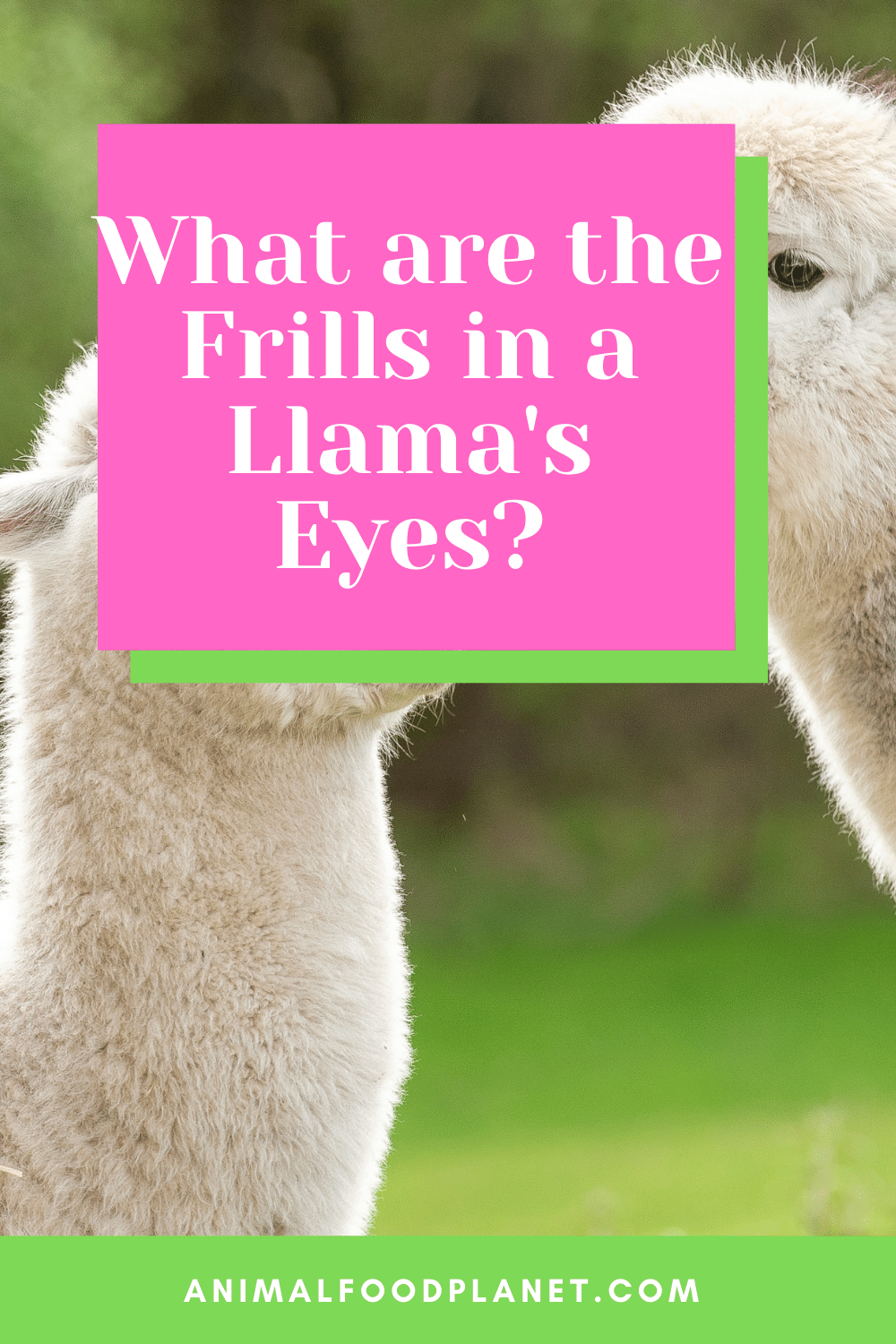 What Are The Frills In A Llama’s Eyes?

The frills in a llama’s eyes

There are a few reasons that the eyes of a llama are so alluring, but the most prominent one is the look their “frills” give to their eyes.

Do llamas have different eye colors?

Llamas’ eye color varies from one to the other. Like humans, their eyes can be shades of gray, brown, or crystal clear blue, and this may be one reason their eyes draw us in.

They can also have both blue and black in the same iris, a condition called heterochromia. 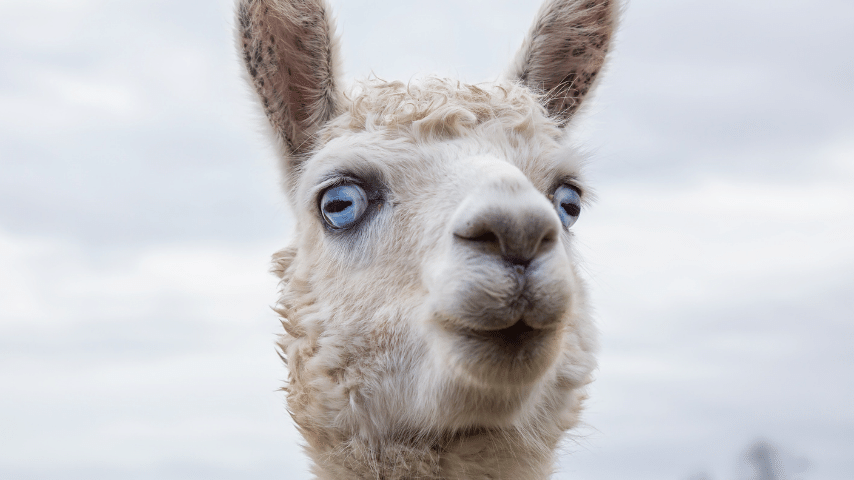 Do llamas have large eyes?

The eyes of a llama are slightly smaller than those of most other ruminants, such as horses and cows, but since their heads are considerably smaller, their eyes appear quite large.

Large eyes appeal to many who find them alluring, and this may be yet another reason why llamas’ eyes draw us in so.

However, because they have large eyes, llamas’ eyes are injured more easily than other ruminants, and they are more prone to inflammation and disease of the eyes. 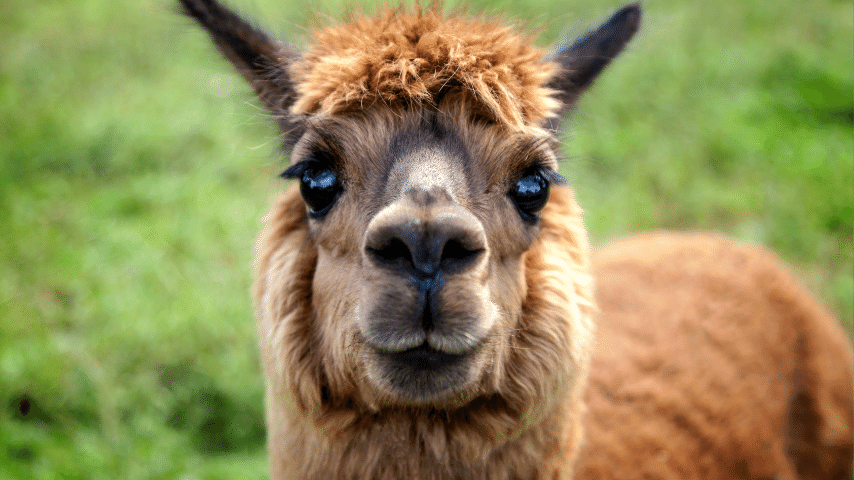 Llama Eyes Are Slightly Smaller Than Other Ruminants

Do llamas have long eyelashes?

The average llama has eyelashes most women would give anything for. They are long, curled, and perfectly shaped.

Americans pay good money to have long, curled eyelashes, so looking at a llama and seeing them possess this naturally is something to marvel at.

These dazzling lashes are not yet the last reason why we, as humans, find the llama’s gaze so alluring. 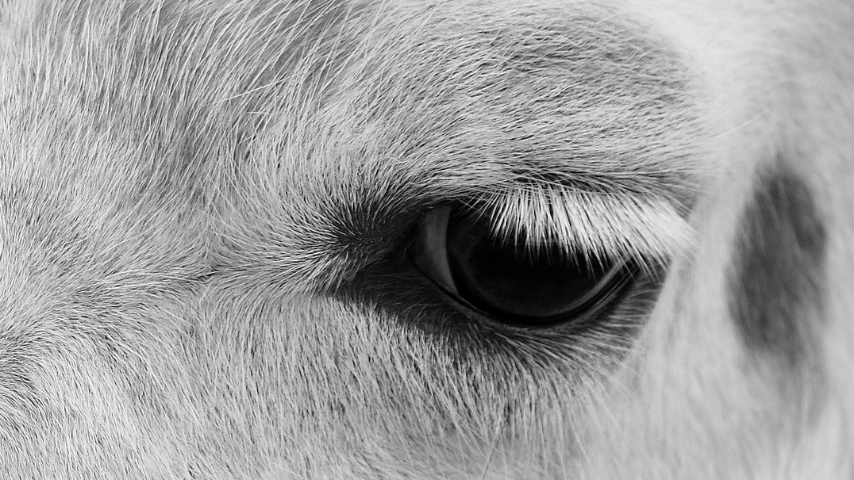 What are the frills in a llama’s eyes?

The frilly-looking or ruffly-looking things in a llama’s eyes limit the exposure of the sensitive parts of their eyes, like the retina, to harmful sunlight.

They are not exclusive to llamas, as alpacas, camels, goats, horses, donkeys, and other ruminants have them. Llamas possess these sunglasses-like features both on the top and bottom of their pupils in an elongated manner.

In the sunlight, these “frills” form a tent over the center of the pupil to provide shade for it, similar to a closed set of blinds. 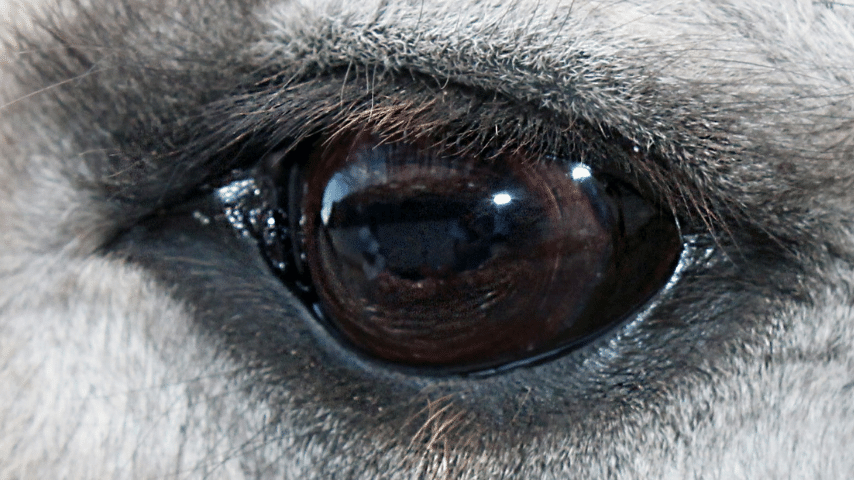 If a llama is reared around humans and socialized correctly, the animal is normally gentle and calm around people.

One more reason that humans find llamas so alluring is their countenance — the friendly vibe their face seems to give off, their warm gaze.

They may not smile, per se, but many times, it seems like they are doing just that. While llamas are known to spit, unless they are not socialized properly, they won’t direct this at humans but only at other llamas to assert dominance and authority.

While llamas are curious and will approach humans, they generally do not warm up to humans quickly, but once you’re in with a llama, you’re in for the long haul. 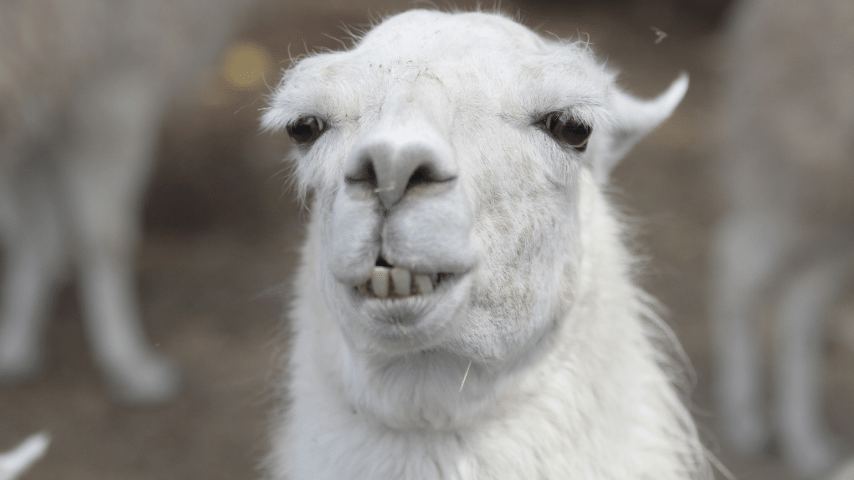 Llamas Friendly Vibe Face Seems To Give Off Warm Gaze

Llamas have superb vision, and they possess an ability that many animals don’t have — they have great peripheral vision, giving them a broad view of their surroundings.

Because of this, they can detect distant movement and pick up on a predator that may be stalking, which is a good thing since they are short on depth perception.

Also, because of their corpora nigra, they aren’t hindered by the bright sunlight that might leave some animals temporarily blinded.

Frequently Asked Questions About What are the Frills in a Llama’s Eyes?

Which eye conditions can a llama suffer from?

Due to the large size of their eyes in comparison to their small heads, the llama’s eyes are prone to injury, like corneal lacerations and abrasions, and disease. Infectious diseases, such as moraxellosis, aspergillosis, and equine herpesvirus type 1, and parasitic diseases, such as Thelazia californiensis, Toxoplasma gondii, and other diseases carried by certain species of flies, as well as hereditary conditions, such as blindness, microphthalmia, eyelid defects, and more, are examples. Llamas’ eyes are sensitive, so they don’t like eye exams and must be restrained and possibly even sedated before conducting one.

What are some other obscure llama facts?

Conclusion About What are the Frills in a Llama’s Eyes

Llamas are beautiful creatures that we, as humans, see many of our own traits in as we awe at their faces and gaze into their unique eyes.

Whether it’s their color, their size, their eyelashes, their frills, or just their all-around countenance, something about a llama’s gaze is enchanting.

Maybe it’s a combination of all these things at once — all I know is that these amazing animals are in a category all their own.