Have you ever watched an eagle take flight? Did you take the time to notice how little effort it took? These birds are among the highest-flying aviators, reaching altitudes of 10,000 feet, sometimes more. This is only one of the reasons as to why the eagle has symbolized courage, strength, and freedom. But how are these animals able to reach such heights? This question cannot be answered without the simple question, “What do eagles eat?” 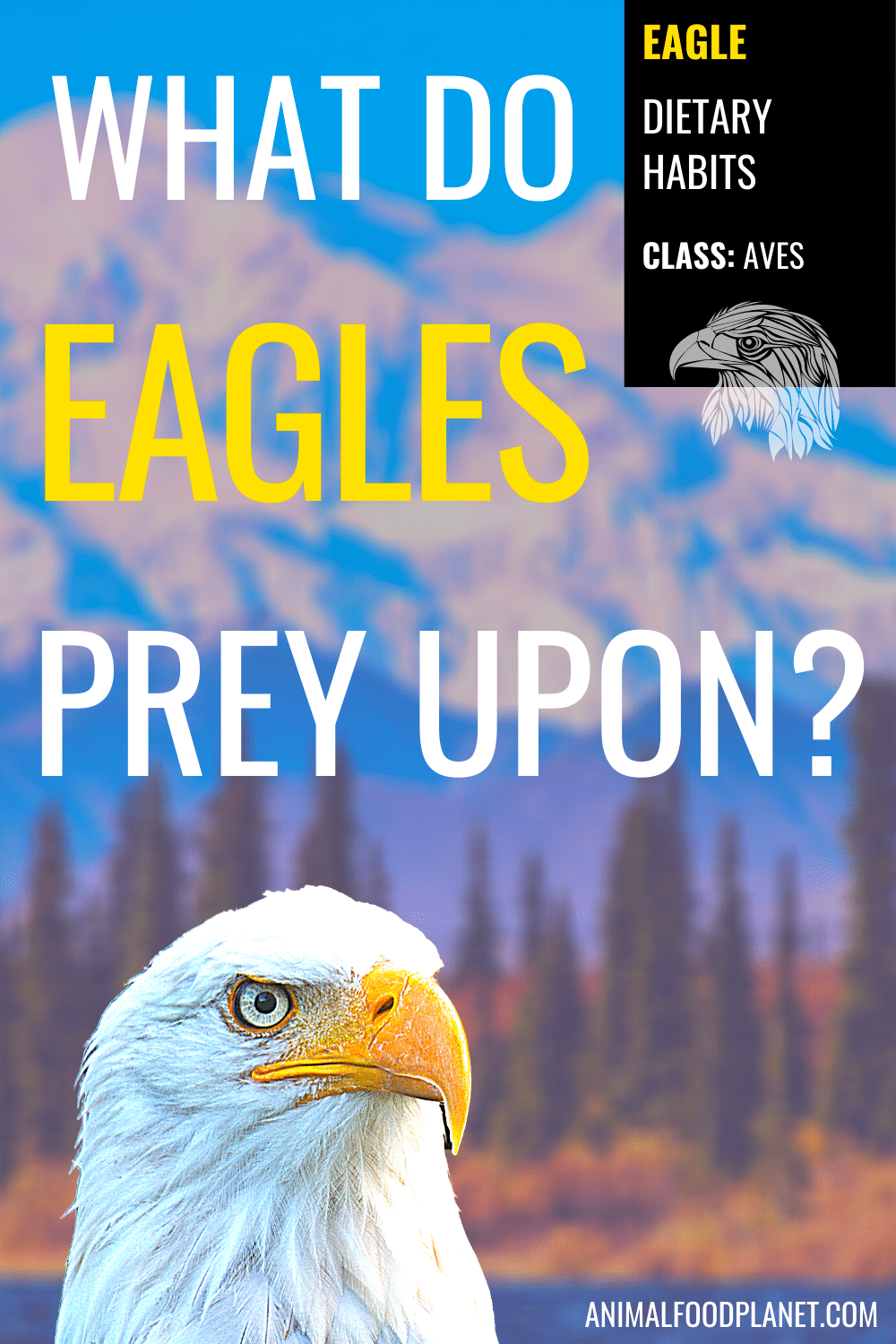 WHAT DO EAGLES EAT?

Eagles are strict carnivores, preying only on meat. These birds get their sustenance from small mammals, reptiles, fish and other birds. There are few species that have opportunistic tendencies where they will steal from others or eat from carrion, which is a dead animal.

The food that they eat has a lot to do with their physical characteristics, or morphology. Certain adaptations have gifted these animals with the title “Bird of Prey”.

It is well known that eagles most commonly include large birds. They technically belong to the family Accipitridae, all of which are grouped for their intensely hooked bills. Size and coloration play a role but will vary between species. No matter how small, eagles tend to share wings that are both powerful and aerodynamic. Another interesting commonality is in the way they watch their prey. Some birds, such as owls, are able to rotate their heads 270 degrees. Most eagles, on the other hand, look over their shoulder behind them just moments before they strike their prey.

With a hooked bill, powerful wings, and a keen sense of sight, these animals are able to thrive in the wild. 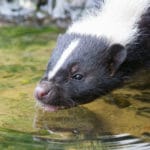 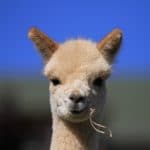 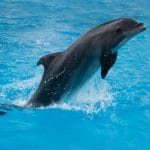 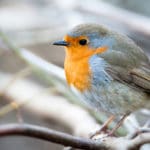 WHAT DO EAGLES EAT IN THE WILD?

The eagle is regarded as a cosmopolitan animal, meaning that you can find it in every corner of the world aside from Antarctica. In fact, there are over 60 species, all of which differ in hunting preferences and size. To truly understand what eagles eat in the wild, we must examine the most unique species found.

You can’t study eagles without the largest bird found in North America. The Golden eagle (Aquila chrysaetos) ranges in weight from 3 to 6 kilograms with a wingspan reaching 78 inches. For reference, a gull typically has a wingspan of 60 inches. As the name suggests, they are covered with a mixture of brown and golden feathers and sport a bright yellow beak. These birds prefer to dwell in the countryside where vegetation is tall. They will also take refuge in forests with minimal human development.

Those who study birds, ornithologists, have found their distribution is primarily located in North America while some may be found in Asia, Africa, Europe, and Alaska. With such a large size, it’s no surprise that they can eat a wide variety of food.

On the heavier end, they can attack deer and livestock. They tend to stick to small mammals such as squirrels, marmots and one of the favorites, the Black-tailed jackrabbit. In addition, they will consume various reptiles, fish and carrion.

The Crowned eagle (Stephanoaetus coronatus) is quite the spectacle with a colorful layering of dark brown followed by bands of white. The crown is the most distinctive feature. These birds weigh between 2 and 4 kilograms and have a wingspan of up to 70 inches.

It is commonly known as the African crowned eagle due to its distribution. The Crowned eagle is limited to sub-Saharan Africa, where it prefers riparian woodlands and some forested areas.

Given the name “Africa’s strongest predator” is anything far from the truth. These birds take on a myriad of potentially dangerous prey such as poisonous snakes, monkeys, young antelope, rodents, skunks, armadillos, and smaller birds. In fact, this is one of the few species of bird to hunt down a grown monkey.

Different from the other two species described before, the White-bellied sea eagle (Haliaeetus leucogaster) sports mostly white or grey feathers with darker wings. These individuals tend to weigh around 4.5 kilograms and have a wingspan reaching up to a staggering 86 inches.

With “sea” in the name, there’s no surprise that it can most often be seen around the coasts of Australia, New Guinea, Indonesia, India, and China. They thrive best when living in habitats that have coasts, islands or estuaries.

As one would assume, these birds do in fact get their sustenance from more aquatic animals. These meal options include fish, turtles and sea snakes. They will also prey on small mammals, fellow birds and carrion to round out their diet. Surprisingly, scientists have found that this species of eagle is more likely to hunt down a fish rather than a rabbit.

WHAT DO EAGLES USE TO HUNT?

There are a number of tools that an eagle uses to locate and kill the needed meal, whether that were a monkey, small mammal or fish.

It has been proved again and again that humans do not have the best eyes in the animal kingdom. Well, one of the top contenders for the best eyesight is the eagle. With eyes roughly the same size as ours, they are about 4 to 8 times stronger than a human with average vision. They also use both monocular and binocular vision, meaning that they can use each eye independently from one another if need be. These improvements have made it possible for an eagle to see a rabbit that is as far as 3.2 kilometers away.

If you were to take a close look at an eagle’s foot, you might notice 4 toes, or talons where one is facing toward the back. This special talon is called the “hallux”. With a toe that faces in this direction, the bird can grip the prey more easily. The Bald eagle (Haliaeetus leucocephalus) is the largest sea eagle in North America, weighing in around 3 to 6 kilograms. The talons of a Bald eagle have been proven to grip at a rate of about 400 psi, pounds per square inch. That is 10 times stronger than a human gripping your hand.

With such large wings, these birds are specifically designed to catch their prey from the air. Consider the fact that these wings not only have to support the weight of the eagle, but also the size of the captured prey. They also have the ability to conserve energy through feathers that are long and wide. This aids in gliding so that the bird can fly for miles without wasting energy that could be used for hunting. When in action, they are able to tuck in and become more aerodynamic. The Golden eagle, for instance, can fly up to 240 kilograms per hour when diving after prey.

Mentioned earlier was the curved bill, a trademark for all eagle species. But what exactly is the use of having a bill that is hooked? The fact of the matter is that this feature can help to tear the flesh, or skin, apart from their prey. The “hooked” edge snags on the fur and flesh, separating the two for easier digestion and more efficient meal. This is essential for an animal that doesn’t have teeth.

When it comes to absorbing nutrients, the eagle’s multi-parted digestive system gets the job done. In fact, an eagle’s stomach is approximately the size of a walnut. After the hooked bill tears down the prey into pieces, the food is moved down into the crop, which is responsible for storing food temporarily. After, the food is sent in small parts to the stomach. There are two parts when it comes to an eagle’s stomach. The proventriculus is in charge of breaking down the food with digestive enzymes. Then the gizzard continues to mash it up. Once this process is done, the food can be absorbed through the small intestine.

WHAT DO BABY EAGLES EAT?

Eagles need to find food for themselves and their young eaglets in order to keep the next generation alive. You might think that these babies require milk, but that is not the case. Instead, they are given meat from the moment that they can see. An adult eagle will go out multiple times a day in order to find easy prey such as a rabbit or gopher. They will then proceed to tear up the meat into small pieces so that the eaglets will be able to consume the prey.

These young birds need to be fed up to 8 times in one day, making it a constant demand for the parents until they are able to fledge or fly out of the nest. Fledgling typically happens anywhere from 10 to 12 weeks after they are hatched.

As a general rule of thumb, most eagles acquire most of their daily water requirements through the food that they eat. Eagles who incorporate a lot of fish into their diet do not need to go out and find water in the environment. This does not mean, however, that an eagle will drink freshwater when the chance arrives.

WHAT DO EAGLES EAT IN CAPTIVITY?

The most common type of eagle that is held in captivity is the Bald eagle. Most zoo visitors like to see these animals because they were once listed as endangered. In the wild, these birds typically live for about 20 to 30 years of age. In captivity, it is likely to see them approach closer to 50 years.

Regardless of what species the eagle is, it will typically be fed a diet of fish. This is because of the fact that it is an easy food that can be placed around the exhibit and mimic how the bird would act in the wild. Additionally, large portions of wild eagle species tend to thrive off of fish rather than small mammals or lizards.

How long can eagles go without food?

Because these birds have a crop for storing their food, they can actually go quite a few months without eating. The longest that an eagle can survive without taking down prey is 150 days, though this would be stressful on the bird’s body.

How much can an eagle carry?
There are a few misconceptions about how many kilograms an eagle can carry. Though they do have strong wings, these appendages have to support the weight of the eagle and the carried prey. Biologists have determined that an eagle weighing around 5 kilograms can successfully lift an animal that measures about 2 kilograms.

Will an eagle eat dogs and cats?
Unless you own a pet that weighs around 4.5 kilograms or less, there shouldn’t be any worry about an eagle carrying them off. There have been a few cases of these scenarios happening, but it is unlikely. An eagle would rather hunt another prey item that could be easier to hold on to with its talons.

Do eagles have any predators?
You may have remembered hearing that eagles are “Birds of Prey”, but they do have a few enemies. Other birds, such as ravens and Great-horned owls have been known to attack nests. Occasional egg thieves may also include squirrels and raccoons. As for adult individuals, humans are the biggest threat.

The eagle is a master of the sky with sharp talons, strong wings, and a hooked bill. They tend to prey upon smaller animals such as rodents, lizards, birds and even mammalian species. There’s no wonder that these animals have been used to represent courage with the title “Bird of Prey”.