Ear mites are a highly successful species. They found out how to make a living inside of animal ears.

They are found mostly in cats but can infect other animals and, very rarely, people.

The mites are very hard to see without magnification.

The size of a pinhead, they look like white or grey jelly beans with eight legs, and seem to be all belly without a discernable head, although they do have a head.

Ear mites (Otodectes cynotis) are round, white or grey mites with eight legs that are about the size of a pinhead. Some people are able to see them with the naked eye, but most people need a magnification device like a microscope. Ear mites cause the cat to produce a very dark, thick, wax that emits a bad smell.

Symptoms of Ear Mites in Cats and Dogs

It’s far easier to see the results of ear mite infestations in cats than it is to see the actual mites.

Dogs also suffer from similar symptoms from the same species of ear mites. They can get ear mites from cats.

Symptoms of an ear mite infection are: 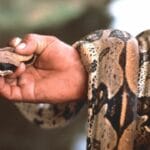 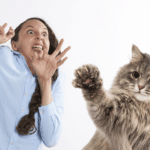 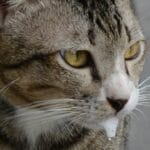 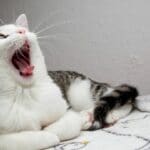 Warning: Cats with Ear Mites Can Be Cranky

Ear mites are not only itchy, they are painful. This means that touching the cat’s ears will often hurt the cat. In self-defense, the cat may lash out by scratching or biting.

Not all cats will do this, but it is wise to take precautions when checking any feline ears suspected of ear mites.

Have a flashlight and a tissue handy. If you can, get a helper to hold the cat. Have the helper wear gloves. Use gloves when inspecting the cat’s ears.

Shine the flashlight to check for discharge. Quickly wipe the tissue along any dark discharge. Let go of the cat and give a treat. You can sometimes see tiny white or light grey specks against the dark discharge.

You still should take your cat to the vet for a diagnosis. Ear mite symptoms are similar to other causes of ear infections in cats, such as a bacterial infection, so it’s important to get the cat to a vet to properly diagnose the problem.

catEar mites can often be easily treated with medication.

Treat All of Your Pets

Cat ear mites are highly contagious to other animals, especially dogs. Ear mites do not fly or hop great distances like fleas, but are extremely good at getting around.

Although they spend most of their lives inside of ears, they also make brief excursions along the body of their host.

When the infected cat comes into contact with another animal, the mites move right onto the new host and make a beeline for the ears.

Ear mites can also live for short periods of time on anything an infected cat touches, including beds, toys, and any blankets the cat may like to sleep on.

Vacuum rugs and clean any bedding in hot water. Clean the toys, if possible, or throw them out and get new ones.

It’s best to assume that your other pets have ear mites, even if they have not shown symptoms. Along with your infected cat, they need to be treated, too.

Otherwise, ear mite infections will just keep cropping up in your pets.

Another Warning: People Can Get Ear Mites

In the early 1990’s, veterinarian Dr. Robert A. Lopez noticed that his client’s daughter had a bad rash. The client’s cat had ear mites. When the cat’s mites cleared up, so did the daughter’s rash.

Wondering if people could get ear mites, and clearly full of the scientific spirit, he stuck a cotton swab full of cat ear mites into his own ear. He was able to actually hear the mites chewing.

After a full month of this unusual concert, the mites were easily treated. Then, he wondered if those particular mites had abnormally strong immune systems.

So, he stuck cat ear mites into his own ears two more times. Each time, the mites were able to successfully survive inside of his ears, munching away on the wax and skin oils.

Lopez would go on to win a 1994 Ig Nobel Award for his self-sacrificing research. He also lost part of his hearing during the experiments, although the hearing eventually came back.

Although he won an award for this experiment on himself, you should NEVER stick cat ear mites into your own ears.

Frequently Asked Questions About What Do Cat Ear Mites Look Like

Can I Get Ear Mites from My Cat?

Can Indoor Cats Get Ear Mites?

Cats that live strictly indoors are less likely to get ear mites than those allowed to go outside, but they can get infected in a number of ways. They can pick it up from infected pets in your home or from toys or bedding of infected cats.

Ear mite infections in cats smell like rotting fruit or garbage. Your cat has a sense of smell thought to be about fourteen times better than yours. If it smells bad to you, imagine how bad it smells to your cat.

The Least You Need to Know

Ear mites are one of the most common causes of ear infections in cats. The mites are tiny and white or grey, with eight legs. They are barely perceptible to the naked eye. The symptoms of ear mites in cats are far easier to spot than the actual mites.

Read what do cats eat in the wild next.

[…] all witnessed it. A cat stares down a bug as his eyes dilate and grow wider by the […]

My Kitten Has a Pot Belly Appearance - Is it Normal?

[…] matter where you obtained your kitten, it can develop problems that cause it to have a potbelly […]