How Long Do Dogs Really Remember? You Will Be Surprised! 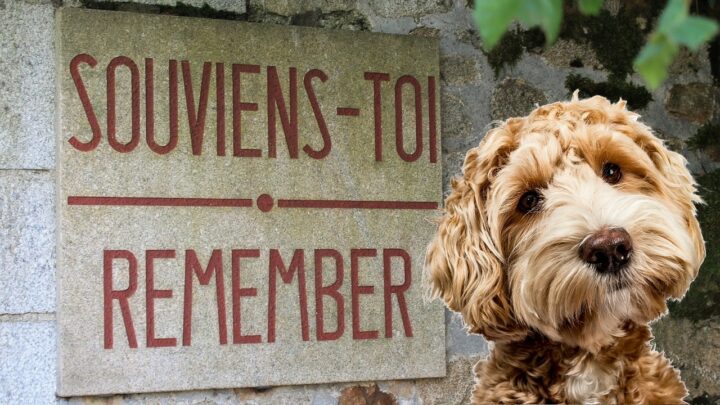 You’ve likely heard the statement “an elephant never forgets”, but what about dogs? They certainly don’t forget what happens when they hear the cheese bag being opened, or the time that you normally get home from work!

How does a dog’s memory affect their lives in a short and long-term sense?

In this article, we will dive into the minds of canines to understand just how long dogs remember and what that means for our interactions with them.

How Long Do Dogs Remember?

When looking at what a dog can remember, it depends on what scenario you are discussing. A dog’s short-term memory is about the same as ours, averaging at about 27 seconds. When regarding how long it takes to remember their owner, this may never happen. Dogs will fail to remember others if the interactions are not memorable, either in a positive or negative way.

How Does a Dog’s Memory Work?

It’s been said before that dogs are known to “live in the moment”. This suggests that they quickly forget what they’ve been through or learned and simply reside in the now. This isn’t necessarily the case.

It was mentioned earlier on in the article that a dog’s short-term memory is about average when compared to most species, but that doesn’t mean that they forget just about anything they’ve done.

That short-term memory merely means that they won’t be able to recall all of those experiences to mind. Interestingly enough, the way in which they store and remember those previous moments is different from our own, but not any less useful.

Humans have what is known as an episodic memory, where specific events are able to be withdrawn from that data bank down to the particular time in which it happened.

Dogs don’t operate in the same manner. Instead, they have an associative memory.

This is where memories are created and recalled because of the association involved. For example, this could be a dog not wanting to go into the car because of the time they went to the groomers.

How Long Do Dogs Remember People and Other Dogs For?

Now that you are able to understand how their minds work, let’s focus on how that relates to remembering others that they meet on a daily basis.

You can rest easy knowing that your dog will not forget you, even after a considerable length of time. The number of positive associations that dogs form with their owners makes this near impossible.

Those associations include all of the great bonding experiences you’ve had as well as being able to recognize your scent and face!

What about those who don’t meet your dog as regularly? Honestly, there isn’t really a clear-cut answer for this question. Those memories must be established somewhat frequently to solidify the memory.

The length of time that a dog will forget another person or animal also depends entirely on the individual and how their brain is wired.

If they hit it off with another dog, then it can take months of not seeing the other before they forget, whereas mere acquaintances are much shorter.

What Does a Dog Remember Most?

Most of what we’ve discussed in terms of a dog’s associative memory has been in regards to positive experiences. The truth of the matter is that dogs solidify experiences that are drastic, in both a positive and negative way.

In a general sense, a more memorable experience will have heavier associations. This can go in either direction. A positive experience could include walking down a certain road and expecting to have the ball thrown like they did before.

Negative memories typically involve being yelled at after chewing up furniture or urinating on the carpet. It isn’t the fact that these experiences happened, but rather how impactful the associations were.

How Does Memory Affect Training?

When it comes to the process of teaching your dog or puppy the right way to act, memory is pivotal. It could mean the difference between a frustrating experience, or one that allows you to bond with your canine.

The more exciting and engaging the training, the greater chance that a puppy or dog will be able to recall those memories for future instances. There is also something known as “muscle memory”.

Young dogs should only be taught in short sessions of about fifteen minutes. This will allow their minds to soak up the new information and thus increase their potential muscle memory.

How Long Does a Dog Remember Scent?

It’s widely known that the way in which a dog explores the world is through their nose! Their sense of smell vastly exceeds our own. To put it into perspective, we have roughly six million olfactory receptors within our nostrils.

Dogs, on the other hand, can have around 300 million. The link between a dog’s sense of smell and their associative memory is quite extensive!

We talked about the fact that your dog essentially would not be able to forget you. A great contributor for this is because of your scent.

Even if you were to leave for an entire year or more, your dog would reign in those associative memories that have been created over the years, in large part due to their nose.

There have been stories of dogs being separated from their owner for years at a time where the person is worried about being forgotten. In these situations, the dog will oftentimes recognize them before even coming into close proximity.

The ability to hold onto memories depends on how strong the association is. Smells that are paired with an experience that is either really exciting or jarring will last the longest, potentially for the remainder of their life.

When it comes to dogs, memories are created through strong associations. These can be from a positive or negative experience, as long as it is impressionable.

The stronger the associations involved, the more likely they will retain that memory. Dogs don’t tend to forget their owners because of this strong connection, though it can take a few weeks to forget others based on a sense of lackluster.

Using this knowledge, you can use highly motivational training to help your dog remember what they should do in the future!

Dogs certainly can remember negative experiences, but this depends entirely on how terrible the situation was. A dog is less likely to store a memory where it isn’t particularly impactful. That being said, it’s always best to handle situations with care as a dog can remember them for later down the road.

Do dogs have memories of previous owners?

It’s hard to say that a dog will remember a previous owner if it was a long time ago, especially if the memories aren’t entirely all that extreme. There has been data, however, to suggest that this can happen. It really depends on how impactful the memories were.

Do dogs think about the past?

Although they don’t have the same way of creating and storing memories that humans do, this is far from impossible. Dogs are able to recall past experiences just as we do though it isn’t necessarily to reminisce. A canine’s stored memories are there to help predict what is coming next so that they can be prepared to act. 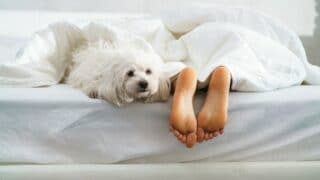 Next
6 Reasons Why Dogs Like to Sleep at your Feet