If you’re a dog owner, you’ll know that it’s not unusual for canines to slather each other with friendly licks.

But what are these reasons exactly?

Why do dogs lick other dogs?

Dogs may lick other dogs to get to know them, to show a desire to play, or to bond and relax. Sibling dogs, or dogs that live together and trust each other, lick each other to bolster their emotional connection. Licking can also be related to power rankings. Licking usually is a sign of deference and a way of indicating social status.

When Dog Licking Is Friendly

Friendly licking, especially on the lips, is typical of social dogs and dogs that live in groups.

If two canines have not met before, this is their way of learning more about each other and is usually non-aggressive and jovial.

Dogs that know each other may lick to signal that it’s playtime. 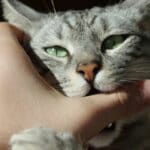 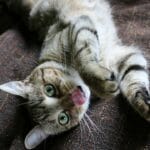 In this case, their greeting may be accompanied by the universally adorable play pose of front legs lowered to the ground and a butt wiggle in the air.

Pups that already know and like each other also use licking as a way to relax.

The act releases endorphins in both the licker and the receiver and thus is a sweet way for dogs to bond and show affection to each other.

In the wild, long before dogs were domesticated, they would lick each other to ensure closeness in their packs, which made them stronger as a team and, by default, aided their survival.

Although this is no longer strictly necessary, packing and closeness is still a strong doggy instinct.

What Social Grooming Is

Social grooming occurs between sibling dogs or dogs that live together and have a good relationship.

Licking, in this case, can be a helpful gesture and indicate a sound kinship, as they are simply helping to keep each other clean.

Licking in and around each other’s ears is particularly useful for bonded dogs, as they cannot reach these areas themselves.

This type of licking is a good thing. It’s a way for dogs to establish emotional bonds and closeness.

Through social grooming, they learn that they can rely on each other and trust each other.

A dog may use licking to communicate its social status or show deference to another canine it perceives to be in a more significant position of power.

Usually, this can be recognized by where a dog chooses to lick another.

Licking in the face area, especially when approaching from the under the chin, is one dog’s way of showing a more dominant dog its submissive intention.

It is communicating that it means no harm. If this gesture is met with return licks, it shows that the dominant dog accepts its new playmate.

When Dog Licking Becomes A Problem

Licking between dogs can become problematic if the object of a pup’s attention is not enamored with its behavior.

Not all dogs love to be licked repeatedly by others. Unwarranted licking can be met with growling, warning barks, and even biting.

Although licking between dogs is social and typical, some signs to look out for may indicate behavioral or medical issues.

Licking with no end, especially when another dog has had enough, can show obsessive behavior.

In this regard, redirecting your pup’s attention may be effective, but if excessive licking continues, you may want to consider a trip to the vet for a check-up.

Similarly, if one dog is repeatedly licking an area on another dog’s body, such as its mouth, teeth, ears, or private parts, this could hint at a medical issue.

The recipient of the licking may be giving off an odd scent or discharge or have a wound somewhere and needs a trip to the doctor.

Frequently Asked Questions About Why Dogs Lick Other Dogs

Why does my dog lick itself all the time?

A dog licking itself constantly can point to boredom, pain, or anxiety. This can also be an allergy symptom, especially if your pup is licking at its paws. If your dog is adequately stimulated and kept entertained, but the licking continues, it may need medical attention.

Is it good that my dogs groom each other?

Grooming is perfectly normal and good for relationship-building but can also cause issues if left unmonitored. Some dogs become obsessive about grooming their friends, and by licking certain areas too much, they can cause problems like ear infections and hot spots on the skin. Repetitive licking in one spot can cause abrasions on the skin, which are breeding grounds for bacteria.

Why does my dog lick me?

Dog licking can also be their means of showing you affection, to say hello to you, or to get your attention. Your canine companion may also be licking you because you are giving off a scent that they want to investigate. In some cases, dogs lick their owners to tell you they’re not well. If you notice your dog looking unwell or behaving strangely, you may need to seek medical advice.

Dogs make superb companions and are great at communicating, both with their owners and with each other.

Most of the time, licking is just a way for them to talk to each other and show each other some love.

Licking should, however, be in moderation, so if you suspect it is becoming a concern, speak to a vet or behaviorist to be sure.

Will An Untrained Dog Protect Its Owner? Let's See!

[…] it’s known that dogs can be trained to do many things including sit, stay, fetch, and even protect, those who are fairly […]