A lion’s tongue is large and rough — would it hurt if it licked your skin? By all accounts, it would hurt and a mere licking from a lion — or tiger — could potentially cause gruesome injuries.

Does a Lion’s Tongue Hurt you Skin When it Licks You?

Yes, it would hurt to have a lion lick your skin. Their tongues are rough and covered in spines (papillae) that help the lion hunt and devour their prey. These spines are sharp and face backward, almost like a barb, so even a lick or two could cause serious injury.

Think about it — a lion uses its tongue to clean its prey, such as a bird.

If their tongue is rough enough to remove feathers and fur from their dinner, what do you think a few licks would do to the skin on your arm, leg, or face?

Their tongues are aptly described as being like very rough, very coarse sandpaper, which could draw blood — if you decide to get cozy with a lion, or a tiger for that matter, be careful.

These big cats can lick down to the bone if they choose. 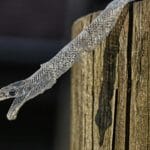 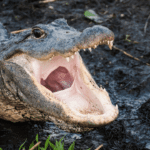 Similarly, the tiger has the same rough tongue with spurs which are almost hook-shaped, which helps them devour their food.

A typical tiger’s tongue is around eight inches long, compared to a human’s tongue, which is an average of four inches in length.

The tiger’s tongue also has sharp barbs called papillae, and they frequently take advantage of these spurs to comb their fur and groom their coat.

Tigers have an antiseptic quality to their saliva, so when they lick themselves, their skin, and their fur with their tongue, it is cleansing.

Lions and tigers have always been selected as rivals or opponents, due in part to the fact that they are both such magnificent and majestic animals.

While lions have tigers beaten in the size department, tigers seem more predisposed to fighting and squaring off with a competitor or predator.

Tigers have fewer teeth than other meat-eating cats, but they have the biggest teeth of all big cats, with a single tooth measuring up to three inches long. The back teeth of the tiger are deadly, giving them the ability to slice meat from the body of their prey.

You must not underestimate the lion, however. Despite the fact that the tiger seems more flexible and faster than the lion, the lion possesses a protective nature over his pride that could make him invincible in a fight.

Plus, the lion has his mane which serves to protect and shield their neck and head from whatever the tiger throws his way.

Since tigers typically go for the back of the neck of their prey, the mane protects the lion from being bitten, which may help him win the battle. An interesting fact about lions — the darker the lion’s mane is, the older they are.

Another compelling characteristic of the lion is its mighty roar. This bellowing sound can be heard from up to five miles away, so that could also help them fare well in a fight.

Though the lion is a bit less industrious than the tiger. While the male lion sleeps approximately 20 hours each day, the females are the ones responsible for hunting for the pride.

If productivity is a contributing factor in the debate over lions versus tigers, the lion’s chance of beating the tiger may be quite slim.

Which species has the roughest tongue?

That bragging right goes to big cats, particularly tigers and lions. The spurs and spines on their tongues can cause damage even without a bite. This helps them clean and eat their prey.

Are lions or tigers friendlier?

Typically, lions are considered friendly only because they are more social animals. Tigers are more withdrawn and solitary, as well as being faster and stronger than lions.

Why do lions lick?

Lions and tigers both use their spiny, spurred tongue to help them hunt and eat prey. They also use their tongues to groom, like any other cat.

Maintain eye contact while you slowly and gingerly back away from the animal, as far as you can. Since tigers prefer the element of surprise, they may be less inclined to attack and eat you if you maintain eye contact. Do not take your eyes off them.

Who’ll win when a tiger and a lion fight?

Each species has traits that would make them a worthy competitor in any fight. The Lion is usually bigger and weighs more, but a tiger seems more spry and often goes for the neck during combat. There are many variables to consider, but historically speaking, the tiger may have the edge.

It would hurt to be licked by a lion, and it is not advisable to go looking for affection from one of these big cats.

Lions and tigers both have unique traits that include this spiny, barbed tongue that can do some damage and that helps them survive in the wild.