After watching The Lion King for the umpteenth time, my son decided that he wants to learn everything there is to learn about these apex predators.

During a Google search to help find some interesting lion facts for him, I came across a few YouTube videos in which a lion ate another lion.

I started wondering if this was natural behavior for lions, or if they only eat each other in special or extenuating circumstances.

I arranged a Zoom meeting with a wildlife biologist to learn more.

Do Lions Eat Other Lions?

In general, lions don’t eat, hunt or kill other lions. They will only eat another lion if times are desperate, like if there is a severe food shortage, and even then, a lion may only kill and eat the oldest lion in the tribe. They also only eat the cubs when staking their claim on a lioness.

Why Lions Don’t Eat Other Lions

Lions are carnivores, so they eat other animals or rather, grazing animals that are their natural prey. As such, lions aren’t cannibals by nature.

This means they don’t generally eat other meat-eating animals since these animals — other lions included — don’t provide the nutrients these predators need to survive and thrive.

Moreover, the meat from other carnivores doesn’t taste as good as the mostly herbivore animals that lions prey on and eat in the wild. Mufasa may not taste nearly as nice as a juicy gazelle. 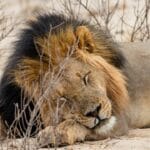 Reasons Why a Lion May Eat Another Lion

Here are the reasons a lion can kill and eat another member of its tribe:

Nature sometimes creates unusual behavior in animals. I learned about the one instance of the Mapogo lion coalition in Sabi Sand in the Kruger National Park in South Africa that killed more than 100 lions and cubs in just more than 12 months.

The Mapogo brothers killed other lions in a quest to dominate an area of 170,000 acres and rule 8 prides.

There were even reports of one of the lions eating some cubs.

In the wild, a lion sometimes challenges another alpha lion from a different pride. Whoever wins becomes the leader and inherits the fallen leader’s pride.

In this case, the new leader may inherit cubs from the other pride too, and these cubs may be killed and eaten to make sure that these genes aren’t passed on.

Lionesses aren’t ready to mate until they’ve stopped nursing, so by killing a lioness’s cubs, the new leader “stakes his claim” on the female lion, who will come into season much faster then.

There are times when the lioness convinces the leader not to kill her cubs, and then the male lion protects them as if they are his own. This will depend on the male lion’s aggressiveness and age.

Lionesses also sometimes commit infanticide, though this is rare. A female lion may kill her offspring if the cubs behave strangely or have some sort of physical impediment.

In this case, the lioness doesn’t see the cub as hers, and with no “mother instinct,” she kills the cub.

Cubs are also killed when there is a lack of resources, and a female lion may kill her cubs if it increases her chances of survival.

To remove the evidence or prevent attracting attention from other predators, the mother may eat her cub.

Lions may also kill and eat elderly lions or those who are injured or sick if there is food scarcity.

Since lions don’t normally eat other lions or meat-eating predators, what do they eat in the wild?

A lion’s diet mainly consists of meat (about 11-17.6 pounds or 5-8 kilograms per day), which these predators obtain by preying on medium to large hoofed animals, such as zebras, wildebeest, antelopes, African buffalos, and other animals.

Do lions have predators?

Humans are the biggest threat to the lion population, and in the wild, lions don’t have natural predators since they are apex animals. Cheetahs and hyenas are natural enemies of lions since they compete for food in the wild.

Why would a lion eat a lion?

A lion eating a lion isn’t something that often happens and only in certain circumstances. For example, one lion may kill or eat another if they are desperate for food.

After learning all of this, I wasn’t sure what to share with my son.

I certainly didn’t want to show him graphic videos of lions hunting and eating other lions, but in the end, I decided to be honest but to adapt the information to what his 5-year-old brain will understand.

I shared that sometimes people and animals do things that are out of character, so lions may kill and eat other lions — like an injured or sickly elderly lion — if they are very hungry and no food is to be found.

The other reasons why lions eat each other? I’ll share that with him when he’s a bit older.