Why Do Cats Bite Their Claws? That Makes Sense! 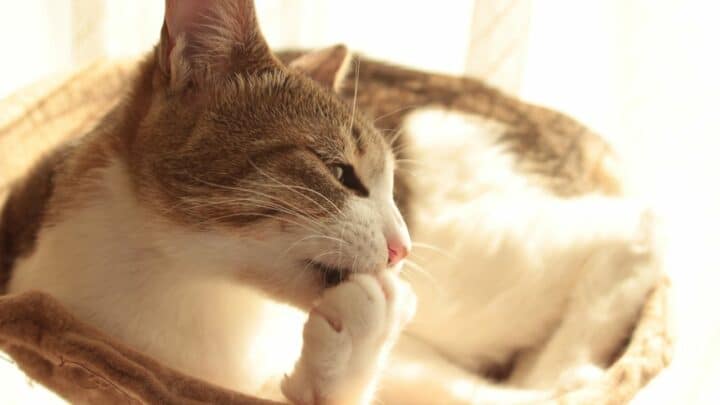 Claws are very important to cats for grooming, hunting, self-defense, and marking territory.

Felines take care of their claws most of the time, including biting them to keep them sharp.

Even with their fastidious self-pedicures, cats still may need their claws clipped.

Why Do Cats Bite Their Claws?

Cats bite or chew their claws mainly to keep the claws in tiptop shape. They may also chew on claws out of anxiety or from an infection or irritation. Even though cats chew their own claws, they still need them clipped if they grow too long.

Get to know how your cat normally does things like grooming, since any changes in behavior mean that they could be sick and need to see the vet.

Many medical conditions can be successfully treated they’re caught early on.

Cats keep their nails short by chewing and scratching on things.

It’s vitally important to have scratching posts available for your cat or the cat will claw anything, including your expensive furniture.

According to PetMD, many cats often like to hide when they want to chew their claws.

If you have been living with your cat for a while and just saw him or her chewing on the claws, do not be alarmed.

Not all cats will hide away. It’s important to know what your cat normally does.

If you see your cat chewing on his or her paws all the time, there could be a problem. Cats normally bite or chew on their paws to remove dirt, litter, or other debris.

However, they shouldn’t spend hours on this.

Cats can get nail or paw infections, which causes them to itch. Cats will then constantly chew or lick their paws and nails to ease the itch.

Contact with things that irritate the paws, like household cleaners, will also make a cat constantly lick or chew the paws.

If you take your cat to the vet and nothing is physically wrong, then chances are the cat is stressed out about something.

The Importance of Claws to Cats

If your cat seems to be fussy about his or her claws, that’s because to cats, claws are a big deal. They are essential tools for personal hygiene and for survival.

They need to be kept short and sharp for them to work best.

Cats need their claws not only to scratch an itch but to keep their fur clean. Claws work like combs to remove dead fur and tangles.

A good claw-combing also feels good. It’s like a little massage for the body.

Cats also use their claws in catching prey, for self-defense, and to mark territory.

Cat paws have scent glands, so making a claw mark on the ground on tree bark serves to leave not only a visual mark but a scent mark, too.

Your cats will still care for their claws, even if they live all their lives indoors.

A Note About Older Cats

Older cats are often not as flexible as younger cats.

This could be due to arthritis or another condition that makes it too painful or too difficult to chew on the back claws. They often will still be able to chew on the front claws.

Check the back claws of an older cat at least once a week to make sure they are not getting too long.

You may need to back claws more often than their front ones.

Another problem with older cats is that they often lose the ability to retract their claws, meaning they are exposed all of the time.

Cats like this need their claws trimmed at least once a week to keep them from tearing. Keeping the tips blunt also makes them less likely to inadvertently scratch you.

Tips About Clipping Your Cat’s Claws

If you really do not know what to do, please have a groomer or a veterinarian show you what to do.

It’s good to start training your kitten as soon as possible to get used to claw clipping. Do it weekly to turn it into a routine.

Kittens and cats like routines. They do not unpredictability.

If your cat is older, try clipping only one claw a day so as not to get the cat upset.

Be sure to have a nice treat handy to reward the cat for putting up with nail trimming.

When holding the paw, do not pull at the cat’s arm so it is fully extended. This will make the cat fight.

Bend over the cat, hold him or her close to you and keep the cat’s leg as close to the cat’s body as you can.

Gently squeeze the feline’s paw so that the claws will come out, making it easier for clipping.

Only clip off the tip, otherwise you may hit the nail quick and cause it to bleed.

Bleeding can be controlled by wrapping the paw in a towel or gauze for five minutes to control the worst of the bleeding. Use styptic powder to help close the wound.

Frequently Asked Questions About Why Do Cats Bite Their Claws

I Found My Cat’s Claw on the Floor. Should I Be Concerned?

The claw part you found should be hollow. Cats normally shed the top layers of their claws when they groom themselves. If the claw is not hollow, check to see if your cat’s paw is bleeding and control the bleeding, then call the vet.

If My Cat Bites Her Claws, Do They Still Need Clipping?

Many times, cat claws grow longer than they should. This could be due to a variety of factors, such as the cat getting arthritis and so cannot bend to chew on the back claws. Claws can snag on carpeting, blankets, or something else and painfully tear off.

It’s totally normal for cats to bite and chew their claws. Cats do this to keep their claws clean, sharp, and short.

If a cat is biting or chewing the nails or paws more than usual, then call the vet.

Check your cat’s nails frequently to see if they need trimming. Long nails are prone to tearing off.

If you’ve never experienced clipping your feline’s claws before, better have a groomer or vet show you how. 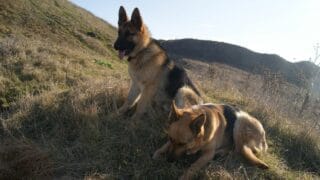 Previous
How To Get A German Shepherd To Gain Weight The Right Way! 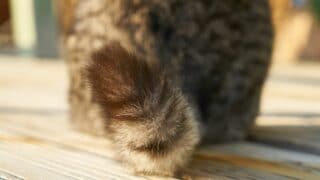 Next
Why Do Cats Act Weird When You Scratch the Base of Their Tail?

[…] cats can most certainly be an elusive species, most of them enjoy human interaction, at least to an […]

[…] may be relieved to know that it’s common for cats to behave strangely when their tail is scratched. It’s not just you or your […]