Lately, I’ve been hearing mixed opinions about when puppies can leave their moms. Some say eight weeks, and some say twelve.

In this article, I’ll take a deeper look at exactly when a puppy can be separated from its mom.

When Can a Puppy Leave its Mom?

At an absolute minimum, a puppy can be separated from its mom at 8 weeks. However, it’s better to let puppies stay with their mom and siblings (if they have any) for 10-12 weeks. More time spent with its mom allows a puppy to develop both psychologically and physically.

Why Wait to Separate Puppies from their Moms

Baby dogs need to undergo two important phases of life before being taken away from their moms, namely socialization and weaning.

Each of these is paramount to their development, and interrupting these vital stages can leave dogs with lifelong stress and anxiety, or worse, physical or behavioral issues.

Socialization begins from the day a puppy is born. They learn reciprocal communication through whining for food and knowing that their mother will attend to them.

Their mothers also use short, sharp sounds to tell them when they are displeasing her. 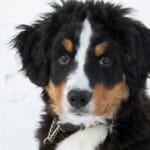 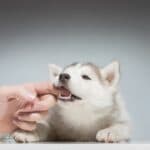 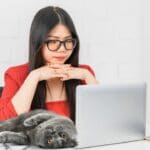 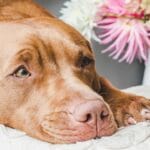 Similarly, their interactions with their siblings show them important behavioral cues. Play fighting teaches them when it’s appropriate to nip and bite and when it isn’t and how to behave as part of a pack.

These experiences provide puppies with a sense of security, which is a much-needed part of developing an independent, confident dog.

Correctly weaning puppies is just as important as socializing them. A mother dog’s milk is full to the brim with the exact nutritional components needed to bolster a young dog’s development.

In cases where there is no alternative, this milk can be replaced with an artificial formula, but it is not recommended and is rarely as good as the real thing.

This is why it’s best to leave puppies with their moms for between eight and twelve weeks.

When to Separate Puppies from their Moms

Technically, puppies can leave their moms at eight weeks, but the recommended timeframe is ten to twelve weeks. The longer puppies stay with their moms, the more likely they will develop into healthy, happy, socialized dogs.

From the age of three to six weeks, they start to wean off their mother’s milk, but the following weeks are crucial for their emotional and psychological well-being and development.

At only six weeks, they lack the skills of adult dogs and are still very much in a learning phase.

While eight weeks is the legal age that puppies can be rehomed, many researchers and veterinary professionals agree that ten to twelve weeks is better in terms of socialization.

A few short weeks may not seem like they can make a big difference, but this period is vital for exposing puppies to people, other animals, different foods, and experiences.

From their littermates, they learn about impulse control, appropriate behavior, and bite inhibition, which ideally prevents behavioral issues from arising later in their lives.

With that being said, an eight-week-old puppy that receives plenty of time and personal attention from its new owner can fare just fine.

Owners just need to be mindful of the development that young dogs need to undergo to emulate it with their new puppy for the vital weeks of its early development.

They will need access to a range of stimuli, but not so much that it overwhelms them.

If you’re not 100% sure what your eight-week-old puppy needs, consult a vet or breeder.

What Happens to Puppies Taken too Early from their Moms

Puppies that are separated from their moms before eight weeks are at high risk of suffering from trauma or distress.

This may present as anxiety, aggression, distrust, or destructiveness and can cause irrevocable behavioral problems over time.

In tandem with this, dogs that are separated from their moms too early can suffer from physical issues such as malnutrition. They are still clumsy and vulnerable to physical harm at this age.

They need the enzymes and antibodies in their mother’s milk to develop into strong, healthy dogs and should not be deprived of it at all if it can possibly be helped.

A healthy, happy puppy is generally one that has weaned naturally and socialized with its siblings and mom before being rehomed.

Frequently Asked Questions about When Can a Puppy Leave its Mom

Can young puppies be fed formula?

If a mother dog is unable or unavailable to feed her puppies, a specialized puppy milk replacement can be bottle-fed to baby dogs. It’s crucial that you purchase the correct product and don’t risk feeding your puppy cow or goat’s milk or human baby formula. Any of these can significantly damage a puppy’s health.

Can I leave an eight-week-old puppy alone even for a few hours only?

Puppies will need to use the loo almost hourly between eight and ten weeks. That aside, this development period is critical for socializing your puppy and exposing it to new stimuli. Therefore, you will need to spend as much time as possible with your puppy in the first few weeks after getting it.

Why does my puppy sleep so much?

At eight to ten weeks, puppies spend most of their time sleeping, up to twenty hours a day. This is because their brains and bodies are developing at a rate of knots, which requires most of their energy. It is no cause for concern, and they will become far more energetic as they get older.

There are only a few things on Earth cuter than puppies, no matter their size or shape.

However, we must remember that they are living creatures in the most crucial development phase of their lives, and care must be taken to give them the best possible chance at a healthy future.

For safety’s sake, err on the side of separating puppies from their moms no younger than ten weeks. This way, you know you have equipped them as well as possible for a good start in their new homes.