What Foxes Eat in the Winter you may ask? Unlike many other creatures, foxes do not hibernate in the winter according to All Things Foxes, which means they must undergo certain adaptations to survive during the cooler months of the year.

This includes growing thicker fur, creating dens or burrows to shelter in, and, most interestingly, changing their diet.

What Foxes Eat in the Winter

During warmer months, foxes often scavenge for fruit and vegetables as well as hunt, whereas during winter, ground-grown food is not as freely available. This means they rely more on hunted prey such as mice, rabbits, voles, and rats. Foxes also store food in caches they can immediately get to when the need arises. 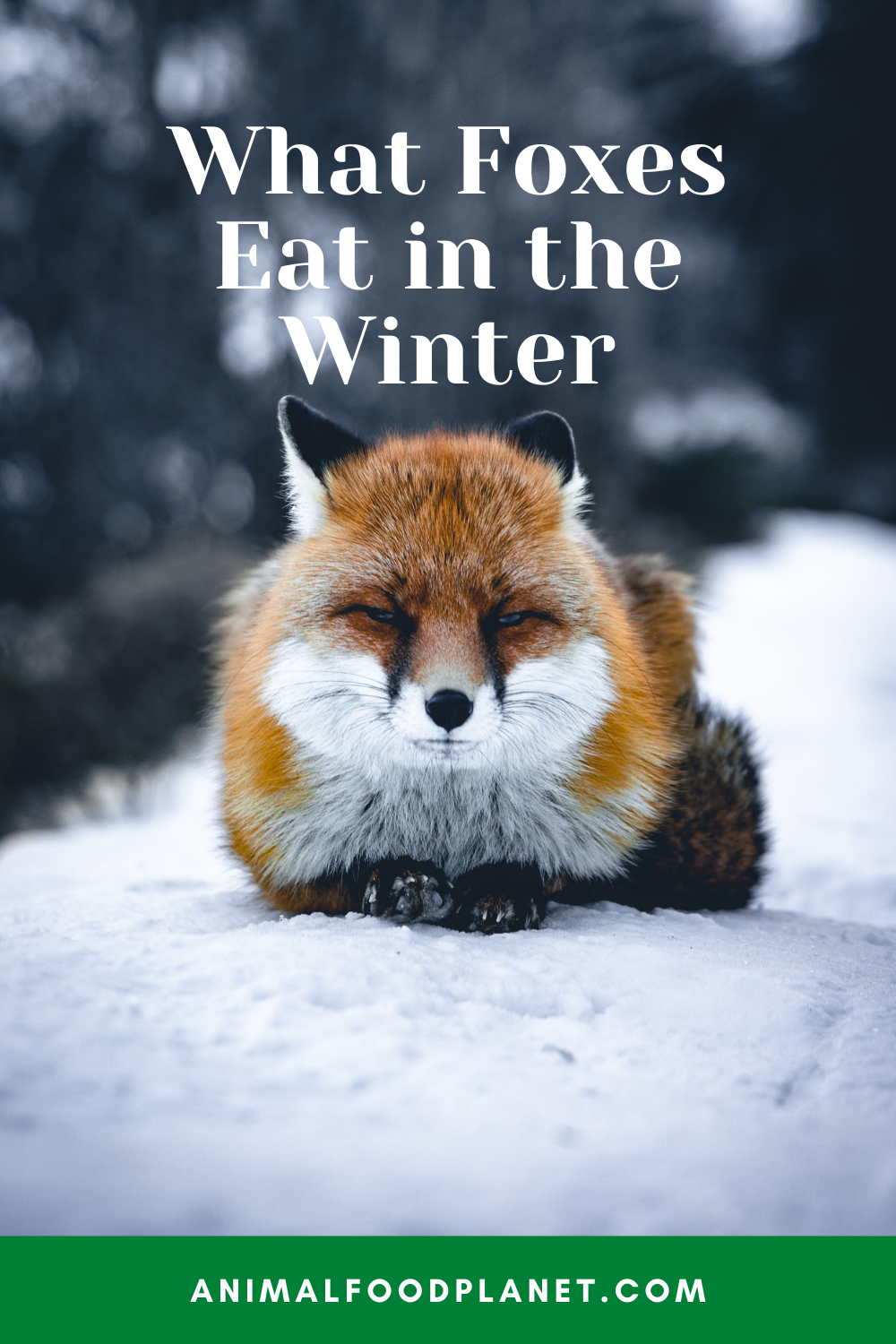 What Foxes Eat in the Winter?

What Foxes Eat in Winter

During winter, a fox’s diet mostly consists of small mammals like rabbits, mice, squirrels, and even rats.

This is because much of their usual diet of corn, vegetables, and fruit is not as available to them, being dormant or shrouded under ice or snow.

Given their limited resources, a fox’s feeding habits change in the winter to include more hunting and less scavenging. Foxes will even eat snakes if they can!

The importance of the hunt during this time cannot be overstated, and this is when a fox’s physical prowess really has the chance to shine.

With their supersonic hearing and exceptional sense of smell, foxes can trace prey in the winter irrespective of inclement weather.

In fact, they can trace the scent of a mouse or a vole over the length of a football field, which is a talent they need to have in order to survive.

In harsh conditions, every catch is important, and foxes will do what they can to find enough food to tide them over.

Worst case, they will even supplement their diets with insects, if need be, although these don’t provide them with enough nutritional value to keep foxes going for very long. 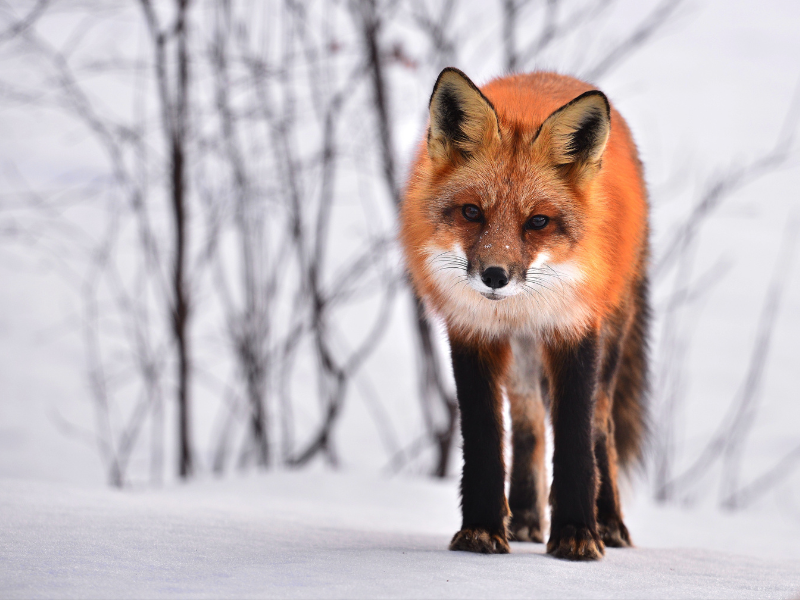 During winter, a fox’s diet mostly consists of small mammals like rabbits, mice, squirrels, and even rats

How Foxes Survive in the Winter

Foxes have numerous survival mechanisms in place to help them through the harsh winter months, including growing thicker fur on both their bodies and their tails.

Indeed, they wrap their tails around themselves when sleeping as a defense layer against cold air and snow, which helps to keep them warm.

They also have a counter-current heat mechanism in their paws, meaning their feet stay at a lower temperature than the rest of their bodies to help prevent too much heat from escaping via contact with the icy ground.

But what do those survival mechanisms have to do with a fox’s diet? The short answer is plenty.

You see, foxes spend the summer and fall physically preparing for the cold winter. During these months, they stock up on food and eat in abundance to help them develop a fat layer that insulates them against the cold, in tandem with their fur.

Summer and fall are also their most active, high-energy months, during which they scavenge and hunt as much as possible, expending plenty of energy in advance of the cooler, slower winter.

When the winter comes, foxes are far less active, preventing them from losing too much heat and using up unnecessary energy. Food is less available to them in winter, which is why they need to conserve as much strength as possible. 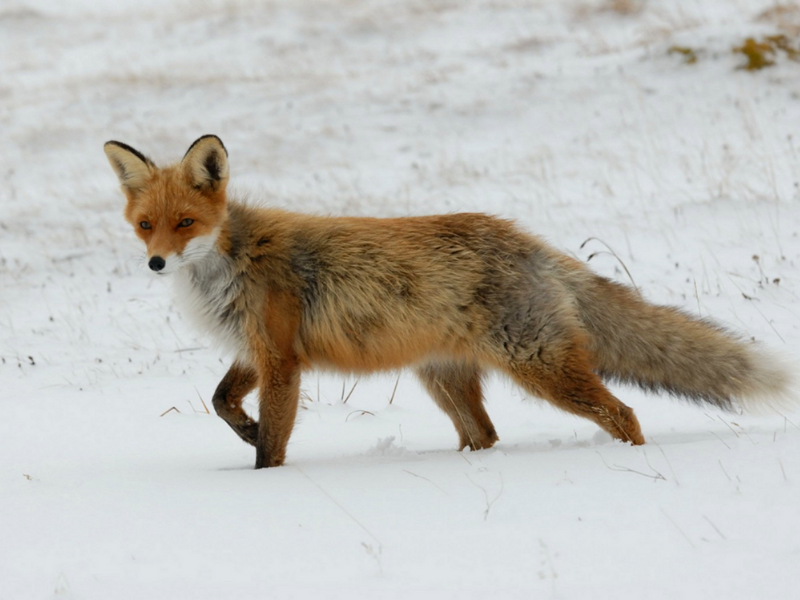 What Fox Food Caches Are

A fox food cache is a temporary hidey-hole for surplus food. If a lucky fox happens to bite off more than it can chew, it will bury its excess in a shallow hole for a day or two, returning for its meal when it’s needed.

Most often, foxes place less perishable items like eggs and bones in their caches, although they’re also known to bury birds or mice in winter.

When it comes to revisiting their stores, studies have shown that foxes rely on their memories to retrace their paths rather than on landmarks.

There are two main types of caching, namely, larder caching and scatter caching, although foxes tend towards the latter.

Larder caching entails stashing all their surplus food in one spot, whereas scatter caching is the practice of spreading out cache holes over a specific territory.

This is more than likely why foxes prefer to scatter caching, as it prevents them from losing their entire surplus in one go.

Frequently Asked Questions about What Foxes Eat in the Winter

How much do foxes need to eat each day?

The nutritional value of what foxes consume is considered more important than how much they eat, but generally speaking, they need between 1 to 2 pounds (500 to 1000 grams) of food per day to remain in a prime physical state.

Will foxes attack dogs and cats?

It is very unlikely that foxes will attack dogs or cats unless they feel cornered or threatened. Wild foxes are extremely timid and are naturally apprehensive of humans and their pets, so a fox will run away if a dog confronts it.

What attracts foxes to gardens and yards?

Foxes are born opportunists, and they will visit yards that they perceive to contain a possible food supply. Most often, this includes gardens where fruit or veggies are grown or where there is an abundance of small prey like insects, mice, birds, or voles.


Conclusion on What Foxes Eat in the Winter

A fox’s diet during winter consists of small mammals like rabbits, mice, squirrels, and even rats. Foxes and fast, sly, and intelligent, which equips them to survive during the winter. While it isn’t always easy, they possess a strong survival instinct that allows them to successfully forage and hunt during winter without using too much of their energy.