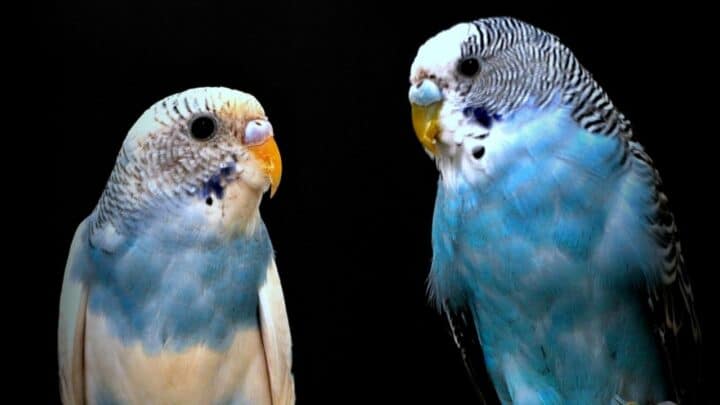 Budgies or parakeets make great pets, provided you are willing to invest the time and effort in caring for them properly.

Unlike some other species of pet birds, it’s relatively easy to differentiate between male and female budgies.

Check the color of the cere, or the area above the beak that surrounds the nostrils. Male cere colors are rose, purple, or blue.

How to Tell The Budgie Gender?

You can tell the sex of a budgie by looking at its cere once they are 2-3 weeks old. Males develop rose, purple, or blue ceres. Female cere colors range from white to brown. Budgies are born with pink ceres. These change color as the bird ages. They can also be blue but is usually a lighter blue than a male’s. Female cere colors change depending on her breeding cycle. 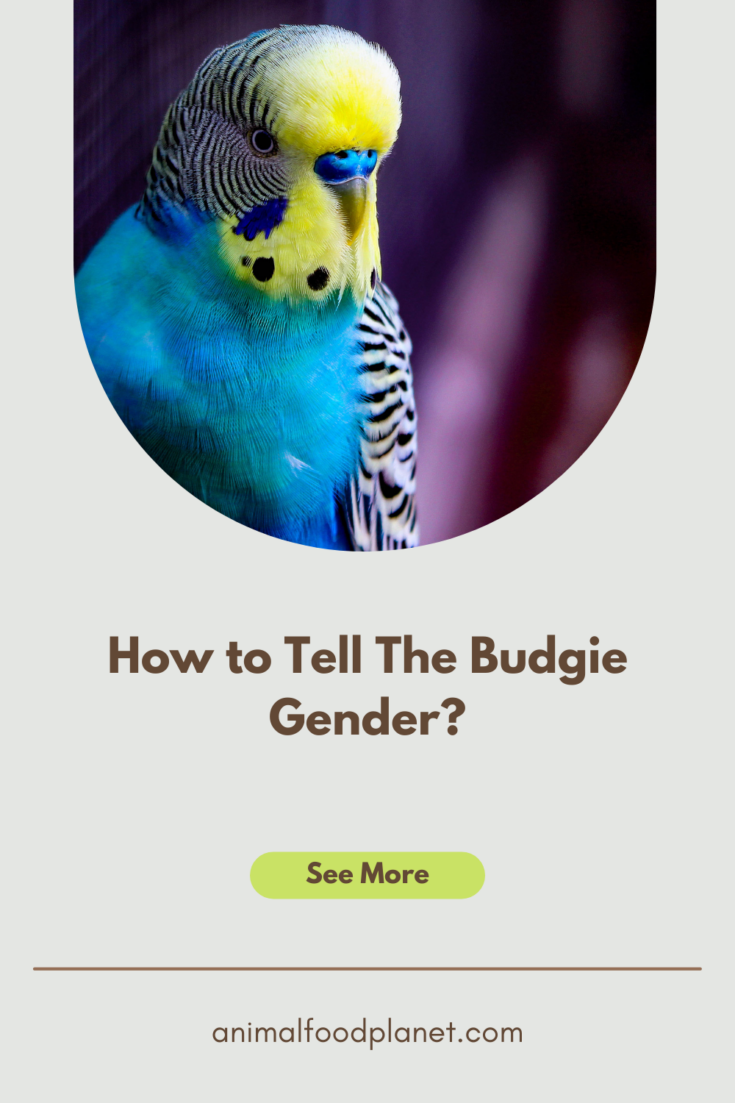 How to Tell The Budgie Gender

Newborn budgies have pink ceres and cannot be sexed

Newly hatched budgies are pink all over, including their ceres. The cere color is often pink for both sexes until they are about two to three weeks old when they often turn blue or grey-blue.

Even males and females from the same nest will have the same cere color shade. However, female budgies usually sport white rings around the nostrils while males have solid-colored ceres.

By the time a budgie is a year old, the cere color is more or less fixed.

Sometimes it’s hard to tell the color of the cere until the baby is one month old. Male ceres can change to a rose pink or light purple.

Things get more complicated when the budgie has been bred to sport a color not found in the wild.

Budgies bred for special colors like pied may take longer for their ceres to develop a true color.

Another example is cinnamon. Cinnamon-colored budgies have pink ceres in both sexes, so it may not be possible to determine the sex until the bird is a year old.

In general, female cinnamon ceres are darker in color than in males.

Another notable cere problem is with albinos. Their cere color is basically the same for both sexes.

This ranges from pink to very light lavender. The female sometimes changes to brown when she is ready to breed.

Because the albino gene favors females, male albinos are very rare. With albinos, the only way to know for sure what sex they are is through a DNA test. 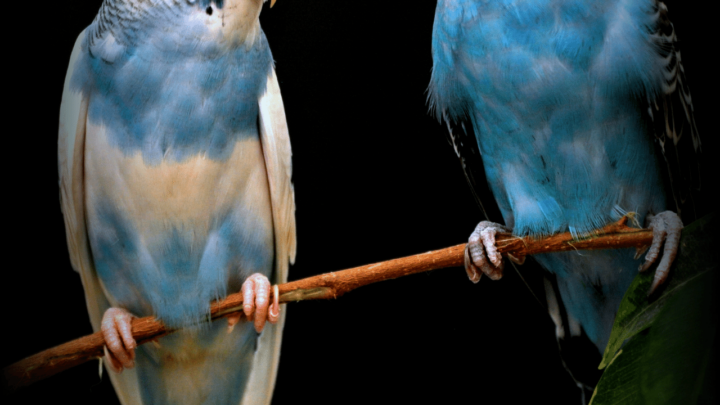 Sometimes looking at the leg and feet skin color helps to determine sex, but only if the bird is at least one year old.

The skin of the legs and feet of a male parakeet is usually (but not always) blue.

A female’s leg and feet skin color are brown or pink.

Sex hormones that determine the cere color also determine the leg and skin color, so the bird has to be at least a year old in order to tell male from female.

And, just like with the cere colors, all bets are off when you have a parakeet with fancy colors. All albinos will have pink skin since they lack any sort of color pigment. 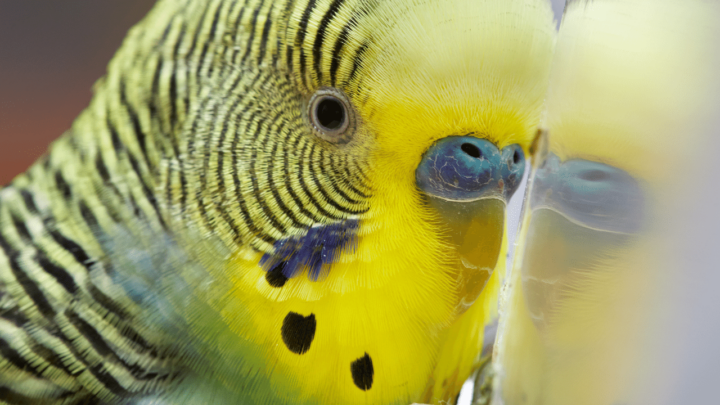 Male budgie are bob their heads more than females

Male and female budgies tend to act similarly, but in general, males will bob their heads more often than females.

They also are more prone to tap their beaks on the bars of cages.

Many budgie owners say that males are more outgoing and are easier to tame than females.

Males are more prone to sing rather than just screech. They are usually more likely to learn to talk, although there have been female parakeets that learned to talk.

Both sexes make a lot of noise, so be prepared for loud pets if you bring home any budgie.

Both sexes will make short, sharp tweets and will chatter to themselves, to other birds, to their reflections, or even to you.

Females chew more than males do. This is not only to keep their beaks trim but gets them ready to chew a hole in a tree to make a nest.

In the wild, the male protects the female as she’s making the nest.

However, if you’ve never owned a parakeet before, it can be really hard to tell what normal chewing behavior is for a male parakeet as opposed to a female.

When All Else Fails 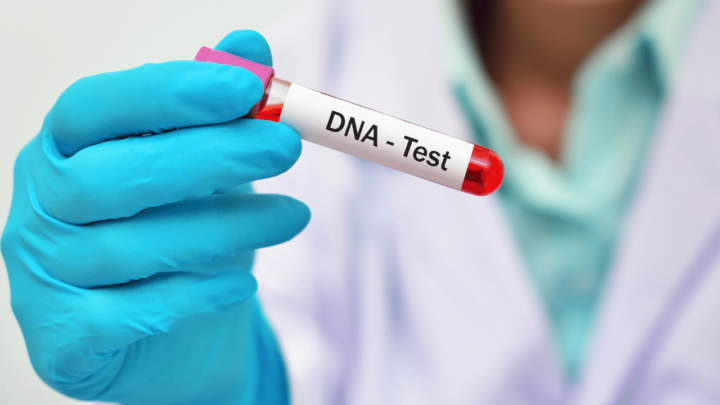 Sometimes it can be very difficult to determine the gender of a parakeet, even if the bird is over a year old.

If you need to know the gender quickly in order to sell, show or breed the bird, then take the bird to a vet to get a DNA test.

This is the foolproof way of determining once and for all if the bird is male or female.

A DNA test is a simple blood test or uses a few feathers, depending on what specific test is used. The test looks at the pairs of chromosomes that determine gender.

Males have a ZZ pair while females have a ZW pair. Some tests will even accurately determine sex from pieces of fresh eggshells.

Once upon a time, birds had to undergo surgery in order to determine their sex.

Since birds do not have external genitalia, an endoscope had to be inserted under the skin to look for the presence of testicles or ovaries.

Thankfully, this procedure is no longer used for parakeets.

For some species of birds, this still has to be done, since there is no other way to tell the gender, although some species like macaws will lay eggs without a male being around.

Waiting for a bird to lay eggs (or not) can take a long time.

Frequently Asked Questions About How to Tell Budgie Gender

My Budgie’s Cere is Black. Is This a Male or Female?

Young parakeets can get a black cere for two reasons. One is that they happen to be producing a lot of melatonin. This often goes away in a month or so. However, this also can be a sign of illness, so it’s best to take a parakeet with a black cere to the vet.

Are Male Budgies Bigger Than Females?

On the whole, male budgies are larger than females. However, the difference is very hard to spot unless you happen to have lived with budgies for a long time. You need to have a male and female side by side in order to really see the difference.

Do Female Budgies Get Brown Ceres?

Female budgie ceres turn brown when they are ready to breed. This color change is normal. The color will often go back once the chicks are raised.

The most sure-fire way to tell the gender of a budgie is to get it DNA tested at a vet’s office. This is often the only option for exotic-colored budgies like albinos. 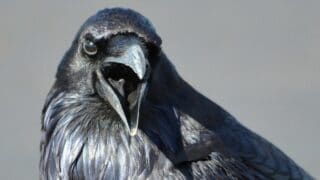 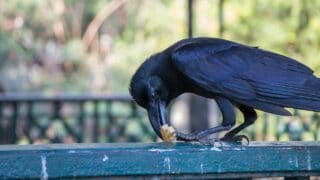 Next
What to Feed Crows? Interesting!

Why is my Budgie Shaking? Oh My!

[…] Budgies are tiny little things, and that in itself can make caring for them nerve-wracking at times. Together with this, they are not able to vocalize to humans if something is wrong. […]