Isopods are detritivores, which translates to they will eat anything!

Isopods are known as nature’s garbage disposals. They will even eat nonfood items such as cardboard, hair, animal fur, etc.

What Do Isopods Eat?

A healthy diet for isopods includes dried shrimp and fish flakes for protein, eggshells, and cuttlebone for calcium, and a large variety of fruits and vegetables. But they will eat anything dead. They will not eat live food. Some caretakers even report isopods eating human nail trimmings and skin shreds.

Fruit and vegetables are a common food source for isopods. That’s the only thing they don’t need to flourish, yet it promotes a healthy community of isopods.

Are they safe to eat? Yes, all. Cauliflower is one of the most popular vegetables in the world. The only vegetable I recommend with discretion with potatoes because a potato shoot produces carbon dioxide.

Because carbon dioxide is thicker than air, it may suffocate isopods. Also, too many fruits and veggies in the habitat will mold quickly.

It won’t hurt isopods, but it’s best to remove it since fluffy mold can trap isopod mancae.

Isopods need a stable diet and access to leaf litter to flourish. 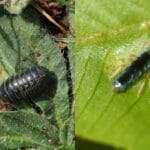 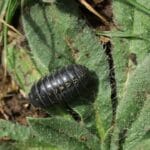 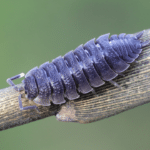 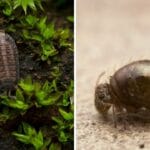 Which leaf litter? In 10 years of raising isopods, I have yet to come across a leaf litter that has killed cultures.

If uncertain, I propose giving the dead leaves to a tiny beginning culture for a month and then giving it to the rest of the culture. So, if a loss occurs, it is significantly reduced.

My cultures have thrived on willow, linden, oak, maple, magnolia, birch, and Russian olive leaves. We used evergreen needles. The isopods scarfed them up.

The only time I’ve had a problem was when leaves were crushed in a damp location and began to smell like ammonia due to lack of air. The isopods that were offered these leaves died.

Do not use leaf litter that stinks like vinegar. Isopod-specific substrates have recently been sold as a leaf litter substitute.

While the enriched substrate is great for isopod cultures, they are a poor substitute for leaf litter.

Aside from “plant food”, they release capsules, which are not toxic to isopods but can injure reptiles or keeper’s hands.

I suggest serving isopods on softened wood. Previously, it was suggested that softwoods such as evergreens be avoided since they are natural pesticides.

However, many isopods favor evergreens as a food source.

Since isopods are crustaceans rather than insects, they are unaffected by the wood. It’s crucial not to give them fresh wood since the sticky tree sap might flow and imprison the animals, but they thrive on rotting wood in general.

I also propose providing calcium to isopods. Some species require much more calcium than others.

Armadillidium and the big Spanish Porcellio, for example, are calcium-dependent.

Calcium may be obtained from a variety of sources, with eggshells being the most convenient for keepers to provide.

The isopods don’t mind if eggshells aren’t clean. Allowing the egg goo to dry is recommended because the isopods can become stuck in it and die.

Crush some eggshells in a corner, then check the enclosure in a few days to see if the isopods are moving the small egg parts around the habitat to eat later.

Isopods are also given cuttlebone as a calcium source, which is eaten significantly more rapidly since it is soft and more easily accessible.

I also provide real bone pieces. Because of their density, they take longer to break down. Over time, more and more small, microscopic bite marks may be seen.

Isopods, in fact, make horrible cleaners for taxidermy, since they steal the little bones first and destroy them. Elkhorns is also another popular alternative in the pastime, but it takes a long time to break down.

If having a complete bone just hanging out in the isopod setup isn’t desired, the bone may be chopped or shattered and thrown in for the isopods (this won’t impact its concentration) and might even make it more accessible to the isopods).

To assist communities to normalize and grow, isopods should be supplied with protein sources. They can thrive without supplementary protein, although many keepers have reported culture crashes or population stagnation and stagnation.

Isopods will eat any type of animal feces, although bigger waste takes longer for them to digest (snake waste could take a community of thousands to break it down).

I regularly give rats and mice that were rejected by snakes to a big isopod colony, which will break down animal carcasses. In just a few days, my Porcellio laevis isopod ate a rat carcass!

If there is a possibility of poisons or pesticides being applied in the region, sources of food should always be avoided. Foods that are healthy for humans are also safe for isopods, therefore fruits and vegetables need only be given a brief washing before being served.

Do isopods hunt for food?

Isopods are opportunistic and will eat anything they can find, including nonfood items. But, they don’t hunt for food.

Are there any foods Isopods cannot eat?

Isopods should not be fed any type of salty food or citrus food. Salt and citrus have a drying effect and the isopods need moisture in order to breathe.

Everything isopods eat has benefits for their health, even if it seems gross or an odd choice of food.

As you probably gathered, they are not picky eaters and they do help the ecosystem with their strange diets.

10 Best Isopods for a Vivarium

[…] peach isopod (Armadillidium Nasatum) is also known as the Nosy Roly Poly. Its colors vary, with some being a […]

Terrestrial Isopods — All You Need to Know about Them

[…] plethora of isopods dwells beneath damp logs and rotting leaves, some of which may be terrestrial isopods such as […]