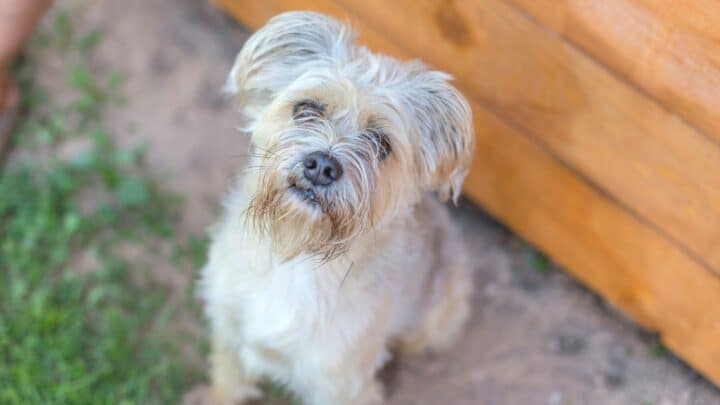 When mulling over which terrier you would want for your household, there are just too many.

From the Bull terrier, to the taller Airedale, there are lots of variations, each with their own personality. But have you heard about the more elusive Dutch Smoushond?

This breed of terrier also goes by the names Hollandse Smoushond and Dutch Ratter, exhibiting many of the classical terrier traits while being extremely affectionate.

Does this mixture of tenacious and sweet make for a household?

Brought back from the brink of extinction, the Dutch Smoushond is collectively known by few for being loyal, social, free-spirited, and receptive. They have moderate energy levels and can comfortably be housed within an apartment, as long as they get enough mental and mental stimulation. The Smoushond is relatively easy train with positive reinforcement and treat rewards. Health concerns are fairly few as this is an elusive breed. All of these qualities allude to a worthy candidate for the right owner!

This terrier’s physical appearance can be summed up by their title. Interestingly enough, “Smous” means beard in Dutch, while “hond” translates to hound. This is due to their highly complimented face.

They sport a wiry coat with the addition of a beard, moustache, and unkempt eyebrows. The Dutch Smoushond is the pinnacle of “bearded”.

Their course, wiry coat, as with most terriers, was originally intended to protect the skin from anything that could harm them in the brush such as a rodent or thistle.

Although on the smaller side, the Dutch Smoushond is rather hardy, weighing in at around 22 pounds. Their bodies are compact, properly proportioned, and square.

The Smoushond is known for having a particularly long snout, flopped triangular ears, and a rounded nose.

The overall standard of this breed incorporates elements of the German Schnauzer, Border Terrier, Brussels Griffon, and the Poodle.

Terriers, as a whole, are known for being enthusiastic, driven, and tenacious. The Smoushond does share in some of these qualities while taking on “softer” temperament traits.

They are social, especially when socialized properly from a young age. These dogs also tend to be quite obedient, affectionate, and energetic.

Another admirable trait is their ability to cope with different situations, both in and outside the home. Terriers can have a reputation of being reactive.

They were bred to have impressive senses that can detect varmint after all. The Dutch Smoushond has a tendency to be mellower and takes things that happen in stride. This trait hints at their intelligence level.

These small, wire-haired dogs are entirely devoted to their family. They do not like to be far away from their owners for a long period of time. This also makes them particularly obedient since they want to please their household members.

Being able to keep up with a carriage calls for a fair amount of energy, especially when you’re only about 14 inches tall. It also isn’t easy work to chase down rodents.

Most terriers, like many other working breeds, have higher energy levels then their small counterparts. The Dutch Smoushond is no exception to this rule.

Those who are considering owning this breed needs to take into account the amount of exercise involved in keeping them happy.

There tends to be a misconception that smaller dogs mean that they won’t need as much physical exertion. That simply isn’t the case! A long walk around the neighborhood is a good start.

Depending on a few factors such as age and the individual temperament, you may have to throw the ball around for a bit to completely wear them out.

The physical need of a dog is one thing, but one should also provide mental stimulation. The Smoushond is intelligent, meaning that they should be challenged daily.

A dog that does not have mental enrichment will oftentimes find another outlet, typically by destroying the house!

This can be accomplished with some indoor playtime. You can also incorporate the use of toys designed to stimulate a dog’s brain. Making your dog work for something instead of taking the easy route is usually a good way of doing this.

A good example is making them find their food when it scattered around the house.

Their ancestors were accustomed to living among the stables where they freely roam to fulfill of their purpose of varmint control. You do not need to have a fully functioning farm to keep a Dutch Smoushond.

These dogs are known for being highly adaptive. This small to medium sized breed is just fine living in a smaller abode.

The best option for a Dutch Smoushond would be a house that is equipped with a backyard. If you do not have this option, as you’re in a flat or apartment, don’t fret. The key to owning a Smoushond is meeting their exercise needs.

You do not have to own a backyard to keep them tired! Simply incorporate longer walks, and some play time inside.

Another aspect to keep in mind is that they tend to bark at disturbances. This isn’t true for all Smoushonds. You can always condition your terrier to be less reactive with enough training.

Compared to most other breeds in this group, the Smoushond is relatively levelheaded, so this should be fairly easy as long as you are consistent and clear in what you want.

Additionally, these small dogs are privy to separation anxiety because of how committed they are to their humans. This is a difficult problem to address until tackled early on.

If your Dutch Smoushond is older, there is still hope as long! Just handle the training with lots of patience and positive reinforcement.

Terriers are classified as being quite intelligent. It makes sense when you consider what they were programmed to do. It may seem quite simple to chase after a varmint, but that takes an incredible amount of critical thinking and fast reflexes.

These dogs wouldn’t be able to do half of what they did without those brains!

On top of possessing the smarts of a typical terrier, the Dutch Smoushond has a number of qualities that would aid in the process of training. They are receptive, eager to please, loyal, amiable, and tolerable. Despite all of these traits, training should be handled in a careful manner.

The Dutch Smoushond, like any terrier, should be given training that is consistent, clear, and frequent. This sets your dog up for success in the long run. These canines in particular are more receptive to training that is centered around positive reinforcement with the use of treats as the motivator. They do not respond well to a firm voice and hand.

Certain breeds have a number of problems that are specific to their group. For instance, Yorkshire terriers can be known to bark excessively while Labrador Retrievers oftentimes struggle with jumping up on houseguests.

The Dutch Smoushond’s biggest faults are their likelihood to be nervous around strangers, bark, and separation anxiety. Tackling each of these can be a challenge in itself!

With being aloof around strangers, you’ll want to expose your dog to all sorts of different people, places, and things from a young age. This will give them confidence. Barking and separation anxiety take a bit more preplanning and attention. If any of these problems seem to be out of your ability, we suggest that you consult a professional trainer.

Something to note is that this breed is extremely rare and elusive, meaning that there isn’t really any consistently reported diseases or aches that these dogs have. What we do know is that they seem to be relatively healthy across the board. The average Dutch Smoushond lives anywhere between 13 and 15 years of age, which is respectable for a small dog.

Despite being quite healthy overall, there still may be underlying health issues that simply have not been recorded. To gain a better understanding of what might happen, we’ve pinpointed some of the most common health concerns that their close relatives possess, namely the Pinscher and Schnauzer.

Looking at the general appearance of a Dutch Smoushond, you may see the unkempt coat and assume that they don’t need much in terms of grooming.

This is actually spot on! Generally, these dogs don’t need a grooming session more than once per week. Keep in mind that this should be done with a steel comb so that any tangles or mats are also removed, as well as a brush to distribute oils throughout the coat.

The Dutch Smoushond is a moderate shedder, meaning that grooming will cut down on the amount of hair around your home.

There is also a practice referred to as “hand plucking”, where the hair is pulled out towards the root to stimulate the growth of new follicles. These terriers should have this done twice a year. You can either opt for a groomer’s professional aid, or learn how to do it yourself!

The only way to go about getting a Dutch Smoushond is to find a reputable breeder. It’s important to understand that many have tried to recreate this breed and failed, coming out with something similar but not quite right.

As with purchasing any dog, carefully research who you are choosing to go with in terms of a breeder. Ask them plenty of useful questions to ensure that they strive for the well being of their dogs.

This also includes ensuring that the healthiest dogs contribute to the breed as a whole. Unforunately, it is highly unlikely to find this breed outside of the Netherlands.

The History of the Dutch Smoushond in a nutshell

As with several breeds, it is near impossible to pinpoint the very first Hollandse Smoushond. What we do know is that they rose in fame during the late 1800’s, where they were commonly referred to as the “Gentleman’s carriage dog” or simply the “Gentleman’s breed”.

Although found in the regions of Germany, the true origin of this breed is the Netherlands.

As one of their nicknames suggests, these dogs were given the task of accompanying a carriage. Much like the Dalmation, there would be a pair of Smoushonds traveling along the backside of the carriage to show that the people within had stature and class.

True to the terrier group, they also tended to rodents and other pests, mainly those around the stable. This was their primary purpose, the carriage

The unfortunate event of World War II caused a sharp decline in the breed’s population to the point of near extinction.

There were attempts made to salvage what little was left of the Dutch Smoushond, but no serious progress was made until the year of 1973 when two Dutch women, Mrs. Mia van Woerden and Mrs. Riek Barkman-van devoted themselves to the cause.

They could not find any purebred Smoushond’s at this time since any attempts to save the breed had been by mixing other terriers.

Instead, they interviewed judges who remembered the little wire-haired dogs and cross-bred dogs with a similar appearance until they ended up with a Smoushond lookalike.

The United Kennel Club officially recognized the Dutch Smoushond in 2006.

This extremely rare breed was valued enough to be brought back from the near brink of extinction, and for good reason! They are lively terriers with a heart of gold, being able to withstand a number of challenges all while being loyal to their owners.

They need a fair amount of exercise, both mental and physical. Some can struggle with separation anxiety and excessive barking.

Overall, these terriers earned their name as the Gentleman’s breed, quickly earning their place in the family as a hard worker! 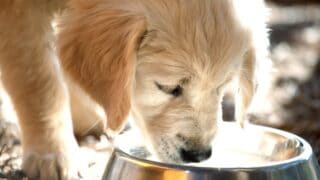 Previous
Original Labrador Vs. Mixed Labrador: How To Differentiate? 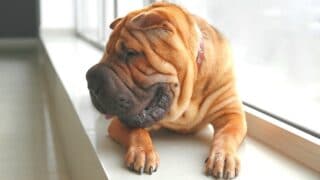