Among all the animals in this world, dogs are the ones chosen to sniff out illicit substances, ammunition, and human scents.

It is because dogs have such an astonishing sense of smell. Our canine pals can sniff out scents several kilometers away. They can even smell out items buried below the ground.

But, the question is, how far can a canine’s sense of smell go?

How far can dogs smell?

On average, dogs can smell things within a 20-kilometer range. Canines can even smell items buried up to 40 feet below the ground. However, while it’s astonishing how pups can identify scents from such distances, the wind can affect this. If the wind blows in the direction towards the dog, they can smell items farther from the measurements mentioned above.

Why do dogs smell better than humans?

Humans breathe and smell simultaneously, but dogs carry out these actions separately. Hence, it’s easier for canines to differentiate between scents they smell despite the distance.

Also, dogs have a group of tissues in their noses that separates smelling from inhaling. This is one of the reasons why experts consider a dog’s sense of smell to be 100,000 times stronger than that of humans.

In fact, humans only possess about 6 million smell receptors while dogs have 300 million receptors. Imagine that! 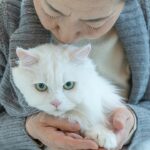 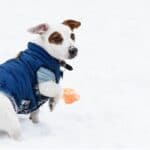 Another reason why dogs are better at smelling is because the part of the brain dedicated to processing scents is 40% larger in canines than in humans.

You can try using a diluent to suppress the smell of a particular ingredient, but canines will still manage to sniff it out.

For instance, you can suppress the smell of cigarettes with menthol. With this method, humans can’t single out the said scent.

As for dogs, they will still perceive the smell of tobacco even if you leave behind a long trail of menthol candies. Even if the ratio of tobacco to menthol is 1 – 2 trillion, pups will still pick up the tobacco’s scent.

Other than the amazing things a canine’s nose can do mentioned above, there are still other fun facts about their ability that we should know.

How humans can benefit from canines’ superb sense of smell

In many ways, dogs’ strong sense of smell is of benefit to humans. Here are some of the ways we have been taking advantage of dogs’ sense of smell.

This will enable you to call the fire department or evacuate your family if your property is threatened.

Sometimes, while cooking, you may be distracted by a strange noise coming from outside. And when you rush to find out what it is, you’re likely to forget what you’re cooking.

But, thanks to dogs, they’ll manage to alert you even when the food’s still starting to burn.

You must have heard of hunting dogs.

What do they do?

These dogs sniff rabbits, foxes, and other games. And when they do so, they’ll alert the hunter.

With your hunting dog beside you, you’ll only have to dig rabbit holes that have rabbits in them because your dog will have signified their presence in the holes.

Searching for a missing person

When searching for a missing person, your dog can help you follow the trails of that person by sniffing his scent. As you get closer to the person, the scent will become stronger.

Dogs can also use this incredible ability of theirs to search for criminals on the loose.

As mentioned earlier, dogs can smell drugs buried 40 feet below the ground. So, if anyone hides drugs deep inside a luggage, dogs will still sniff it out effortlessly.

That’s why they are used in the airport and at borders to catch criminals trying to traffic drugs.

Apart from drugs, dogs are also used to sniff contrabands. Thus, the police and military take advantage of this skill of theirs to sniff out explosives and ammunition before the planes fly.

Thus, if you’re asked to choose a single species of animal that is indispensable to humans, dogs definitely fit the very definition of the word.

Why your dog’s sense of smell may diminish

As dogs grow older, their cells, tissues, and organs become weaker. The rate of the replenishment of dead cells reduces.

This also affects their sense of smell. It will no longer be as sharp as it used to be. That’s why in the military, any sniffer dogs whose olfactory ability begins to dwindle will need to retire.

Allergies can also weaken a dog’s sense of smell. While allergens can mask scents, nasal conditions can block the ability to smell.

Some of the conditions that can impact your dog’s ability to smell are influenza or sinusitis. At an advanced stage, these conditions may destroy your dog’s olfactory sense permanently.

A dog’s nose has to be wet always because it captures odors or scent particles and allows him to smell better. If the nose gets dry, it won’t be able to capture as much particles as it used to. So, his ability to smell will reduce tremendously.

When a dog is tired, he will breathe heavily or pant. During this period, his ability to smell will be reduced by 40 percent.

You don’t need to worry about this because it is temporary. After resting, he’ll regain his olfactory ability fully.

Remember, dogs can smell things from within 20 kilometers, as well as items buried 40 feet beneath the ground.

You also can’t confuse a dog by masking the scent with another one. He’ll perceive both of them separately.

Furthermore, he can focus on a particular scent or odor and ignore the others.