How do Snakes Move? That is a Good One! 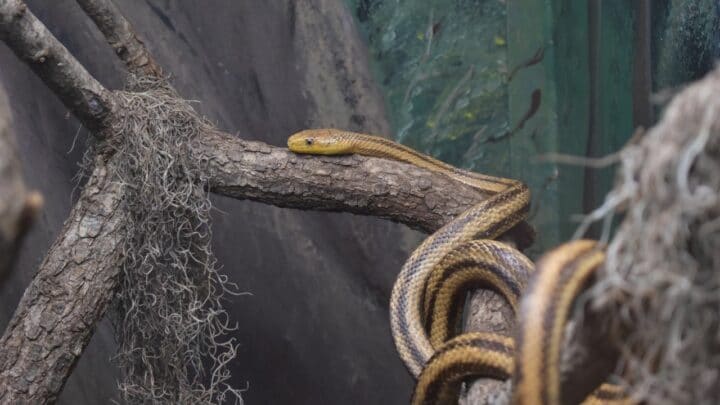 Snakes are incredible creatures. With over 3,000 known species, defining exactly how they move into one short answer can be difficult because biological mechanics are at play.

All snakes, from the smallest garter snake to a giant anaconda, have very flexible bodies.

Still, it seems odd that something without legs can move so efficiently through the land it inhabits, leading many humans to ask, how do snakes move?

How do Snakes Move?

Snakes typically swim, climb, and slither using the strength of their bodies, bending their spine into serpentine coils and using objects around them to push off and propel them forward. However, their movement is incredibly diverse, varying by species. In short, the action may be different, but the concept is the same.

Snakes move using the natural flexibility of their bodies. Snakes have a long spine attached to their ribs. The muscles that connect to the ribs help snakes move forward.

In addition, they can coil and uncoil their bodies, using that motion to get them where they need to go. Many people don’t know that snakes can also move in a straight line, kind of like a train moving through a tunnel.

Though moving forward without coiling doesn’t seem to be the preferred method of movement for most snakes, they can use specialized belly muscles to keep them straight instead of using their spine.

No matter how a snake is moving, every bit of it comes from the ability they have to move their bodies through muscles, as well as fantastic flexibility.

Snakes can move so efficiently by using their belly scales and ribs to push backward, alternating sides. Larger snakes may use both sides of their body at the same time, but this alternating of sides is likely why you’ve noticed that snakes seem to tip and dance while they move along the ground.

The Many Ways Snakes Move

If you’ve spent any amount of time with a snake, you probably know it’s pretty incredible the way they can go from stillness to speeding along a forest path without legs to propel them forward.

No matter the type of snake, watching them slither and slide is always a sight to behold.

Using their body to move laterally, in a similar fashion to a wave, is how snakes successfully navigate themselves through the water.

If you take a moment to watch a snake swim, whether it be in real life or on YouTube, you’ll notice that the body consistently twists into an “S” shape.

A snake will create undulations to swim, starting with the head and then moving down the rest of the body. When navigating very smooth land, snakes will use this same concept of movement.

Snakes crawl or slither by pushing their body muscles against the ground. The speed at which they can do this depends on the type of snake, but species like the Sidewinder and the Black Mamba can move at speeds upward of 19 miles per hour.

Technically, it’s difficult to say that snakes crawl because they don’t have the external limbs to do so. Slither is a much more appropriate term.

Sidewinders and other lateral moving snakes use these same muscles to move forward, but they don’t use their whole body.

Instead, they lift the front of their bodies off the ground and use the rest to slither and slide along the sand, creating a different movement visually.

Yes, snakes can climb! In fact, many snakes love to climb, primarily those that live in dense forests and mountainous regions.

Snakes climb trees quite efficiently, either by using small pieces of bark to leverage their bodies and help them up or using a hold-and-release movement called concertina locomotion.

This phrase is expected in the snake world, but if it’s confusing to you, you’re not alone. Think of the concertina locomotion movement as you would a human climbing a rope in PE class.

Snakes will grip two spots on the tree or rocks they’re climbing by forming an “S” with their bodies in those particular spots, keeping them from falling as they go upward.

It seems unnatural, but many snakes are excellent climbers, such as the Brown Tree Snake, spending their days basking in treetops waiting for prey!

How do snakes move?

Snakes of all species can navigate the ground using their scales, belly muscles, flexible bodies, spine, and ribs to push them forward. They will also use objects along the way to push off, both on the ground and while climbing.

Do all snakes move fast?

Not all snakes move fast. Different species move faster than others, and more giant snakes are typically slower than smaller ones.

Snakes are great climbers, and they can climb walls, but not just any old wall. The wall in question must have divots they can grab onto, such as bricks, to make the climb successful.

The ability to move so well without legs is the reason that snakes can thrive.

This adaptation is evolution at its finest, creating a creature that can move through rocks, trees, smooth and rough terrain, and water without problems. Snakes are amazing! 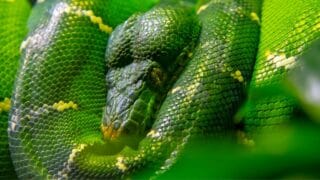 Previous
When Do Snakes Hibernate? Ooh, Let Me Prepare For It! 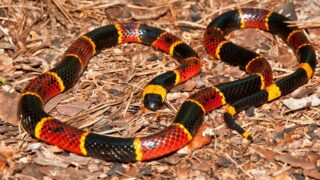 Next
What Does Coral Snakes Eat? Amazing!

[…] coral snakes are venomous and deadly, it is highly unlikely that you own one as a pet. However, you may still be […]