All animals have an innate communication system, and snakes are no exception to that evolutionary rule.

Animals need to communicate with each other from time to time, regardless of species, so it makes perfect sense that they each have their own means of doing so.

Snakes have to express themselves to other species of snake, predators, and even human beings.

This desire to understand how snakes talk to the world around them has left the internet asking how do snakes communicate?

How Do Snakes Communicate?

Snakes communicate with their surroundings through the use of their Vomeronasal System. This internal system uses the tongue’s flick to collect, analyze, and leave pheromones. Snakes can then let other snakes know their gender, age, and even their health or phase of reproduction. With humans and predators, snakes communicate through body language and vocalization.

One of the major roadblocks to humans fully understanding animals and why they act the way they do, is lack of communication.

We can study them, observing how they go about everyday life, but they’re bound to express behavior that we don’t understand somewhere along the way.

Snakes are not the only animals in which we can’t always pinpoint their behavior. Even the domesticated animals we know so well, such as dogs, cats, and horses, sometimes throw us a curveball when it comes to behavior. 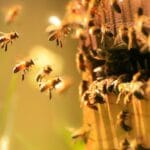 Through studying snakes, scientists and researchers alike have found that their communication with one another is nearly flawless.

Different species of snakes use the same methods of communication. However, snake behavior may be misread when it comes to humans and, occasionally, other animals.

Snakes talk to each other through the collection and then release specific pheromones. They pick these up from the world around them, analyzing them and using them to let other snakes know almost everything there is to know about themselves.

Pheromone expression through the use of the vomeronasal system is complex and nothing short of incredible. All snakes use this method to communicate with one another, rendering physical stature and vocals unnecessary.

Snakes may become physical during combat, but even then, pheromone expression is utilized. It’s rare to see snakes bite each other during a fight, though it’s not unheard of.

When snakes get physical, it’s usually because they are trying to communicate with something outside of their species. Humans, other animals, and predators aren’t likely to pick up on the intricate messages that snakes send through their pheromone expressions.

The language barrier is hard to break, so snakes will become physical to express the way they’re feeling. A nervous snake, for example, may hide or try to make itself look larger by raising the front of its body off the ground in an attempt to intimidate whatever is causing the nervousness.

Snakes will show their fangs and the insides of their mouth before striking, using physical cues as a warning to whatever danger is near. Smaller snakes will coil up and hide as best they can in the face of danger.

Some snakes will try to get away from you as quickly as possible, while others, like Rattlesnakes, will stay and see the fight through.

Domesticated snakes may even show affection towards their owners! However, if you come across a snake in the wild and he’s showing you physical cues to back off, leave him alone. In fact, it’s best to get out of his way regardless.

Snakes can make sounds to communicate, and they will do so if they deem the situation necessary. Snakes may hiss or rub their scales together to create a raspy sound that sends a warning signal to any external threat that they’re too close.

These sounds are the way a snake tells species outside of their own to back off.

Many of us are familiar with the sound a rattlesnake makes, but hissing and rubbing scales are common in snake species that don’t have a rattler or other bodily ways of vocalizing themselves.

Remember, snakes don’t have to make these sounds for each other, so if you can hear a snake vocalizing, back away because chances are it’s for you!

How do snakes talk to each other?

Snakes communicate through their pheromones, and only other snakes can understand this. It’s a complex process that involves the collection, analysis, and release of pheromones.

Can snakes talk to humans?

Snakes can talk to humans through their body language and vocals. If you don’t spend much time around snakes, you might not understand these methods. However, snake researchers and enthusiasts are typically very good at understanding their snakes!

How do snakes communicate with predators?

Most times, snakes will hide or back off from their natural predators. Sometimes, a situation might arise where this is impossible, so snakes will vocalize, hiss, make themselves larger, and attempt to look as intimidating as possible to avoid an attack.

It goes without saying, but we’ll say it anyway, that snakes are fascinating creatures.

They have a communication system that’s all their own, allowing them to give detailed information to one another without making a sound or physical movement.

So, while we might not understand why a snake behaves a certain way, you can bet the snake next to him totally gets it!

How Intelligent are Snakes? Would Have Never Known!

[…] snakes have some level of intelligence. If they didn’t, they wouldn’t be able to […]