There are several different varieties of Siamese cats and though they are similar in many ways, they do have their differences, as well.

Colorpoint cats more generally are another term for cats that have light-colored fur, but darker fur on their tail, feet, face, and ears. Both Chocolate Point and Seal Point Cats fall under this category.

What’s the difference between chocolate and seal colorpoints on a Siamese cat?

The most significant difference between the Seal and Chocolate Point Siamese cats is their markings. The two cats have differing color points, different paws, and base coat colors. The color of their paws at the very least can usually let you tell them apart.

It Is Difficult to Tell Them Apart As Kittens

The first thing that you should know is that chocolate point Siamese cats originated as a genetic mutation of seal point cats. That is one main reason why they share so many similarities and it can be difficult to tell them apart.

It’s true especially when both are kittens. At that point, only minor differences exist between each cats’ pointed color patterns.

However, differentiating them becomes easiers as each type of cat gets older. One part of this is the fact that seal point Siamese cats do not have the exact same base color for their entire lives.

Their base color is a pale cream color when they are kittens. Their coat becomes darker as they get older, however. 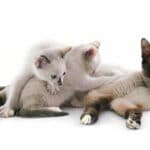 It’s one way of differentiating the two cats. A chocolate point Siamese cat’s coat is ivory-white and this color will not change as it gets older.

You Can Differentiate Them Based on Their Pointed Colors

This includes the nose leather, paws, tail, ears, and facial masks of the two cats.

The Changes in Their Coat Colors Differentiate Them

There are certainly differences in coloration between these two types of Siamese cats, but the changes in their coat colors over time are perhaps the most obvious differences.

Of course, coloration is something that can certainly differ between cats.

However, in contrast, the coat color of a seal point Siamese cat becomes darker as they age.

As a result, the change in coat color or lack thereof is one more obvious way to tell the difference between these two Siamese cats.

Their Paw Pad Colors Are Different As Well

These paw pads are a pink-brown color.

Are both of these kinds of Siamese cats friendly?

Both chocolate and seal point Siamese cats are quite friendly. That is why they are such a popular breed of cat for people with families since they tend to do well in these situations.

Do seal and chocolate point Siamese cats have the same lifespan?

There are many similarities between these two varieties of Siamese cats and this is certainly one of them. A chocolate point Siamese cat and a seal point Siamese cat will both live roughly 12-15 years, so the answer to this question is definitely yes.

How often do I have to groom seal and chocolate point Siamese cats?

Thankfully, neither of these types of Siamese cats require too much grooming. If you groom them once a week, that should be plenty to make sure their fur is fine. Of course, they groom themselves, too.

Both cats are friendly and intelligent, so it’s up to you what fur color you prefer.

So, if you’re raring to have either of these adorable Siamese cats, you better check out how much Siamese cats cost so you can prepare ahead.

How Long Do Siamese Cats Live - The Answer

[…] delicate Siamese cat seemed to be etched in my memories from my early years right into my late teens, and when people […]

Is It Healthier for a Cat to Breed Before Being Spayed or Neutered?

[…] you are a cat owner, you may have heard that it is healthier for your cat to have a litter before being spayed or […]