Isopods are fascinating creatures—these the marine creatures that do not have backbones. You can see the most common example of isopods as crabs and shrimps, both of which are eaten worldwide.

According to experts, there are around 10,000 species of isopods and are one of the most morphologically diverse crustacean groups.

Isopods come in various sizes and shapes, ranging from a few micrometers to nearly half a meter in length. The order (Isopoda) has a variety of habitats, too, from the deepest seas to mountains and deserts.

But, have you ever wondered if isopods can see their surroundings?

Well, we’ll uncover that for you in this article, so better stay and keep reading!

Given the environment that they live in, isopods can’t see well. All isopods have two pairs of antennae, four sets of jaws, and compound eyes. Compound eyes are a visual organ found explicitly in insects and crustaceans. The eyes consist of tiny photoreception units made up of photoreceptor cells called the ommatidia, a lens, and cornea. These photoreceptor cells help isopods differentiate between brightness and color. However, their lenses move rapidly in and out of focus, ultimately giving them a better view of their environment.

Scientists initially believed that isopods have poor image resolution because of thousands of “lenses”. 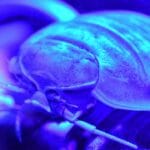 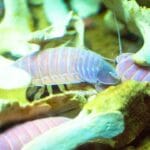 But a recent research conducted in the Biomedical Science Department of the University of Sheffield suggests that compound eyes also have high image resolution.

This has a lot to do with how photoreceptor cells in compound eyes respond to image motion.

Researchers have found that the photoreceptor cells or “lenses” move swiftly in and out of focus.

As a result, isopods get a sample image of the overall surroundings in a much more satisfactory quality than expected.

How do Marine Isopods See

To date, there’s no systematic study about the distribution of crustaceans that have eyes and those that are blind with regards to sea depth.

However, it’s already known to researchers that most of the deep-sea isopods are blind and that their intertidal counterparts have well-developed eyes.

There are two types of apposition eyes. Apposition eyes have a lens that focuses light from a particular direction on a structure called the rhabdom, while the ommatidium’s dark wall absorbs light from other laws.

The best sample of an animal with these apposition eyes is the mantis shrimp.

In the other type of apposition eye, found in Strepsiptera, each lens creates an image, which is then combined in the brain.

This is what researchers refer to as the neural superimposition eye or schizochroal compound eye. But, despite its name, it is still considered an apposition eye.

In a refracting superposition eye, there isn’t a sidewall, but you can find a gap between the rhabdom and the lens.

Each of the lenses collects light at a particular angle to the axis and then reflects it at the same angle to the opposite side.

Nocturnal insects mostly use this type.

In the curved superposition compound eye, however, each of the parabolic facets focus the light from the reflector to its sensor array. This system usually is seen in arthropods like mayflies.

Lobsters, crayfish, prawns, and shrimps are the only ones that have reflecting superposition eyes.